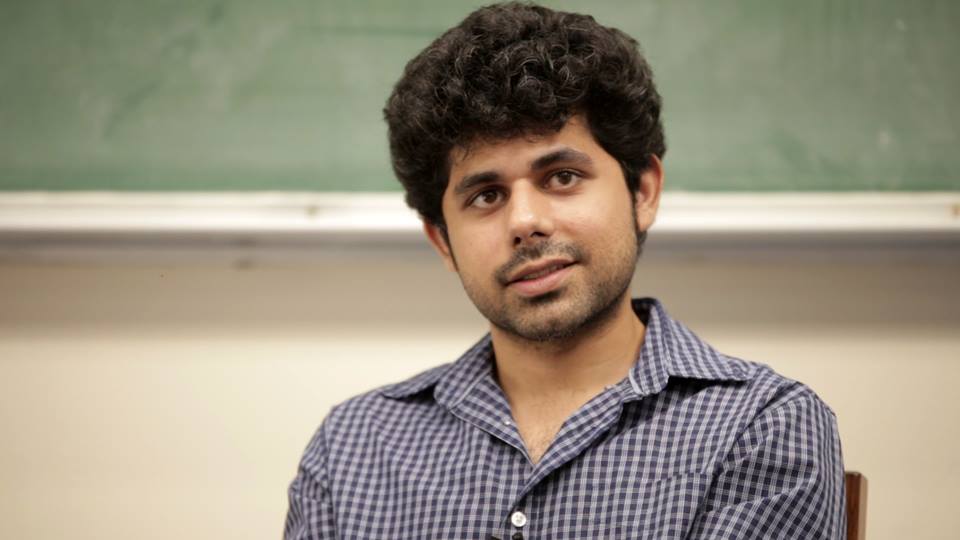 LAHORE: Prominent academic and youth activist Ammar Ali Jan on Friday announced in a Facebook post that he had been told by the Director of Punjab University’s(PU) Sociology department to “’disengage’ from teaching or coming to campus. In other words, I HAVE BEEN FIRED FROM PU!”

Ammar stated that he was teaching at the PU since June 2017 as Assistant Professor and had been repeatedly “accused of giving ‘unnecessary encouragement’ to students due to which they are becoming ‘needlessly vocal’”.

“Finally, I was told by certain quarters that I should stay away from Manzoor Pashteen and the PTM, otherwise I will face ‘dire consequences’”, he wrote in his Facebook post.

However, PU claims that Jan had actually never joined under the contract terms. A letter dated January 4, 2018 issued by Muhammad Kashif Nazir, Deputy Registrar (Admin-1) for Registrar, states Jan had been offered a contract on September 24, 2017 for a period of approximately 9 months, ending June 30, 2018, but he did not submit his joining report within the first month upon which the offer automatically stood withdrawn. 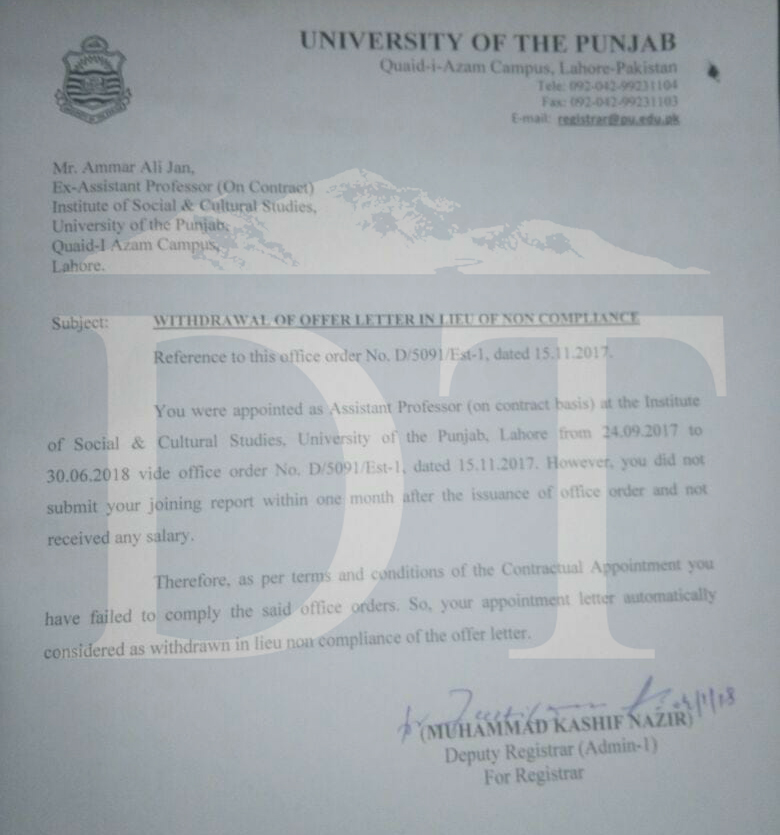 Ammar Ali Jan rejected the statement categorically. Talking exclusively to Daily Times, Ammar said that he kept teaching at PU from October 2017 till April 2018. He added that he had taught five different courses to a total of 300 students at various levels from October last year till March this year, and then was given another two courses in the current semester, where he was also supervising 2 PhD students.

“Do you give five subjects to a teacher on visiting faculty? How could they give me PhD students’ theses to supervise if I wasn’t under the contract?” Ammar responded. “I officially coordinated the Cultural Festival recently. I was the Sports coordinator and we recently held the Sports Festival too. How was I given all these official duties if I hadn’t joined?”

He blamed internal faculty politics for the decision and said that certain teachers at the campus were unhappy about campaigning for women rights, anti-harassment, student rights etc., in raising which his role was pivotal. He said that the senior faculty members just couldn’t tolerate dissent.

When asked if he suspected some behind-the-scenes arm-twisting by certain institutions or people in power, Ammar said it couldn’t be ruled out but didn’t believe it to be the reason behind his removal. “Even I receive threats. But I deal with them. If I can deal with them, you are the Vice Chancellor of a university, with a bigger social clout and obviously more contacts than I would have. I believe the faculty politics is at the heart of it”, he added.

It is pertinent to mention here that Ammar was not paid any salaries at all during the 9 months of his services at the varsity. He claimed that he had been told in a telephonic conversation by the VC that the latter was powerless in this case but offered Ammar a financial settlement for his services.

Talking to Daily Times, Punjab University’s Public Relations Officer (PRO)Khurram also confirmed the offer. He said that Ammar could be compensated for hisservices financially. “We have a way out for that. We could pay him from the self-supporting funds. And the students who he had been supervising will be allotted alternative supervisors”, he said.

Khurram admitted that Ammar had been teaching at PU but was not under contract due to his failure to submit the joining report within due time.

“This was his mistake, a clerical issue, due to which his contract was withdrawn”.

Responding to a question on Ammar’s claim that he’d been asked by the VC to ‘mediate’ between the varsity and Pashtun students when situation got out of hands following violent clashes between Pashtun students and Islami Jamiat Tulaba, Khurram said that Ammar had never been given any such duties officially.

When asked how Ammar could continue teaching for over six months and supervising Bachelors, Masters and PhD students if he hadn’t even joined, Khurram in vague words blamed it on the previous VC. “The new VC joined in January. This issue began in October last year”.

Interestingly, Ammar Ali Jan continued teaching for four months under the new VC as well. Even the letter released today for the press is dated January 4, 2018. It wasn’t brought under Ammar’s knowledge for over four months that a letter had been issued from the Registrar’s office withdrawing his appointment offer.

However, the PRO categorically denied the claims that the reason behind ‘the withdrawal of the appointment offer’ was professor’s political views. He said that Punjab University’s present culture was of complete freedom to the faculty and no one was discriminated against due to their political views.

“We have a huge faculty and there are right-wing teachers as well as the ones leaning to the left, all having different opinions on almost all the issues. PU administration does not interfere in teachers’ private lives or political leanings”.

He added that Ammar was a foreign qualified academic and the varsity held him in high regard. “If Ammar applies again, he will surely be considered for the job”, the spokesperson continued.

But Dr Ammar has different plans. He says he will be taking legal action against the university and will use all platforms including the social media to shame the administration over their ‘baseless claims’.