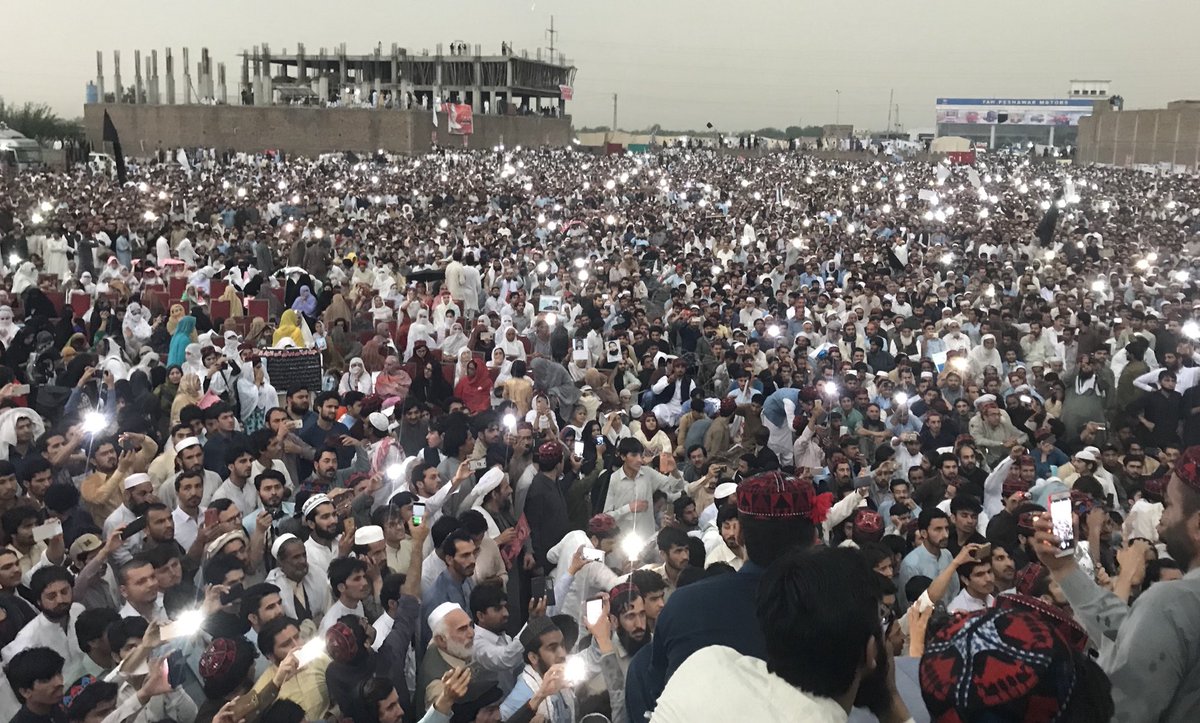 One section of the ground was reserved for missing persons’ banners and photos. Dozens of mothers, sisters and wives participated with placards demanding release of their loved ones. Basro Bibi, wife of one of the missing persons, also spoke to the gathering. She is living with her kids in poor conditions after her husband’s abduction. “My husband was a labourer but the people from law enforcement agencies picked him up. Neither did they release him nor presented him before the court”, she cried.

Movement leader Manzoor Ahmad Pashteen asked the gathering to remain united until getting the constitutional rights. After the arrest of the ‘fake encounter specialist’ Rao Anwar, now PTM’s demand is to bring Ihsan Ullah Ihsan, the former spokesperson the banned Tehreek-e-Taliban Pakistan (TTP), to the court. The actual culprit of the Pashtun genocide is General Pervaiz Musharaf who must be brought back to face the trail, said Pashteen. “There are two sorts of laws in this country: one is for killers and the other is for law followers but now PTM will stand with the deprived and poor people of Pakistan at any cost”, Pashteen said to a charged crowd.

Speakers on the occasion said that the intelligence institutions should stop Pashtun profiling. PTM is a non-violent movement, embedded in the soil and only Pakistanis are leading it, said the speakers. Senator Usman Kakar criticised the role of the establishment, particularly in the Pashtun belt. “Pashtuns should be given equal rights as the people enjoy in Islamabad and Lahore”, Kakar demanded. This huge gathering demands genuine rights which are the true picture of democratic Pakistan, he added. Kakar said that Pakistani nation was unlucky because the policymakers of this country didn’t learn from their own history.

Ali Wazir is an emerging leader from South Waziristan, and has lost 17 persons of his family in this war and military operations. “Those who have killed, kidnapped Pashtuns in any part of Pakistan will be brought to justice” Wazir stated while addressing the rally. During the military operations, our markets, homes were demolished and our belongings were stolen; we need those thieves to be brought under the law, he demanded. “PTM is not against the Pakistani soil; rather we are working for stabilization of this country because we work for constitutional supremacy”, Ali Wazir explained.

Young leader from Miran Shah Mohsin Dawar was a part of Awami National Party (ANP) but he was sacked when he delivered speeches from the stage for Pashtun rights despite the fact that ANP has historically based its politics on Pashtun rights too.

Mohsin Dawar asked for judicial inquiry of missing persons and extra judicial killings. The dark-age tactics must end and constitution must be the only guideline of the country, he said.

Police officials said more than 20,000 persons attended the gathering. Professor Sohail Khan, a teacher, reacted to the huge gathering saying, “It’s the 14th movement in the Pashtun belt. State should listen to the residents of this region and must address their grievances”. If the government works on the demands of PTM, the movement would dissolve, he predicted.