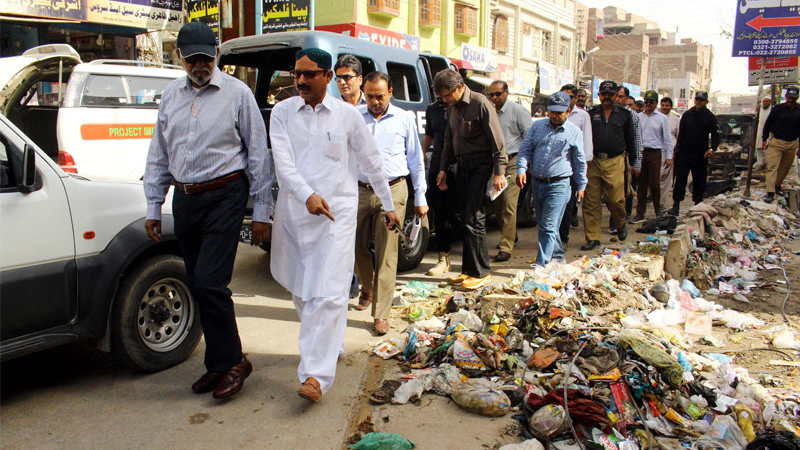 KARACHI: The provincial administration admitted before the Water Commission last week that presence of ‘ghost employees’ – a term used frequently to refer to official posts filled by personnel who don’t show up at work but keep getting paid for it – was among a key reason why the solid waste management authorities in Karachi were unable to lift garbage.

Interviews with civic authorities and a review of documents suggests that after accounting for these approximately 1,300 posts, there were still many more against which hiring had yet to be made. These vacancies were contributing towards a severe shortage of staff, preventing the Sindh Solid Waste Management Board (SSWMB) from adequately discharging its responsibilities.

During the hearing last week, the Water Commission had directed the provincial authorities to undertake efforts, including dismissal of Muslim sanitary workers who don’t show up work, needed to ensure satisfactory disposal of solid waste across the city.

All civic departments concerned submitted their respective reports on the matter with the Water Commission on March 31.

Local Government Secretary Ramzan Awan states that there are more than 5,000 vacancies of sanitary workers in the city and the board had remained unable to fill these positions.

The highest number of vacancies are in Korangi where there are 800 positions against which hiring has yet to be made. It is followed by South and Central districts (700 vacancies), West (650 vacancies), East (400 vacancies), and Malir (300 vacancies).

Among the 1,300 ghost employees are 700 Muslim workers in South, 250 in East and 200 in Central who have reportedly got their cadre changed from sanitary workers to loaders but are still drawing salaries against sanitary worker positions.

No new hirings have been undertaken in the department across six districts of the city since 1992.

Currently, 9,000 sanitary workers lift garbage from the jurisdictions of the six DMCs. In South and East districts, the task has been outsourced to a Chinese company since the last year on a seven-year contract, worth $14.2 million.

Another Chinese company is looking after waste disposal in Malir district since three months.

Tender process for lifting of garbage from Central and Korangi districts has been underway and is expecting to be completed in the next six months.

In addition, 14 different national and provincial institutions look after the task within their jurisdictions, inside the city limits, on their own. These include Pakistan Railways, Karachi Port Trust, Civil Aviation Authority, Port Qasim, Pakistan Steel, SITE Limited, and Sabzi Mandi.

Combined Karachi Municipal Alliance and Municipal Workers Federation president Zulfiqar Shah said that the exact number of ghost employees should be investigated across all districts of the city and a plan prepared to fill vacancies. He dismissed as baseless claims of the Chinese company that workers federation was creating hurdles in the work. He said that the company given the contract of West district had sub-contracted the task to a party that lacked required machinery and manpower.