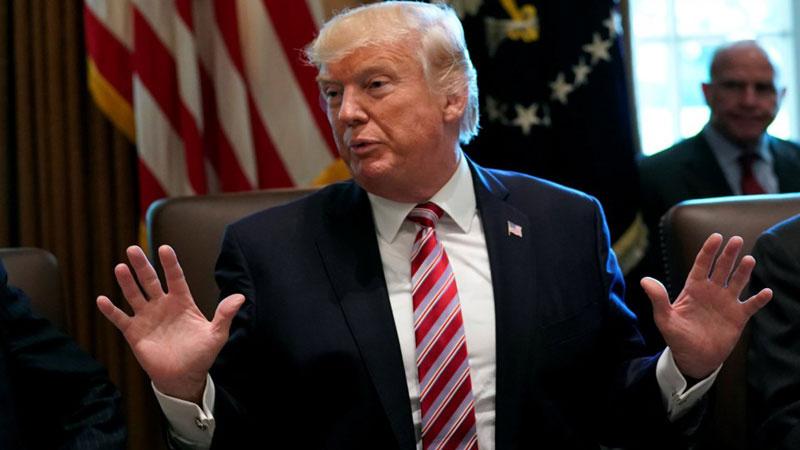 US President Donald Trump has sharply escalated a trade war with China by deciding to impose annual tariffs high enough to effectively block about US$60 billion worth of Chinese products from entering the US. The tariffs are in retaliation for the theft of intellectual property and forced technology transfers by Chinese companies. China exported US$505 billion worth of goods to the US in 2017, while the US exported only US$130 billion in goods to China during the same time period.

That large deficit with China was at the center of Trump’s presidential campaign. But he had so far held off on imposing significant tariffs on Chinese goods because he said he was receiving help from Beijing in curbing North Korea’s nuclear and missile program. With Trump now agreeing to meet with North Korean leader Kim Jung-un, the US president appears to have decided there is little need for restraint on increasing trade pressure on China.

The tariff measure is stoking worries about retaliation from China that could affect US agricultural and technology exports. Trump said the move was meant to persuade the Chinese to cut their US$375 billion trade surplus in goods with the US last year by at least US$100 billion.

But how is that to be achieved? US Trade Representative Robert Lighthizer may be reverting to the playbook he helped devise as deputy USTR in the 1980s when dealing with America’s trade deficit with Japan. He then negotiated “voluntary restraint agreements,” or VRAs, with Tokyo agreeing to limit the export of Japanese cars and other products to the US.

This managed trade policy persuaded Tokyo to support the transplant of Japanese auto and electronics factories and their supplier networks to the US to reduce the trade deficit.

Since VRAs are now largely banned by the World Trade Organization, Lighthizer turned to sanctions under Section 301 of the US Trade Act of 1974 as a new tool to pressure Beijing.

Whether this strategy will work remains an open question. One problem is that China is not an ally of the US like Japan, but a competitor that has strong mercantilist instincts that discourage the relocation of its factories overseas.

Moreover, Trump’s trade policy also involves discouraging Chinese investments in US technology companies to prevent Beijing from acquiring trade secrets. This included the recent blocking of a takeover bid for Qualcomm by Singapore-based chipmaker Broadcom because of the latter’s alleged links to China.

Restrictions on Chinese investments in the US, particularly in strategic industries, are likely to get tighter. Congress is considering widening the scope of the Committee on Foreign Investment in the United States to allow it to scrutinize foreign investments on national security grounds more closely. This would be primarily aimed at Chinese investments or investments by third parties with Chinese interests. The legislation is enjoying bipartisan support among both protectionist and free trade lawmakers.

There is also growing support for reciprocity in demanding the same conditions for Chinese companies to operate in the US as those required for American companies in China. “If Alibaba wanted to invest in the United States, I’m sorry, you need to have an American partner and Alibaba needs to give us their source codes,” said Robert Manning from the Atlantic Council, a Washington-based think tank.

These investment restrictions thus make it unlikely that a “Japanese solution” can be found for the Chinese trade surplus with the US. They also open the Trump trade policy to criticism despite widespread sympathy for the administration’s argument that China is engaging in unfair trade practices.

The tariffs are likely to increase the cost of Chinese electronics and clothing imports amid fears that inflationary pressure in the US is already starting to build due to higher interest rates, a tight labor market and stimulus spending.

The tariffs could also provoke a retaliatory response from China that would harm the US farming sector since China is a major buyer of soybeans and sorghum, and curtail sales of US passenger jets. There are also fears that China might sell some of its US government bond holdings, which would rattle financial markets, increase interest rates and add to inflationary fears.