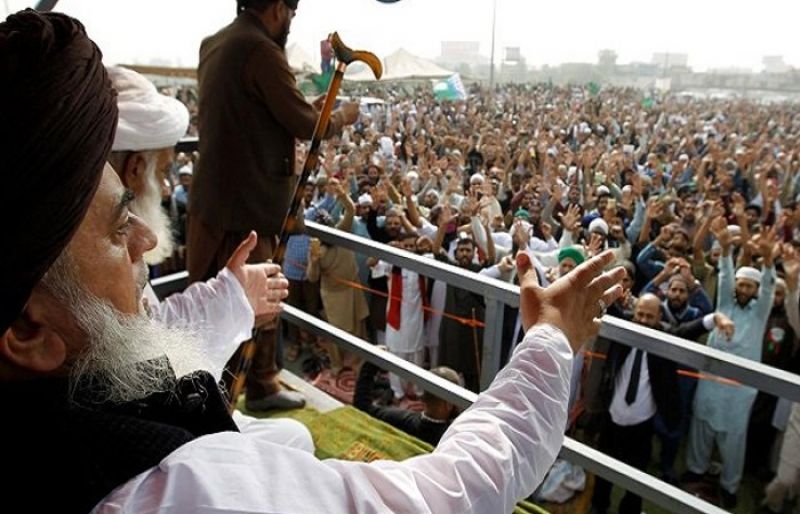 Pakistani media channel 92 News has been alleged of supporting the Faizabad sit-in – which had ended with the resignation of the federal law minister of the country last November – by Pakistan’s Inter-Services Intelligence (ISI) agency. The sit-in had been organised by a religious-political outfit Tehreek-e-Labbayk Ya Rasool Allah (TLYR), led by Maulvi Khadim Hussain Rizvi, who is known for his fiery speeches and strong advocacy of Pakistan’s controversial blasphemy laws.

In October last year, Pakistan’s parliament had passed the Election Reform Bill 2017, which had sparked controversy over a slight change in the provision regarding finality of Prophethood. The opposition lawmakers raised the issue in and outside of the parliament, eventually leading to the religious groups hijacking the matter and TLYR announcing a sit-in in Islamabad.

The protesters demanded resignation of whoever was responsible for the amendment. An operation was launched by the police but it failed to deliver as reinforcements from the Barelvi sect seminaries in and around Islamabad continued to beef up the number of the protesters at Faizabad Interchange. The failure of the operation led to the demands of the protesters being accepted and Law Minister Zahid Hamid tendered his resignation after an agreement facilitated by Pakistan military.

A report submitted by ISI to the Supreme Court says that the protesters had raised the funds for the sit-in through various quarters, some of them being opposition leader Sheikh Rasheed, the Ulema wing of cricketer-turned-politician Imran Khan’s Pakistan Tehreek-e-Insaf (Movement for Justice), former dictator General Zia ul-Haque’s son Ejaz ul-Haque and Sheikh Hameed of slain Benazir Bhutto’s Pakistan People’s Party (PPP).

However, the most problematic bit of the report is that there is an owner of a media house found involved in the funding of the sit-in. 92 News is a Lahore-based channel and ISI reports that the owner of the channel, Mian Abdul Rasheed, had been providing food to the sit-in protesters.

The channel is known for its extremist leanings towards the Barelvi sect, also the one professed by the sit-in protest leaders. One of its anchors, Nazir Ahmad Ghazi, a retired judge of Lahore High Court, did multiple programs in favour of Mumtaz Qadri, the murdered of former Punjab governor Salmaan Taseer, after he was executed on the orders of Supreme Court in 2016.

The office of Pakistan Electronic Media Regulatory Authority’s (PEMRA) complaints cell saw ruckus as the retired judge was called to explain his position on the shows. He came to the PEMRA’s Lahore office along with ‘100 or so people’, mostly lawyers, raising religious slogans.

There was another complaint being heard against renowned columnist Orya Maqbool Jan – also named by ISI in its report as a supporter of the protesters – on the same day. Jan had been accused of inciting violence against the persecuted Ahmadi community of Pakistan. However, none of the cases could be heard that day since the PEMRA Council of Complaints Lahore chairman Dr Mehdi Hasan failed to control the group of lawyers, who had somehow broken into the building.

“When I asked how they had entered the building, the former judge replied that he had ordered opening the door for them. I asked him if he could have heard a case under such a situation. He fell silent”, Dr Mehdi Hasan told this scribe later during a lecture at Punjab University.

The lawyers there went on to demand that the complaints should only be heard by ‘someone who has faith in the Day of Judgment and afterlife’, a veiled attack at Dr Mehdi Hasan whose leftist politics and ideals are common knowledge since Zulfikar Ali Bhutto’s regime.

The channel continued to air such programs later as well. Recently, it led a smearing campaign against former Prime Minister Nawaz Sharif’s daughter Maryam Nawaz, alleging her of committing ‘blasphemy’ during a recent public meeting. The anchor of the TV show alleged that Maryam was apparently trying to compare herself with Prophet’s daughter. Analyst Babar Awan, who also happens to be a PTI leader, remarked in response that even metaphorical comparison to such revered personalities was blasphemous according to Pakistani law.

A media house’s open support and practical help to an extremist religious outfit over blasphemy issue has never been documented in the country’s history before. The ruling party has been at the receiving end of slurs and physical attacks by the TYLR supporters lately. Former PM Nawaz Sharif was also attacked with a shoe at a seminary in Lahore last week. Analysts believe that the coming election due this summer could turn out to be the most violent elections in the country’s history.