Slavery is not history

There are no easy answers as to what can be done to rehabilitate a victim of human trafficking. Educating ourselves and standing up for their rights is the first step.

In the modern world, there are more slaves than there were in any period of the history.

Modern day slavery constitutes human trafficking. The victims are coerced or fraudulently compelled into forced labour or are exploited for sex. The victims are mostly from underprivileged backgrounds, and are enticed to partake in journeys to a more affluent neighbourhood or country under the guise of being offered a respectable job at a beauty salon or a waitressing job for a certain sum of money. If  the victim can’t arrange, he is  a loan by the person or the company sponsoring them on a compassionate basis.

Once the victim’s plane lands in the promised destination, the person is forcefully taken to a brothel and is sold as a slave to satisfy the hunger of ‘beasts’ who partake in such heinous atrocities.

The victim  is threatened with abuse and physical violence and is forced to comply with them.

There’s, unfortunately, no place on earth where people are not trafficked, and it involves men, women and children. Human trafficking generally involves two categories: Trafficked for sex and trafficked for labour.

Though sex trafficking tends to garner more media coverage due to its sensational nature, trafficking for labour is comparatively more common. Victims trafficked for labour are made to work non-stop in primitive conditions; without any food, water or proper sanitary conditions. 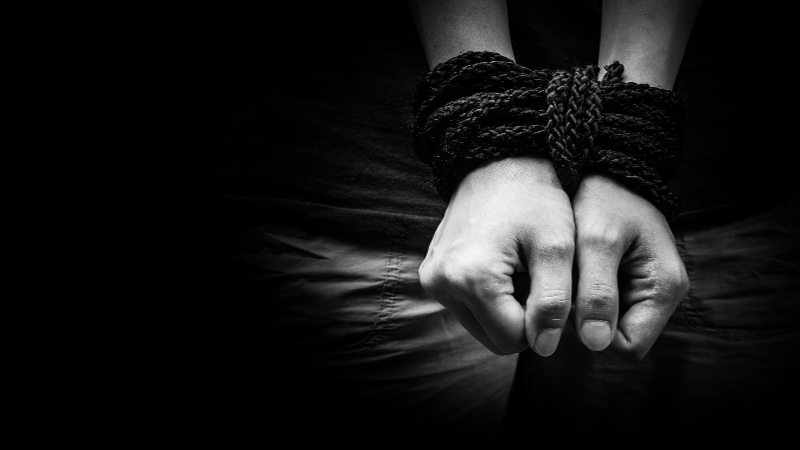 For those who are trafficked for sex are forced into prostitution. They are ravaged by dozens of men,  and are physically and emotionally tortured into performing other lurid acts.

All exists because there are ‘beasts’ out there willing to pay and satisfy their desires with such horrendous crimes.

Women sex slaves are at higher risk of  contracting deadly diseases. They are also  further violated by their pimps on a recurring basis.

Human traffickers use force, fraud and coercion to do their dirty job.  Force refers to how traffickers gather their victims, as well as how they maintain control over them. Fraud is when they entice their victims with bounties beyond imagination if they were to make the move to some other affluent country or place, but rather than taking them to the promised workplace, they are sold in the sex industry or bondage labour.

Lastly, coercion is a powerful tactic in keeping trafficking victims enslaved. Not only do they threaten the trafficked victims but they threaten their beloved ones with reprisals beyond the limits of human nature. In many societies, the loss of virginity on a woman’s part is considered to bring shame to her family’s name. Even if the woman manages to free herself from her captors, her return to her family is a suicide itself. Many cultures do not tolerate woman who have lost their virginity, and rather they prefer death for them.

Coercion is a powerful tactic in keeping trafficking victims enslaved. Not only do they threaten the trafficked victims but they threaten their beloved ones with reprisals beyond the limits of human nature

Whenever we see some young girl at traffic signals or a bunch of labourers working continuously, you never know that they might be the victims of trafficking and being coerced into performing the acts by their captors.

A vexed question we might occur to us is: ‘how to put an end to human trafficking and what can be done about it?’

There’s no certain answer to the predicament, though the United Nations emphasizes prevention, prosecution and protection.

It is something that is frowned upon as it perpetuates the idea that a life can be bought and sold, and furthermore, previous attempts have proven to be unsuccessful. Either the freed slaves lack the resources to be able to live their new found lives, and return to their previous captors or they are way too traumatised to be able to live without some authority that dictates  their lives.

There are no easy answers as to what can be done to rehabilitate a victim of human trafficking. Educating ourselves and standing up for their rights is the first step. Stronger laws which are in favour of the victims of such crimes and stricter punishments for the traffickers are something that should happen on a certain basis. That there truly is no definite answer for it, is frustrating in itself.