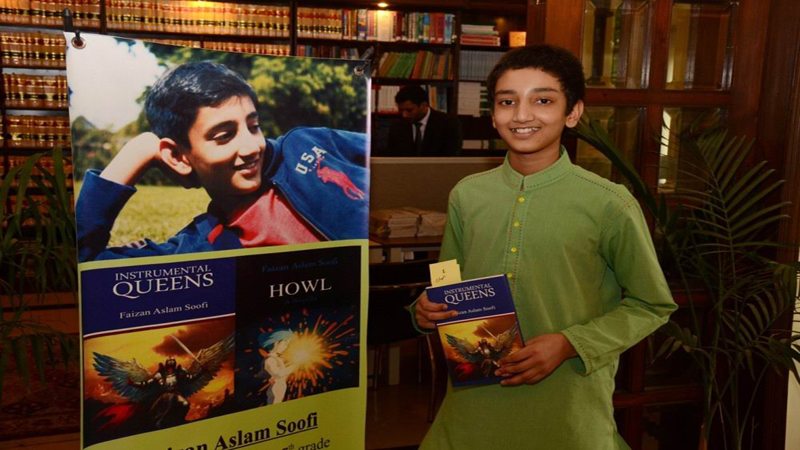 Haruki Murakami, a renowned Japanese author, once said, “If you’re young and talented, it’s like you have wings”. It seems that 14-year-old Faizan Aslam Soofi, one of the world’s youngest published authors and Pakistan’s youngest published fiction writer, is soaring towards the sky with his critically acclaimed books. He has published 4 books including two short stories and two of the three books in The Quotus Instruments fantasy trilogy named Instrumental Queens and Instrumental Kings respectively and is currently working on the third book of the series called Instrumental Gods.

The first book, Instrumental Queens, follows the story of two sisters, Clary and Lily, who accidentally fall into an alternate universe called Downworld. Upon meeting the God of Sun called Ra, they discover that the fate of Downworld rests upon their shoulder. They must save the kingdom Ravannah from demons or let the kingdom be destroyed. Other than the two sisters, the story also has side characters which are essential to the plot. The second book, Instrumental Kings, introduced new characters Newt and Linton and their purpose to extinguish demons from the Downworld. The characters from the first book also return in the second one and play a key role in the story.

The first book was more detailed and well written as compared to the second book. The first books focus more on the characters, however, the second book is more concerned with the plot of the story. The books are exceptionally written by someone this young. The best thing about the fantasy books is the world that is laid in front of us leaving it up to the reader to interpret it as he likes. I was all excited to read what this young person had to say. To get lost in and conjure up whatever world he had created. As we all know, only with practice we become better and better. If the writer continues writing books and stays in this field, he has the potential to become an exceptional writer.

When I was suggested to read these books, my first question was, “who is the author?” To say that I was surprised upon finding out the age of the author would be an understatement. As a reader, I felt ashamed that I never knew that this author existed who has achieved so much at an early stage of his life

I would recommend this series to anyone who reads the fantasy genre and is fascinated by magical places full of demons, vampires, ghosts, gods, instrumentals and devices. While reading the books, I saw an essence of Young Adult fantasy books I’ve read like The Mortal Instruments, The Maze runner and it seems like the author was inspired by these series.

When I was suggested to read these books, my first question was, “who is the author?” To say that I was surprised upon finding out the age of the author would be an understatement. As a reader, I felt ashamed that I never knew that this author existed who has achieved so much at an early stage of his life. But I also felt proud that this person was doing what he loved. He has set the bar up high for the youth and for me as well. His books are not only available in Pakistan but in international libraries including Harvard University, Colombo University and the Library of US Congress. His work should be appreciated and applauded by everyone in Pakistan for he has achieved more than any other adult.

He just proves that there are no limits when it comes to the talent in youth and one should also not make the excuses of young age. If he can do it then so can everyone. He should be an inspiration to the kids and young adults to follow their dreams and make the most of their talent. This also shows that there should be availability of platforms to hone the skills of the youth of our country and to promote them. All the youth needs is a little push to the right direction. I look forward to his upcoming projects and wish him all the best for his future.