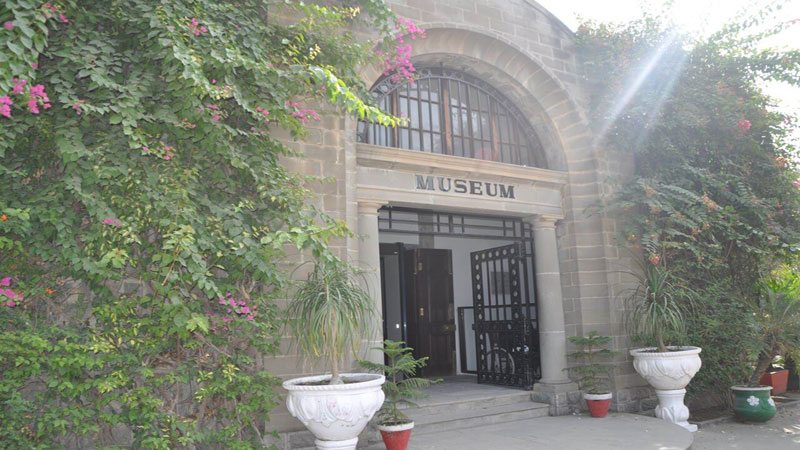 It was a dusty and smoggy morning when we were on our way to Taxila. We did not have air masks to protect us from lungs infections. Both India and Pakistan are facing the issue of smog which is caused by coal burning and de-forestation. It is need of the hour that both countries join hands against massive air pollution. The dust in the air made it difficult for us to see the beautiful landscape of Pothohar.

After a 20 minute drive from Islamabad, we stayed at a site where original Grand Trunk road still exists.

The original section of this GT Road has been constructed with rock stones and it is in remarkably good condition. The government has done an outstanding job of maintaining it.The GT Road was built from Kabul to Dhaka by Sher Shah Suri during his reign from 1539 to 1545AD. Later we reached the Taxila Museum

The land has seen three great kings, Alexander the Great, Chander Gupta Maurya and his grandson Asoka The Great. It is a land where Vedas were written, Buddism thrived and spread over to Japan, Ceylon, China and many more areas. Influence of Buddism was so profound that invaders themselves converted to Buddism. The History of this region is an integral part of Indian civilisation popularly known as Indus Civilisation.

On way to Doberan Kallan, we were told that there is a school that produced many girl athletes so we decided to encourage young pupils by visiting the school. Its name is Unique School and Karate Academy and it is situated in Shah Bagh Tehsil Kallar Syedan. A visit to this particular school was very interesting. This ordinary looking school has produced 5 female state and national karate champions. Principal Pervaiz Iqbal was very proud to show us the medals these extremely talented girls had won. He hurriedly called for an assembly and we were asked to address the students. The school was on par with any top school globally and after interacting with the students, one feels Pakistan is wrongly seen through a blurred lens by the rest of the world. Pakistan has success stories too, which are kept hidden from the foreigners.

After this we where at Kallar Syedan road, off-shoot of which connects to Doberan Kallan. We were guided by a young local named Ghulam Abbas Kiyani who first took us to Sikh Gurudwara which is in a dilapidated condition but its compound still has several citrus fruit trees. We asked him to take us to a well which was built by Sikhs before the partition. We walked through the main bazaar and narrow lanes arriving at this dysfunctional well. We were met with a plaque in Gurmukhi, giving the name of the person who built this well for others in memory of his late wife. We also saw a disused swimming pool where ladies bathe it is also used for washing clothes. It is built on top of a magnificent structure, but is in a poor state. We came to the conclusion that the local legislators should bring it to its original state and use it as a swimming pool for everyone to enjoy. With a little love and care, this priceless site has the potential to bring endless joy for the people of Pakistan and the foreign visitors.

Later we went to Bewal to trace the ancestral house of Dr Harpreet Singh Chadha and the only thing we knew was that it was next to Wali Ahmad’s home. Our local guide used his resources to phone a few people in Bewal and later we arrived at the descendant of Wali Ahmad’s house. We were greeted with garlands and served local delicacy Amrassa. Bashir Ahmed, aged 76, and another colleague allowed us inside the Bewal of pre-1947. We were told that both Bewal and Doberan bore the brunt of anti-Hindu and Sikh riots. 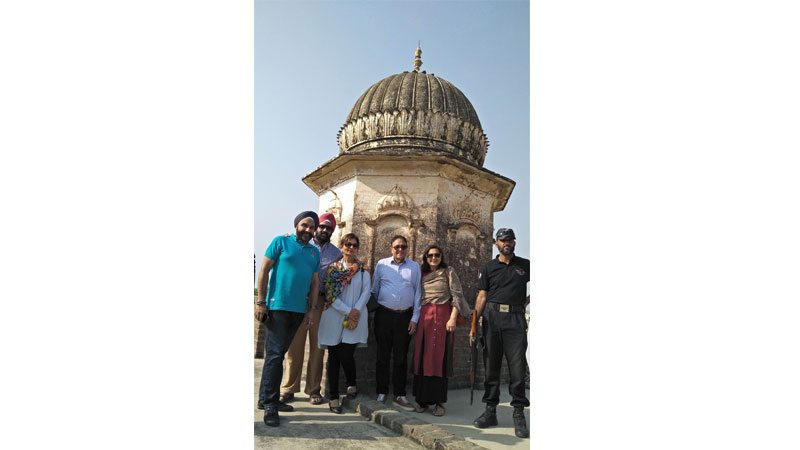 We managed to see the old house of Harpreet Chadha and it was quite an emotional scene to be included in.

The old Gurudwara is now a big residential place and the owner obliged our request to view the inside.

Another place we visited is Nankana Sahib. It is the birthplace of Sikh faith founder Guru Nanak Dev Ji. There are six historical Gurudwaras within the vicinity of Nankana Sahib. The land of Nankana Sahib is approximately 18,750 acres and it was given to Baba Nanak by Rai Bular aka Rai Bhoe Chief of ‘Rai Bhoe Di Talwandi ‘. Our tour was arranged by his descendant Rai Asif Bhatti of Guru Nanak Foundation UK. During Maharaja Ranjit Singh’s time, the family was recognised for the generosity of their family, a title of Rai Bahadur was bestowed upon Rai Issa Khan. The present building was built by Maharaja Ranjit Singh in 1819-20. Next, to Gurudwara, there is an old tree where Bhai Lakshman Singh was hung upside down and burnt to death alive. This happened when Sikhs tried to take control of this Gurudwara from Mahant Narain Dass. It is believed a contingent of 250 peaceful and unarmed Sikhs were brutally shot down. This is a powerful and painful reminder of the sacrifices made by Sikhs during Gurudwara agitation. The peaceful agitation was to get control of historical Gurudwaras from the clutches of arrogant and merciless Mahants.

The tomb of Sheikh Farid is located in Pak Pattan. His Sufi hymns are included in Sikh scripture Shri Guru Granth Sahib. In his poetry he laments the separation from his beloved God and mediates on his name as illustrated in following two lines.

No Sikh pilgrimage could be completed without visiting his shrine. On our arrival, we were greeted by DSP and his staff. We were given the VIP treatment and were taken directly to his Mazar (tomb) Women folks were asked to stay

at the door and men were allowed to go inside. We asked if we could do our Sikh Ardas inside the tomb and DSP allowed us. Inside, there are were two tombs, one of Baba Farid and the second one of his eldest son. There is another entrance from the front through a silver gate which only opens once in a year. It is said that if you pass under this door you are sure to go to heaven. We bid farewell to our host and headed to Kasur to pay our homage to Bulleh Shah. It is clear to all that the entire place is well kept and run in an orderly fashion.

Bulleh Shah (1680-1757) was the greatest port of his time. He believed in the oneness of God and loved all. It said that sometimes he used to dress up like a dancer and dance in praise of Almighty. In the courtyard of this mausoleum, Qwalls were singing qawwalis. We sat there for few minutes and enjoyed the mystic music. All Qawwalis are sung in praise of God. Bulleh Shah is buried here. Sacha Sauda Gurudwara is situated in Farooqabad. This is a beautiful Gurudwara with enormous land with a garden containing a variety of flowers, trees and holy Sarovar (large swimming pool). There were exotic birds like peacocks in the complex, seeing these majestic animals made the Gurudwara even more compelling. It truly is one of the most beautiful Gurudwaras I have ever visited. 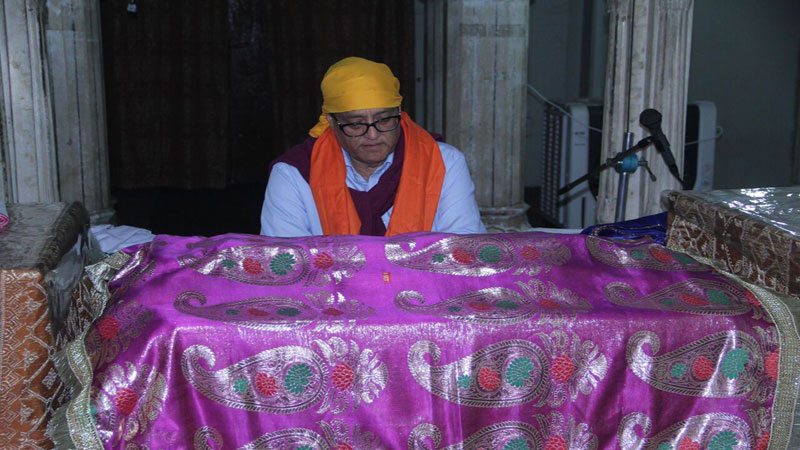 Rori Sahib Gurdwara – Eminabad: This beautiful Gurudwara has a magnificent entrance like a fort with three domes made of beautiful red bricks. The architecture is awe-inspiring.This is the location where Guru Nanak mediated before he was imprisoned by the Mughal emperor. The complex has got a guava orchard and a Sarovar which needs to be preserved. We all felt it must be brought to its original glory. In the vicinity, we also saw Gurudwara Chakki Sahib where Guru ji was kept in captivity. We viewed the residence of Bhai Lalo, Guru Ji preferred to dine with him over the with rich man Malak Bhago. Both these places are being planned for restoration and I hope to be back when the work is completed. Continued..