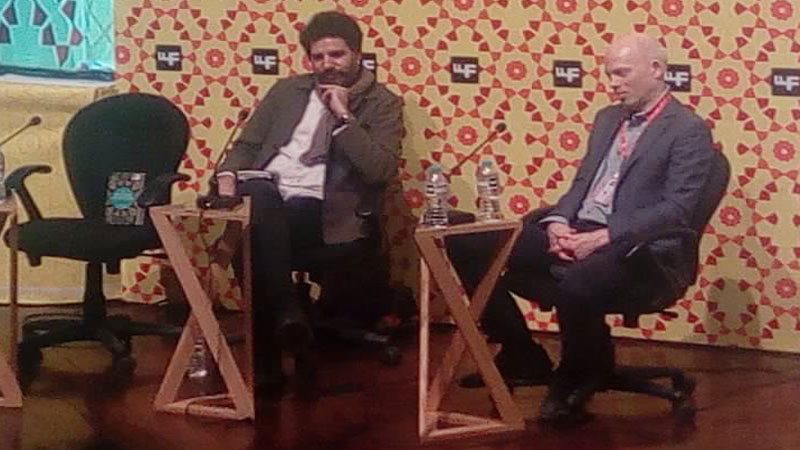 A session discussing Christopher de Bellaigue’s book Islamic Enlightenment: modern struggle between faith and reason was held on the second day of the Lahore Literary Festival (LLF) on Sunday with the author – an accomplished journalist who has covered the Middle East, Turkey and South Asia since 1994.

Other speakers included Iraqi journalist and recipient of 2014 Orwell Prize for Journalism, Ghaith Abdul-Ahad and American journalist Robert F. Worth. The panellists held a stimulating discussion on the history of the Islamic world, the violent extremism plaguing it today and the Arab Spring.

Abdul-Ahad and Worth began by telling the audience how they had met each other in 2003, when journalists from around the world were heading to Iraq in droves to cover the American invasion of the country. This – they said, was the beginning of the end for the Middle East as the world knew it back then. Worth stressed that the biggest mistake the US had made in its invasion of Iraq was to completely dismantle the Iraqi military. This, he said resulted in thousands of men whose only skills were military related being left unemployed and full of resentment. According to Worth, it was these men who went on to form what later became known as the Islamic State of Iraq and Syria (ISIS). He went on to say that he had an interest in alternate history and couldn’t help but wonder if the US could have done a better job in Iraq, and how the Middle East would be different today if it had.

An audience member chided Worth, and stated that there is no ‘better or worse’ when a foreign power invades and tinkers with another country’s system of governance. The audience member stated that if one is speaking truthfully, such a violation can only be called colonialism.

Speaking on the Arab Spring, Abdul Ahad said that the movement was permeated by religious forces because the regimes in the Middle East had allowed no platform for social movement which was not religious.

He was of the opinion that this, in combination with sectarian fault lines that had already existed, is a major factor in sectarianism that has arisen in the Arab world in recent years. He further stated that the role of Saudi Arabia in export of Wahabiism across the Muslim world using its oil wealth cannot be ignored either.

As the discussion drew to a close, Abdul-Ahad said that Muslims today must not feel like they have to justify their faith because of the narrative surrounding terrorism and the wars in the Middle East. However, he went on to say that the global Muslim community must look forward instead of remaining obsessed with a glorified past, and imposing a vision of that past on everyone else. When an audience member asked Abdul-Ahad how the Muslim world can modernise while remaining faithful to its historical culture, Abdul-Ahad advised him to read Bellaigue’s book.

Meanwhile, the session on Lebanese author Hanan al Shaykh’s novel Women of Myrrh, Women of Sand – originally published in 1989, had the author herself as well as renowned short story author Aamer Hussein as speakers.

To begin the session, Shaykh gave a detailed description of the subject matter of Women of Myrrh, Women of Sand. The novel’s storyline consists of four female characters. Different sections of the book are from the perspective of each of these female protagonists. She said the story of her mother – who was married at the age of 14 and had conceived both of her children by the time she was 17 – and was completely illiterate despite the fact that her father was a school teacher – inspired her to write stories that would compel patriarchal Arab societies to change their views on women and the role they can play in society. She elaborated that her own upbringing had also made her want to rebel against pre-defined gender roles through her writing.

When asked if she considers herself a feminist, she said that while she did not like labels, her work certainly did involve feminism. She added however, that she had left Lebanon in the 1970s to escape the civil war there and did not consider Lebanon her home anymore.

Further commenting on her decision to leave Lebanon, she explained that during the civil war, one of her children was only five-months-old and the other one was two. She said that every time she had to leave the house to buy milk for her children, she risked getting shot by snipers – and that this was a very stressful experience for her. She explained how the civil war divided Lebanon by religion and sect, and that she was disturbed about being asked what her faith was by shopkeepers before they agreed to sell her anything. “This is what finally compelled me to leave my country. I could not tolerate being asked such invasive and unnecessary questions.”

She shared how eventually she and her husband moved to Saudi Arabia because her husband had found a job there. Shaykh said that as soon as she stepped out of the airplane and saw women covered head to toe in black Abayas, she knew that Saudi Arabia would have a story to offer. She gave an account of an associate who ran a hairdressing salon in the country during the 1980’s despite being harassed by the Saudi religious police, and how repressive Saudi Arabia was for women during this period.

Shaykh said her novels were a way for her to avenge Saudi Arabia’s repression of women, and that this was the reason so many of her novels are banned in Gulf countries.