‘Muslim Zion’ — a different perspective on the origin of Pakistan

The author tackles the concept of Pakistani identity head on 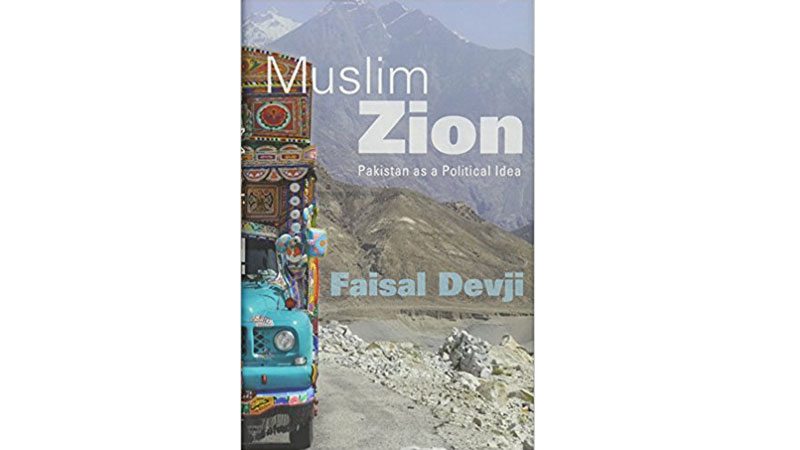 While many scholars have noted parenthetically that Pakistan and Israel are the only two countries that were created on the basis of religion, they have not devoted an entire book to expounding that thesis.

That challenge has been taken up by Faisal Devji. His book, Muslim Zion, published by the Harvard University Press, has garnered favorable reviews from Christophe Jaffrelot and Anatol Lieven.

Devji says it is his task “to describe the religious state not only as a modern political form, whose international dispersal prevents it from becoming a regional exception, but also as one that challenges nationalism itself, if only by questioning its attachment to the territory that makes a common history and culture possible.”

He explains why Choudhry Khaliquzzaman was rebuffed at the 1938 Palestinian conference in Cairo when he presented the early conception of Muslim identity in British India which would later coalesce into a demand for Pakistan. Devji says the Palestinians saw some eerie parallels with the Zionist conception of ‘minority nationalism’.

Devji tackles the concept of Pakistani identity head on. He cites General Zia’s 1981 interview with The Economist. Zia, who ruled Pakistan longer than anyone else, said bluntly: “Pakistan is like Israel, an ideological state. Take out the Judaism out of Israel and it will fall like a house of cards. Take religion out of Pakistan and make it a secular state; it would collapse.” And then Devji proceeds to take a deep dive into Jinnah and Iqbal’s views. That is where the book makes a contribution to the literature.

Devji alludes in passing that many of Pakistan’s problems are due to an excess of religion in the body-politic, and the consequences have been akin to a person having too much sugar in his blood. That is indeed true. But he does not explain why there is so much religious sugar in the blood that Valentine’s Day is banned and people can be lynched if they are presumed to have committed blasphemy

In a foreword to a 1943 book, Pakistan and Muslim India, Jinnah said that the 90 million Muslims of India were comparable to the Jews who are scattered all over the world. Devji also says that some of Iqbal’s poetry came so close to expressing Zionist sentiments that it could easily have been mistaken for endorsing Zionism.

Jinnah thought the Muslim intelligentsia was selfish, intellectually corrupt, and lacked character. Unsurprisingly, “Jinnah had few Muslim friends and his views of the community he sought to lead indicated a notion of representation that was not premised upon his identification with them.”

Devji says that Jinnah’s two nation theory was afflicted with a giant contradiction: “In the same breath that he proclaimed India’s Muslims to be a nation after 1937, Jinnah could also bemoan their lack of such an identity and counsel them to achieve it by copying the Hindus.”

This allowed Jinnah to simultaneously caution the Muslims left behind in India that they would remain a sub-nationality, while telling the Hindus, Christians and Muslims in Pakistan that they would become one nationality.

Thus, Jinnah accomplished “not simply the partition of India, but that of its Muslims also,” since it destroyed their demographic weight in the subcontinent. Devji says that given the Quaid’s ambiguous character, we are unable to tell if this is what Jinnah wanted by design or if this was a catastrophic outcome that he had failed to anticipate.

Jinnah was also apprehensive of sub-nationalities arising in Pakistan because of its multiple ethnicities. He told a mammoth rally in Dacca in 1948 that the new nation would have to repudiate not simply its colonial and more generally Indian past, but even the regional identities of its own Muslim majority.

He compared those identities to nations in waiting. Devji says, “It was as if Jinnah’s own ‘two-nation theory’ had returned to haunt Pakistan with the spectre of more partitions to come.” Jinnah’s fears were realised when East Pakistan broke away in 1971. Imposing Urdu as the national language on the Bengalis proved to be a poor instrument for promoting political unity.

The book shatters more than a myth about Pakistan’s founder. Jinnah, in a 1938 speech in Patna, said: “I say the Muslim League is not going to be an ally of any one, but would be an ally of even the devil if need be in the interest of Muslims.” On hearing that comment, a pin-drop silence descended upon the House.

Jinnah’s reference to the devil was not uniquely his. In an essay published in 1909, Iqbal had said, “I hope I shall not be offending the reader when I say that I have a certain … admiration for the devil. By refusing to prostrate himself before Adam…he revealed a high sense of self-respect…which, in my opinion, ought to redeem him from his spiritual deformity.”

In Jibreel-o-Iblis, Iqbal describes Satan as a heroic figure. In the poem, there is a dialogue between Gabriel and Satan in which Satan says that it was his blood that gave colour to the story of Adam, and adds: “I prick into the deity’s heart like a thorn/All you can do is sing hosannas to his name.” Elsewhere, in Javid Namah, he says that ultimately man will recognise “his own divinity and [realise that] God came to exist through him rather than the reverse.”

Iqbal had a deep distrust of the nation state and that led to him have a “most ambiguous attitude toward ideas such as a Muslim State. Though he died a couple of years before the Muslim League adopted Pakistan as its goal…Iqbal seems ultimately to have rejected it.”

Back in 1933, he had clearly repudiated Pakistan in a letter written to Edward Thompson of Oxford University: “Pakistan is not my scheme. The one that I suggested in my address is the creation of a Muslim province in the northwest of India. This will be a part of the proposed Indian Federation.”

This statement stands in direct contrast to the widely held view of Iqbal in Pakistan where he is regarded as the poet-philosopher behind the concept of Pakistan.

The book sheds a new perspective on the origins of Pakistan. But the comparisons with Israel may not convince all readers. Israel is not a theologically Zionist state but an ethnically Jewish state. Also, it is located on land considered holy by Jews.

Devji alludes in passing that many of Pakistan’s problems are due to an excess of religion in the body-politic, and the consequences have been akin to a person having too much sugar in his blood. That is indeed true. But he does not explain why there is so much religious sugar in the blood that Valentine’s Day is banned and people can be lynched if they are presumed to have committed blasphemy.

The book can be turgid reading at times, with long sentences, clauses and sub-clauses. One sentence runs into nine lines. It is no page turner like some of the other writings on the partition of India. Yet no serious student of Pakistan can afford to neglect it. It contains a wealth of analysis drawn from an exhaustive and imaginative reinterpretation of the literature on the origins of the country.

The writer has authored “Rethinking the National Security of Pakistan” and can be reached at Ahmadfaruqui@gmail.com