One cannot but admire and be heartily thankful for the immense liberty of expression and vast readership provided by the social media, particularly to those who are suffering from state, corporate, clerical, sectarian or simply social or dogmatic oppression.

It undertook the fights for causes that traditional media either failed or shied away from picking up. It championed the lost causes; which was brave and commendable. However, there is an ugly side to its shining armour which we will discuss subsequently.

Irresponsible guests and voracious social media have quite a few commonalities. Both are outsiders, they bite into your hospitality and unfairly exploit their privilege of having been welcomed into your privacy. They excel each other in irresponsibility and impinge freely upon the limits of an honoured guest to absorb and not expose the proceedings inside the space they were hosted in. In a while, we will see how the two together have ravaged families, embittered relationships and ripped open the thick curtains of decency that shielded a home from the prying eyes of the bazaar. They have acted rather like the ‘peeping Toms’ than the privileged guests, disregarding the ill effects of their cavalier indiscretions and caring two hoots for the consequences.

The comparison between the guest and social might seem to bit strange but the two certainly have come to signify the latest malice of our times.

We need to understand that social media is basically a preying prowler which makes no differentiation between inside of a house and the Mall Road, a circus, an accident or a rally. It is up to the user and more to his quality of social values and responsibility how he uses this superfast communication tool. Media, you would agree, in our country as a rule is gullible, sensational and has little reflective or introspective ability. Its younger cousin, born out of a not so licit a liaison between the internet and the freelance citizen journalist is blandly rash and intrusive bordering on being outrightly obnoxious. 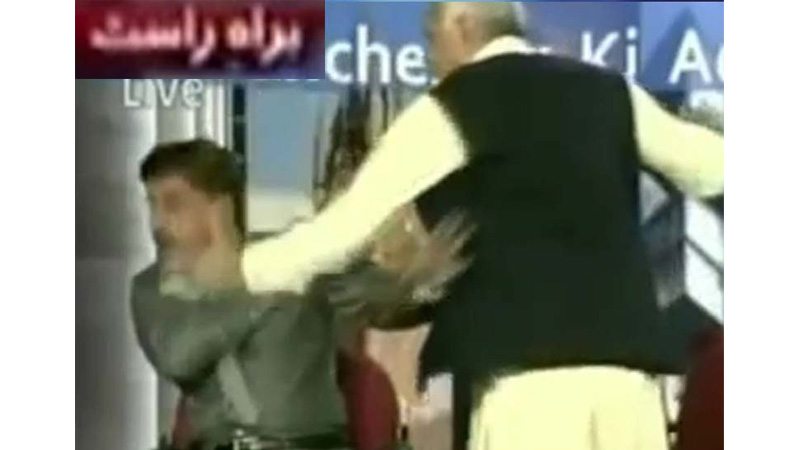 Because of a wide open field and absence of a strong regulating restrictions on content, manufacturing, manipulating or even shading of the text and pictures, baser users are having a rollicking time throwing prestige and respect of anybody to the winds with ease as perfect as a click of the ‘Send’ icon on their smart phone. There is absolutely no institutionalised obligation to ensure accuracy of the news, correct sequence of presentation or context upon the originator, resultantly the object under focus or scrutiny is completely at a loss to respond or rebut to either rectify the falsehood or remove the text from the air waves. There is no central authority whom one can approach to clear the decks or for censure.

It is clear that this powerful and excellent instrument for opinion shaping is being misused by irresponsible characters more than the knowledgeable ones. Self-correction, balance, ethical and reasonably decent reporting seem to have been discarded in favour of sensational and scandalous which proliferates with a lightning speed around the globe with the help of largely the smart phones. Cell phone companies have willingly conspired or acquiesced in this electronic criminality merely for commercial profit, and are part of the outrage regardless of the content being uploaded.

Cell phone companies have willingly conspired or acquiesced in this electronic criminality merely for commercial profit, and are part of the outrage regardless of the content being uploaded

For a recipient there is no way to authenticate or examine the veracity of the content being beamed into your cell phone. For most there is no proprietorship of the texted message and no way of telling who initiated it. These texts seem to hang around for eternity as there is no date of their possible expiry or of the accident of their birth except a time of the day it was sent to you. There is no way of getting back to the author except to float the response in the same endless space and hope it might reach the author. To further hope that he or she would reconsider the hurtful text or breach of privacy is quite futile and to expect a counter response is a very long shot.

One is therefore compelled to assume that more than anything else the way one behaves on social media is a direct and truer reflection of character and social value system of the family and the society the author belongs to. A lot is also attributable to one’s grooming, education and sense of propriety. This media is one of the rare human activities where no universal rules of business and conduct have been devised. The conscious world is slowly becoming aware of its the immense outreach and a corresponding ability to impact human relations and is gearing up to think of some regulating measures. Plenty of damage would have been done by then.

In Pakistan, like elsewhere, we see a flood of texts and snaps uploaded in their millions over the social media good part of which is insufferable, obscene and tainted. Everyone seems to be free to upload anything and in any manner it likes about anything and anybody under the sun. More damaging are doctored images and misquoted texts in a non attributable manner and without identity of the author. This leaves the affected person quite helpless and without a fair chance to defend itself or post a response to the same audience.

Since the parameters of privacy have begun to be relaxed a bit in our private functions presuming that guests and media are sufficiently responsible, our audio- video underworld has become full of indecent and at time criminal exposure of purely family functions, particularly of the family girls traditionally adding innocent fun and frolic to occasions like weddings, Mehndi, birthdays and the like. They flaunt these videos as proof of ‘moral corruption’ in well to do circles. These neo-voyeurs have gone a step further which is even more dangerous. They have started to attack the very basis of our established family hierarchy. In that they particularly target seniors, capture and circulate their unguarded moments to show how ‘morally degenerate’ have the moneyed class become where elderly gyrate among young ones, some with long flowing beards. They purposely omit to add any commentary or any introductory explanation as to what the function was and how the elder joined in to show his affection for the young one whose wedding or similar occasion that might have been.

My suspicion is that this is being done due to various reasons. First, to scandalise the inner society’s privacy to prove oneself to be some kind of a masterful insider. Two, to avenge one’s own deprivation and three, to spread a general disaffection from those privileged. Whatever may be their evil motivation one thing is clear that our traditional family privacy is endangered and exposed. There is a need to exclude professional video makers from family functions and disallow smart phone movie making by guests through an appeal to their good sense printed appropriately on the invitation cards. There is also an equally urgent need to review the way we celebrate these occasions.

As a first step we must make a clear distinction between what part of the function is public and what is strictly for family and then arrange it accordingly. Young ones particularly female relatives and friends’ fun and songs during weddings and Mehndi ceremonies should be considered a strictly family affair. It is a sacred trust placed in the hosts. Sensible discretion is the better part of social valour. We must exercise discretion and care for our privacy ourselves first. There is no way an outsider can ask you to uncover yourself and your family’s grace to the public gaze or prowling social media if one stands guard on one’s dignity. Fun and dignity are compatible, it only requires elegance and sensibility to mix the two.