Tribesmen vow to continue sit-in until Rao Anwar is arrested 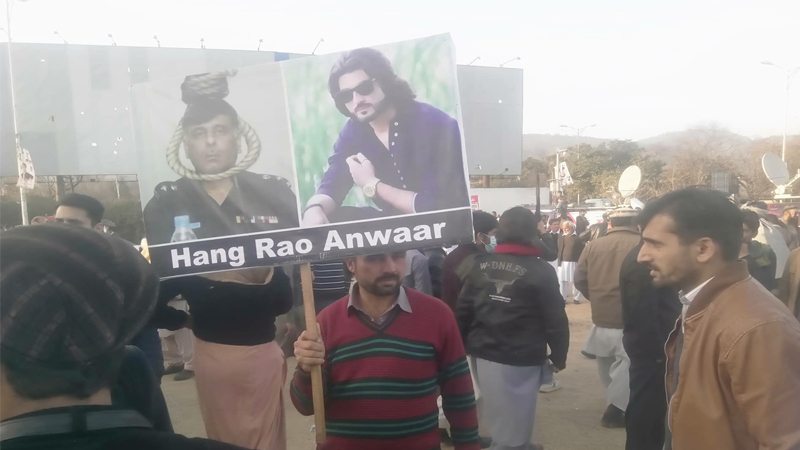 ISLAMABAD: Thousands of tribal people gathered in the federal capital on Thursday, vowing to continue their sit-in till the arrest of former SSP Rao Anwar who is alleged of killing a Waziristan man in Karachi in a staged police encounter on January 13.

The demonstrators were joined by thousands of people from D. I. Khan, Tank, Peshawar, Bannu, North Waziristan and some districts of Balochistan who reached Islamabad after five days of travelling from their hometowns.

The charged demonstrators chanted full-throated slogans: “Down with terrorists, hang Rao Anwar, we demand justice and stop extrajudicial killings of Pashtuns.” They were marching on roads and the protest converged into a big demonstration.

According to a ballpark estimate, around 3,000 demonstrators gathered in Islamabad who demanded justice for Naqeeb Mehsud and other people killed in fake police encounters in Sindh.

Speaking on the occasion, Fawad Chaudhry of PTI expressed condolences on his party’s behalf on the tragic killing of Naqeeb and assured his party would extend all possible support for the legitimate cause of “Shaheed Naqeebullah Mehsud” whose heirs demand the arrest of Rao Anwar.

“The dirty game of extrajudicial killing should be stopped forthwith and those involved in the gruesome killing of the Waziristan man in Karachi should be given exemplary punishment,” Fawad remarked.

Senator Saleh Shah said hundreds of Naqeeb like young men from FATA, specifically Waziristan, parts of Punjab, Sindh and Balochistan had been killed in similar encounters in Karachi. “We demand thorough investigations into all those encounters,” he reiterated.

Shah said the sit-in would go on till the arrest of “Rao Anwar and his gangs” and there would be no compromise on the death of Naqeebullah Mehsud whose martyrdom paved way for hundreds of families from rest of the country to come forward and register their protest.

“Now it is the responsibility of the state to console our people and nab the main culprit behind Naqeeb’s killing. Because of terrorism, we had to leave our homeland but we have now been subjected to terror in down districts, which is height of injustice,” he noted.

Saif-ur-Rehman, a tribal elder and PTI member in Karachi, said he had registered several complaints against the injustices perpetrated by former SSP Rao Anwar but no one was ready to listen.

“Rao Anwar has staged around 118 fake encounters in which over 400 our people had been killed in Karachi. The graveyard in the vicinity of Al-Asif Square in Karachi is filled with our people killed by Rao Anwar,” Rehman recalled.

He said every step within the law would be taken to get Rao Anwar arrested and his gangs of network dismantled.

MNA Maulana Jamaluddin said his community was fully satisfied with the steps taken by the Supreme Court of Pakistan and the government but the Sindh government should extend cooperation to Sindh police to detain the wanted man involved in the “dirty game of killing innocent people in fake encounters.”

A three-member bench presided by the chief justice, was conducting a suo motu hearing on the murder of Naqeeb Mehsud.

The chief justice remarked: “The state has been blamed for his murder. Those who were responsible for providing security are being accused of murder.”

In addition to Rao Anwar arrest, the demonstrators demanded a judicial commission should be setup to investigate all extrajudicial killings in Karachi, the missing persons be produced before the court and unexploded Improvised Explosive Devices (IEDs) should be removed from FATA and specifically South Waziristan.

A protester Manzoor Khan who was leading protesters from D. I. Khan said that landmines explosions left 78 persons dead and wounded in South Waziristan, which should be removed.

The Supreme Court directed intelligence agencies to extend cooperation to trace Rao Anwar. The court gave 10 more days for the former SSP Anwar arrest. The case is adjourned until February 13.