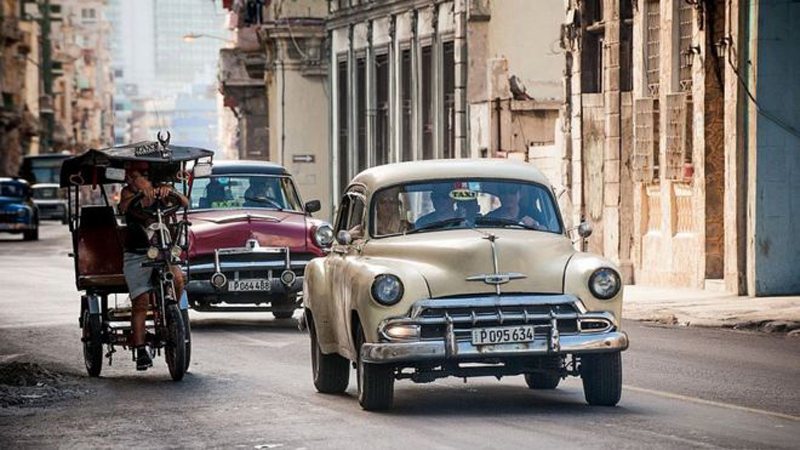 If you had to choose a spot from which to set up an international brand, the chances are you wouldn’t pick Old Havana.

The crumbling colonial heart of the Cuban capital is undoubtedly beautiful and its bustling streets might inspire creativity among your team.

But it is also loud, hectic and, most importantly, almost completely offline.

Still, a small shop on one of the old city’s narrow streets is trying to do exactly that. Under a sign in the shape of a T-shirt, Clandestina design store began in early 2015 with a simple idea.

“Design is not unique in Cuba, but what is maybe unique to us is commercialising a space for Cuban designers,” explains Leire Fernandez, co-founder of the brand.

Often, such shops are defined as “art galleries” or similar euphemisms in the complicated process of obtaining a private business licence in Cuba. Clandestina, however, is unabashedly a shop.

“I think timing for us was really important”, explains Idania del Rio, the other business partner behind the venture. “We opened only three months after Barack Obama and Raul Castro announced the ‘new era’ in Cuba-US politics and I guess we benefited from that a bit.”

Business has been brisk, almost from day one.

Their emblematic slogans – including “Actually, I’m in Havana” and “99% Cuban design” – adorn T-shirts, handbags and posters. Their products have been selling fast and the small shop is often full of free-spending tourists.

Thus far, the team at Clandestina have done almost everything by themselves and by hand.

They print their T-shirts using a silk-screen press at the back of the shop, for example. It is slow and laborious work and at times it’s been difficult to keep up with demand.

Now though, the brand is expanding beyond the island.

Firstly, they’ve moved part of their production to the United States. Idania shows me videos of their T-shirts coming off a factory line in South Carolina.

Mechanising the process will produce many more units than last year – but reaching customers abroad, beyond the tourists who wander into the shop in Havana, has always been a challenge.

So, they have moved into e-commerce and built a website.

“We discovered when we launched the website that there are not only people in the States who are interested in us”, says Leire Fernandez as she pores over the latest sales figures.

“There are people in Singapore, Australia, New Zealand, United Kingdom, you name it, who want to buy our products. So our focus now is to put Clandestina on a global stage.”

Launching an online clothing site might not sound that innovative, but Cubans and visitors to Cuba know how complicated and costly it can be to get online, even for an hour.

Now try to imagine running a business that way.

The two entrepreneurs use the public access wi-fi in a nearby square, sitting with their laptops amid people walking their dogs or playing dominoes.

Things are slowly improving in internet access. The Cuban government has installed more wi-fi spots on the island and the cost of an hour online is much lower now than two years ago.

Still, a pilot scheme to allow the internet in private homes is yet to be rolled out and it’s all a far cry from working in the sort of dynamic online economy that their competitors enjoy.

“I grew up in a country that is becoming very different now. Cuba is changing, it’s not a secret,” acknowledges Idania.

“People here are worried about that. But we need also to learn things from other places, other societies, other cultures so we can integrate Cuba into this new, chaotic world.”

Clandestina is often held up as an example of a successful Cuban private business. Idania del Rio even met President Obama during an event for Cuban entrepreneurs during his historic trip to Havana in 2016.

In answer to her question about removing obstacles for Cuban businesses to grow, Mr Obama answered with a question of his own:

“Where can I buy a couple of those T-shirts?” he joked. “I think Malia and Sasha might want a couple. And I still have some pesos to spend before I leave!”

Clandestina later gave him a couple for the president’s daughters to wear back in the US.

Months after that jokey exchange though, bilateral relations aren’t nearly so warm under President Trump. He has pushed back on several areas of President Obama’s thaw with the communist-run island, in particular travel and trade.

Cuban small businesses are all trying to take the new rhetoric from White House in their stride. Another fashion outlet, a magazine called Garbos, has also just launched online. “This context was already very tough”, says Idania, referring to a combination of Cuban bureaucracy and the US economic embargo on the island. “Now with Trump, it’s a little bit tougher.” “Still”, she adds with a grin, “I think we can try to be a bit tougher as well.”