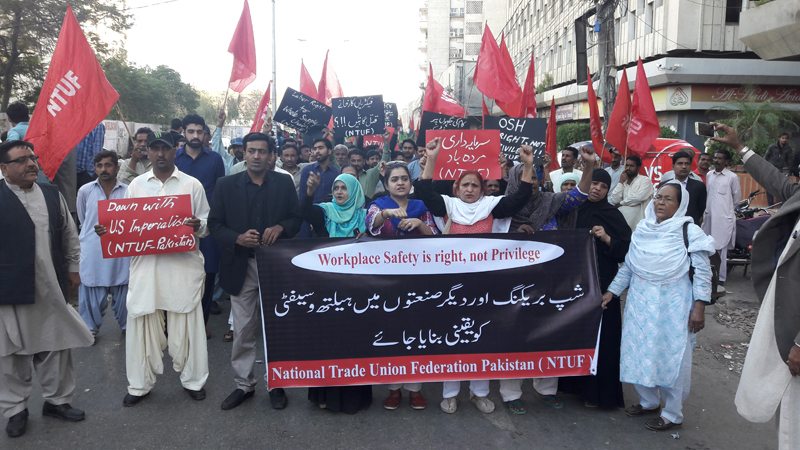 KARACHI: The National Trade Union Federation (NTF) hold a protest outside the Karachi Press Club on Sunday against the continuous loss of lives and other casualties in accidents at workplaces at Gadani shipbreaking yard, mining, textile and other industries across the country due to deteriorating health and safety situation and lack of labour laws implementation.

On November 1, 2016, 29 workers were killed and several others wounded after a decommissioned oil tanker, Aces, caught fire during its dismantling at Gadani shipbreaking yard, Balochistan. The fire rapidly engulfed the whole ship and intensified apparently due to the presence of flammable gases and liquids on it. Workers alleged that due to absence of the required safety measure, such tragedy reported. It took at least three days for fire fighters to put out the blaze.

The protesters said that 10 more workers had been killed and dozens were injured in similar incidents since the November 1 tragedy. According to International Labor Organisation, around 2.3 million workers are killed annually at workplaces across the world.

“If the situation is not improved and handled consciously then no wonder that Pakistan may top that list,” said speakers.

The demonstration was led by NTUF deputy general secretary, Nasir Mansoor, as a large number of workers from various industries took part in it, holding placards inscribed with demands.

They said that non-implementation of labour laws in industrial workplaces across the country, the adamant denial of maintaining the universal standards of health and safety by the factory owners and the criminal negligence of the authorities concerned had forced workers in an alley of death where they met with accidents that crippled them for life and killed them.

They cited the incidents of Baldia factory fire in which 260 workers were killed as a fire gutted the garment facility on September 11, 2012.

They said that employers and the government were least bothered about the lives of workers that run their business operations and earn them profits. They said that the NTUF and other labour organisations were raising the matter for long that the workplaces were unhealthy, unsafe and in dire of needs of health and safety reforms. Unfortunately, the authorities concerned have learned no lessons from the previous disasters, they added.

Shedding light on plight of miners, they said that miners face similar perils as their fellow workers in other industries.

They asserted that employers, government and the authorities concerned were directly responsible for the casualties, alleging that they care more about their profits and bribes than the precious human lives.

Mentioning the health and safety bill, formed after a tripartite consultation that was passed recently in the Sindh Assembly, they appreciated the move and insisted that it was a mere document unless its contents are implemented in letter and spirit. And it was linked with bringing improvement measures across the country, they said, adding that a strict implementation of labour laws, labour inspection and training workers with dealing with emergency situations could help improve the situation.

They demanded that labour laws should be strictly implemented in factories and other workplaces, training of workers about dealing with emergency situations and using safety tools should be mandatory, the health and safety like the one in Sindh should be made in other provinces too, private social auditing should be abolished and labour inspection should be made effective.