14 foreigners among 18 killed in overnight battle at Kabul hotel 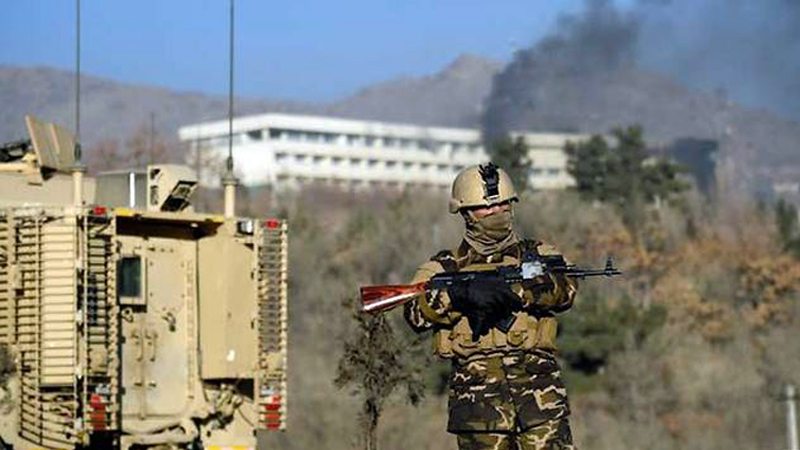 KABUL/ISLAMABAD: Afghan officials Sunday confirmed that 14 foreigners among 18 people had been killed in the Taliban-claimed overnight attack at Kabul’s Intercontinental Hotel that also sparked international criticism at the fragile security situation in the capital city.

Kabul police chief Salim Ehsas said that slain foreigners included one from Greece, one from Kazakhstan, nine Ukrainians and one from Germany. He said identity of two foreigners was still being established, adding 10 people, including six policemen, were injured in the attack.

Local airline Kam Air said around 40 of its pilots and air crew, many of whom are foreigners, were staying in the hotel and as many as 10 had been killed.

Wahid Majroh, a spokesman for the ministry of public health, said 19 bodies had been brought into city hospitals, with six identified as foreigners. The number of casualties may climb higher, however.

Afghan Interior Minister Wais Ahmad Barmak told BBC Pashto in Kabul that the attackers had inside support in the hotel. He said the hotel security was recently handed over to a private company which he described was a ‘mistake’, while announcing to hold investigation into the deal.

Afghan Taliban claimed responsibility of the attack. Spokesman Zabihullah Mujahid said in a statement that a group of five bombers took part in the operation. He said the bombers targeted ‘nationals of invading countries and officials of the Kabul administration’. He said the attackers also fired at a meeting between Afghan officials and the Americans. He said clashes continued for 14 hours.

The Afghan Interior Ministry accused Haqqani network of carrying out the attack, which it claimed operates from outside Afghanistan. The interior ministry did not name any country, however, Afghan officials had long been claiming the group was operating from Pakistan, a claim rejected by Islamabad.

More than 150 guests were able to flee as parts of the building caught fire, with some shimmying down sheets tied together and dropped from upper-floor windows and others rescued by Afghan forces.

Abdul Rahman Naseri, a guest who was at the hotel for a conference, was in the hall of the hotel when he saw four gunmen dressed in army uniforms. “They were shouting in Pashto (language), ‘Don’t leave any of them alive, good or bad’. ‘Shoot and kill them all,’ one of them shouted,” Naseri said. “I ran to my room on the second floor. I opened the window and tried to get out using a tree but the branch broke and I fell to the ground. I hurt my back and broke a leg.”

The Intercontinental is one of two main luxury hotels in the city and had been due to host an information technology conference on Sunday.

More than 100 IT managers and engineers were on site when the attack took place, said Ahmad Waheed, an official at the telecommunications ministry.

Hotel manager Ahmad Haris Nayab, who escaped unhurt, said the attackers had got into the main part of the hotel through a kitchen before going through the hotel, with many guests trapped in their rooms.

“When the sixth floor caught fire this morning, my roommate told me, either burn or escape,” said Mohammad Musa, who was hiding in his room on the top floor.

“I got a bed sheet and tied it to the balcony. I tried to come down but I was heavy and my arms were not strong enough. I fell down and injured my shoulder and leg.”

In Islamabad, Foreign Office Spokesman Muhammad Faisal rejected what he called ‘the knee jerk allegations’ by some Afghan circles pointing finger at Pakistan for the terrorist attack in Kabul. “There is a need for credible investigation into the attack, including on reported security lapses,” Fasial said in a tweet.

Former Afghan defence minister Shahnawz Tanai said the armed opponents including the Taliban were now mainly focusing on guerilla attacks and that it was difficult for the security institutions to stop such attacks.

Tanai told Daily Times via phone from Kabul that both government forces and militant groups try to take advantage of each other’s weaknesses and mistakes.

“Afghanistan now faces a guerrilla war which is difficult to handle. It is not an organized war now,” Tanai said.