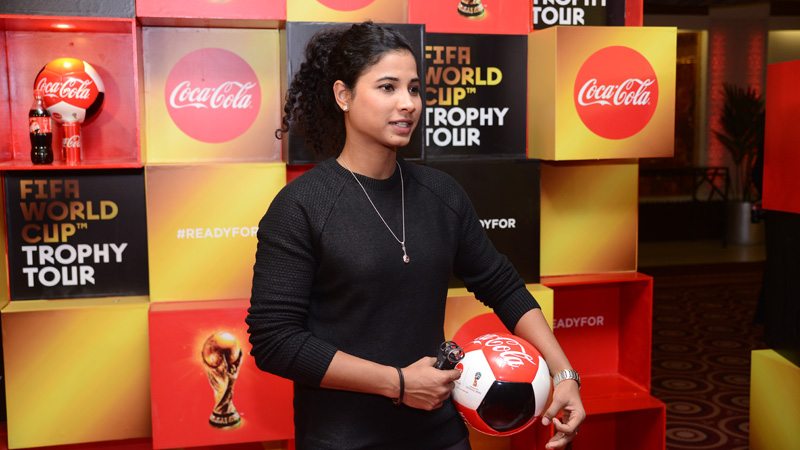 ISLAMABAD: Pakistan women’s football captain Hajra Khan wants to promote women’s sports in the country. In an interview the other day, Hajra said it was not easy for women in Pakistan to pursue their dreams. “There’s prejudice and resistance, especially in sports, and not just in Pakistan; I think this exists to an extent across all professional spheres around the world. Though I must say I am lucky to have always enjoyed the support of my family and friends. It’s been a tough journey but I’ve proved that a Pakistani woman can achieve what any Pakistani man has in this “male-dominated sport,” she added. Born in Karachi in December 1993, Hajra is only 24 years old. Yet it is from an early age that it has been her dream to become a professional athlete. Her hard work, worthy skill and most importantly, her tenacious spirit led to her achieving that, as well as much more. Today she is a renowned footballer and the captain of the Pakistan women’s national football team – a role she took on in 2014 after playing on the team since 2009. Along her national and club duties, Hajra is a business student currently completing her undergraduate education. She is an avid Manchester United supporter and follows the Premier league and Bundesliga religiously.

“It’s not easy but I’ve strived through it all. I praise Pakistan star Kaleem Ullah, who made his way to the USA on account of his hard work and I will too, with my hard work, prove that Pakistan has great talent. I want to play club football internationally and experience European football. Playing in Europe has been one of those dreams that I have been aiming for since the very beginning. And it finally became a reality when I trained with top clubs in Germany,” she added. “I want to advocate the growth of women in sports. And things are gradually getting better for sportswomen in Pakistan too. That’s not taking away from the fact that we have a long way to go.”

At 14 years old, Hajra won the “Top Scorer” Award of the Tournament with Diya Women’s Football Club. In 2014 she was again awarded this title by adding a whopping 30 goals to her name over the span of just six matches with Balochistan United. And in 2014 when she accepted the offer to play with SHR Maldives, she became the first Pakistani female footballer to sign an international offer. In addition to this, after training there for a month, Hajra was invited by three German Bundesliga clubs for training try outs: SGS Essen, MSV Duisburg and VFL Sindelfingen but was unluckily unable to accept invitation due to visa issues.

Unfortunately, visa is just one of the minor hurdles in the way of truly allowing football in Pakistan to progress to an international level. More significantly, late last year, the Pakistan Football Federation was suspended by FIFA because of “undue third-party interference.” Furthermore, lack of infrastructure, inadequate funding and awareness all contribute to Pakistan’s extremely low world ranking.

Hajra lamented the state of Pakistan football. “Pakistan is left unranked due to inactivity for quite a while. We will soon lose a place on the list if things remain the same for a prolonged period of time. It has been years that the national federation has been dysfunctional. We missed the South Asian Games, the SAFF Cup, the AFC Qualifiers. This is very demotivating for all the players. We are unable to play competitive football at home. But we are battling hard to promote football in Pakistan – to keep the game alive. The women’s team has been inactive for three years and so I have personally been trying to get friendly matches abroad. Everyone is advocating and hopeful for a more promising future.”

To a question regarding her plans moving forward, she replied: “Money and fame come along with self-recognition, but they are only a by-product. I started here in Pakistan, but I also aimed high and found out more about myself through the sport. So I hope to continue being an advocate for the growth of women’s sports in Pakistan and in the future, launch a grassroots football training academy for female players.” Hajra said sports had taught her to show respect for others. “Sports have taught me fairness, grace in defeat and humility in victory. I’ve learned to take a little more than my share of blame and a little less than my share of credit. It’s helped me gain respect for my body, develop self-esteem, and to believe that I have everything I need within me to become the best possible version of myself.”

On her thoughts on the FIFA World Cup trophy coming to Pakistan for the first time, Hajr said it was a proud moment for Pakistan and for Pakistani fans to welcome the trophy here in our country and it would be huge. “The fact that there are only three countries in South Asia to which the World Cup trophy is coming to, and Pakistan is one of them. It’s a great honour. I truly believe football has a promising future here and I can’t wait to witness and be a part of it,” she stated. Hajra was all praise for Coca Cola Pakistan. “I think the fact that Coca-Cola Pakistan is undertaking this initiative for the development of the sport and to encourage players is a great start; it will make the FIFA World Cup moments long-lasting and memorable. Football is one of the most popular sports in Pakistan and alongside endorsing an active lifestyle, it encourages values such as team spirit, friendship and respect,” she concluded.