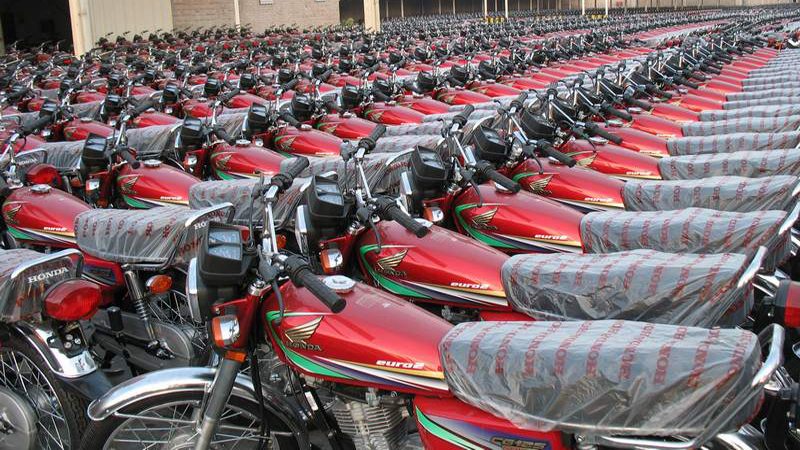 KARACHI: Motorcycles production in Pakistan is reaching to its highest level with 2.3 million quantity of produced during the ten months of 2017 while average 7,408 new motorcycles hit roads daily in the country.
The production of motorcycles increased by 22.34 percent during the first four months of fiscal year 2017-18 (FY18), as compared to the corresponding period of last year, latest data of Pakistan Bureau of Statistics (PBS) revealed.

PBS’s latest data reveals that the motorcycle production including locally assembled Japanese brand and Chinese made imported motorcycles’ brand stood at 2251917 units in the first ten months (January-October) of 2017. It is to be noted that at least 2.5 million motorcycles were manufactured during past year while the number of motorcycles’ production in Pakistan has already crossed the 2 million mark in just ten months of this year.
It has been observed that in the absence of any public transport system in Pakistan, lower middle-income class of the country has been compelled to compromise their safety by choosing the two-wheelers as their conveyance.

He said rapid motorcycle production in Pakistan apparently portrays brighter picture but it is a harsh reality that among 2 millions motorcycles produced in 2017 we didn’t manufacture even a single bike here with 100% Pakistani parts.

“It is true that motorcycle industry is booming and providing opportunities for locals and supporting the economy. But Pakistan is still far behind from its neighbouring country as Indian company Hero started manufacturing with Honda Japan and now it has become a separate entity bigger than Honda”, he added.
Association of Pakistan Motorcycle Assemblers (APMA) Chairman Mohammad Sabir Shaikh said globally, there is an average life of a motorcycle, but in Pakistan with the nonexistence of any such law, the tax departments are allowed to collect lifetime tax at the time of registration of a new bike.
He further added that the situation is really alarming as the authorities don’t follow any standards for motorcycles’ registration which is making the motorcycle as the leading cause of fatalities.

He was off the view that the government should set the effective life limit of a motor cycle for tax reasons since the tax offices use 100 years as their average life at present. He suggests that the tax authorities should register a motorbike only for five years and after that period the registration of the motorbikes should be subjected to fitness tests.