Speak up for missing activists

The day we realized Raza is missing was perhaps the most terrifying moment to experience by those close to him. I could not even fathom a dear friend, a harmless, humble soul, could ever become a victim of enforced disappearance. The panic and terror we felt cannot be explained in words, nor can we conjure that someone might even have an enmity with him. The day we started searching for him, at police stations and at hospitals in Lahore, his family home in Kasur and checked with other friends and relatives, there was no sign. We decided to finally break the lock of his apartment in the presence of police and his brother, only to find the lights still on, his clothes lying around and the CPU missing. We knew what it was, but we didn’t want to believe it. Moreover, the family received no phone calls for ransom so it became evident that it was not a normal kidnapping.

The police was reluctant to register the complaint, as often , they feel intimidated themselves in dealing with such cases. They did finally give in to our constant persistence, but by then, the precious time was already lost to promptly begin a formal investigation. Oddly enough, even with this painfully slow process, we were thankful enough that they did at least register an FIR against unknown persons. The ‘unknowns’ here are in fact very familiar to us, as the pattern in all such disappearances are almost identical, something which the recovered missing bloggers often talk about. A prominent journalist, Taha Siddiqui,  who recently managed to escape an abduction attempt, disclosed at an event that they had taken away the drive in which he had saved all the data while working on Raza Khan’s and Zeenat Shahzadi’s story. 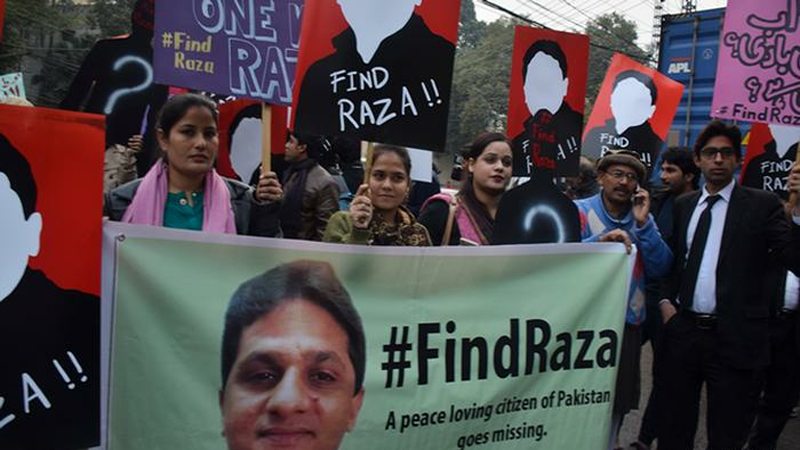 A habeas corpus petition was filed at Lahore High Court with the hope that an investigation will pick up pace and the relevant authorities would be held accountable, but the speed with which the process is taking place makes the entire system dubious. The last hearing was held on January 9th, where the General Attorney was to appear as per the court order, but he did not. The honorable judge also advised the counsel that the Defence Secretary should be approached to seek information on Raza Khan. January 22nd has been set as the next date of hearing and despite all the unnecessary delays in a matter of extreme emergency, we still hope for some positive development. Call it our wishful thinking that the importance of due process of the law will be asserted and dealt with utmost urgency.

There is no justification that a law abiding citizen gets picked and illegally detained, tortured and terrorised and is left with excruciating stigma for the rest of his life of enduring the horror in his torture cell. It clearly violates the constitution of Pakistan, which has enshrined within it the duty of the state to provide protection to an individual, to ensure safeguards as to his arrest or detention, to ensure a transparent and fair trial, to ensure his right to free speech and his dignity. Unfortunately, even though the constitution considers all laws or ordinances inconsistent with the fundamental rights of a citizen to be void, things do not appear to be so. The expressed inability of the judiciary in providing answers to the aggrieved relatives and loved ones is dismaying. There is a hushed up admission that the trend of enforced disappearances is in fact increasing, and it continues to be so unabashedly.

These abductors are constantly tarnishing Pakistan’s international image. Although actual figures of victims of enforced disappearances may be many times more than the official tally of the Commission of Inquiry on Enforced Disappearances, in the month of December alone, 92 cases of missing persons were reported to it. Also, between August and October 2017, 300 cases were reported with the commission, making it the largest number of cases received in a short span of three months since its inception in 2011. Yet, despite these cruel numbers, the government remains clueless about the fate of most of the victims. The commission has so far failed to fix the responsibility on the abductors, nor have they been able to indict any perpetrator so far, even if their names have been disclosed in the complaints.

The policy of the state to allow this to happen with impunity; its failure to sign the international convention on enforced disappearances and its failure to criminalise, or even condemn it, has brought more diplomatic dilemmas for the country. During the third cycle of Universal Periodic Review of Pakistan held in November, 2017, the Report of the Office of the UN High Commissioner of Human Rights mentioned enforced disappearances nine times in its dossier, detailing how they have gravely affected the fundamental rights of the citizens. It is not just our diplomatic relations that have become vulnerable, but there is also a possibility of further economic curtails. Pakistan faces the risk of losing its preferential status of the EU which was awarded to it in 2012 for a period of 5 years. Recently, the commission conveyed its warning over deteriorating human rights record, and particularly over enforced disappearances. Speaking on Raza’s disappearance, a spokesman mentioned that a special monitoring body, European External Action Service, along with the commission, is closely monitoring Pakistan’s implementation of core human rights international convention. Pakistan’s GPS Plus status with European Union allows it to export up to 20 per cent of its goods tariff-free exports in European markets, and with 70 per cent, to be given preferential rates. One can imagine the economic impacts if this concession ceases for this already suffering nation.

People have also started questioning the complete lack of transparency of the state. With shrinking spaces for free speech, citizens are beginning to feel the effects across the country, directly or indirectly

Prominent human rights bodies have issued statements over enforced disappearance of Raza Khan and many others in the country. International Commission of Jurists, Amnesty International, Asian Commission of Human Rights and Frontline Defenders, among many others, have already expressed their dismay. People in London, Washington DC, Brussels and Berlin have  protested in front of Pakistani British High Commission and embassies in their respective countries. Prominent international news outlets have also informed the world about Raza’s incident.

People here have also started questioning the complete lack of transparency of the state. With shrinking spaces for free speech, people here are beginning to feel the effects across the country, directly or indirectly. Seminars and protests demanding recovery of missing persons have also been held in different cities in Pakistan, with more people speaking against the government allowing the lives of law abiding civilians to be endangered. People have also started questioning the role of security agencies and their terror tactics to silence dissent and social activism. People have started questioning as to why a peaceful citizen are still missing while a self-confessed terrorist Noreen Leghari enjoys all the privileges as a citizen. They are also asking why sectarian extremists are mainstreamed, and peace activists like Raza Khan are punished for no crime. These questions will be raised more, if more constitutional rights of the citizens are curtailed. It is time for the state to realise that the strategy it has adopted against its own people in the name of security, is doing more harm than good.

The writer is a freelance columnist and may be contacted at zeeba.hashmi@gmail.com