The enduring plight of Christians in Pakistan

Causing bloodshed in the name of Islam is unforgiveable, unforgettable and inhumane. It is not a religious duty — quite the opposite

One day after the third anniversary of the Army Public School (APS) Peshawar massacres, Christians became the latest target of terrorists. It was a Sunday morning when terrorists targeted the Bethel Memorial Methodist Church, Zargoon Road Quetta, where about 400 Christians were gathered together for the nativity service. This is a special service held during the Christmas season, which is a time of year when churches are packed everywhere in the world. Christmas is only a few days away and Christians are busy in preparations and attending Christmas programmes like carol services and nativity plays. It is unthinkable that there are those who want to turn these celebrations into mourning.

Causing bloodshed in the name of Islam is unforgiveable, unforgettable and inhumane. It is not a religious duty — quite the opposite. The perpetrators may have thought they were going to ruin these Christmas celebrations, but I think this attack has caused more damage to Islam and Pakistan than anyone else.

Christmas used to be a Christian religious festival, but I believe it is now a festival marked by everyone as something cultural. It is a time for sharing and connecting with loved ones and it is celebrated almost everywhere in the world, even in some Muslim countries, by both Christians and non-Christians alike.

According to Pew Research Centre, 81 percent of non-Christians in the United States celebrate Christmas. The situation is similar in Europe. When Baroness Warsi, who is of Pakistani origin, was a minister, she told the media that Christmas is for everyone and Muslims should celebrate Christmas. And why not as Christ is also a prophet of Islam.

According to some reports more than 50 were injured. It is not clear how severe their injuries are, but photographs on social media suggest that while many may recover physically, the spiritual and emotional impact of living with trauma will be severe and long-lasting.

We know this is not the first attack on a church; we have witnessed many in recent years. In 2013, All Saints Church in Peshawar was attacked by two terrorists who killed at least 83 people, with many more injured, some of them suffering life-changing injuries. In 2015, Taliban suicide bombers attacked Youhanabad churches in which fourteen people were killed and more than 75 were injured. The incident sparked mob violence in which two other suspected militants died. Such reactions of mob violence and vigilante killings are becoming increasingly frequent, especially in cases of blasphemy accusations.

Even after 70 years of independence, Christians are not fully integrated into the political process in Pakistan and many remain vulnerable to Pakistan’s notorious blasphemy laws, which are often used as an excuse to punish them. Again, the government has failed to intervene to provide security to the marginalised community

Instead of investigating and seeking justice for the community of Youhanabad, the government started arresting Christians on the streets and in their homes. For many days, the location of many of these Christians was unknown. According to some reports, more than 150 people were arrested, with 83 arbitrarily detained for murder and vandalism. Some were released last year, but 43 are still in the prison. 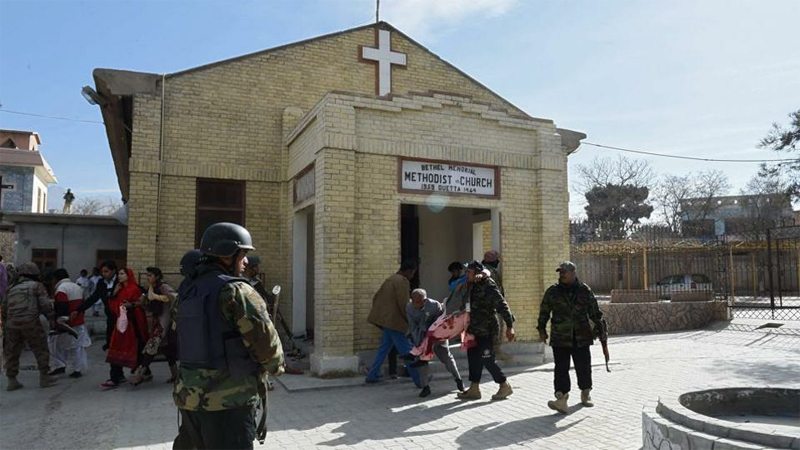 Three of the victims, Nazir Masih 56, Usman Shaukat, 29, and Indriyas Ghulam recently died in prison. In March, those detained were not offered justice but a deal for their guaranteed acquittal by the Deputy District Public Prosecutor Syed Anees Shah if they converted to Islam. Some Christians say that if the Faizabad rioters can be freed, then why are the Christian protesters of Youhanabad still in jail?

On Easter Sunday in 2016, in another terrorist attack 75 Christians were killed while more than 340 were injured.

Now Quetta is in the headlines for a similar attack. Where next? It is time for this to stop. It is not only Christian churches under attack, but Christian settlements also, like Shanti Nagar, Gojra, where eight Christians were burnt alive, and Joseph colony, Lahore, where a mob of thousands set fire to more than 40 Christian houses in a revenge after a Christian man, Saawan, was accused of blasphemy. There is an ongoing campaign of hatred that the government is failing to stop.

Despite being under constant attack, Christians have not been given assurances of protection by the government. Instead, Christians are living in fear and sense that they have been abandoned by the state. It is important to assure Christians, and indeed all minorities that the perpetrators will be punished.

Seeing how bad things have become, it is obvious why many Christians are leaving the country

But the government of Pakistan has to do more. The army has waged a long bloody war but terrorism continues. We need all institutions to work in collaboration to end terrorism and establish peace. Also, there is also a need to fully implement the National Action plan and the Supreme Court’s order of June 19, 2014 regarding protection for minority places of worship — and this is the responsibility of the government.

Seeing how bad things have become, it is obvious why many Christians are leaving the country.

Even after 70 years of independence, Christians are not fully integrated into the political process in Pakistan and many remain vulnerable to Pakistan’s notorious blasphemy laws, which are often used as an excuse to punish them. Again, the government has failed to intervene. Biased education in schools is another issue that needs to be tackled to stop extremism and hatred against Christians and other religious minorities. Many Christians and other religious minorities feel like aliens, marked by the violence inflicted upon them.