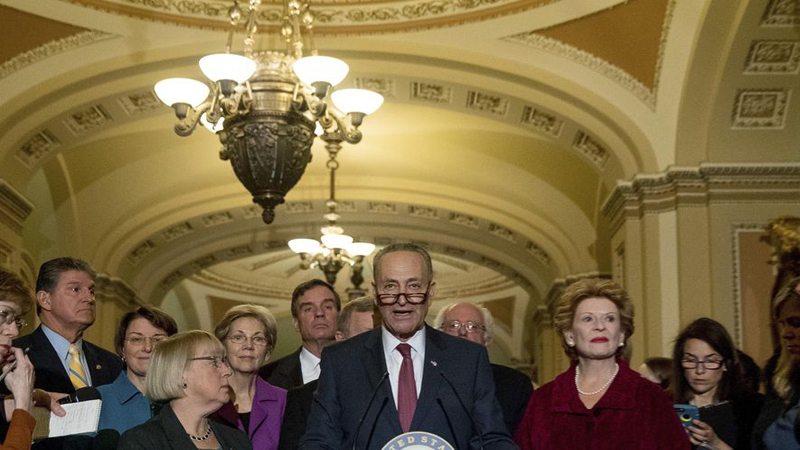 Washington is more partisan than ever, and the examples are too numerous to count. The current political fight over tax reform legislation provides only the latest such case. Democrats have specifically supported several of the key provisions in the tax reform bills working their way through the House and Senate:

* They have specifically supported cutting the corporate tax rate, a position that former President Barack Obama has supported.

* They have supported ending the individual mandate penalty, a tax that former President Bill Clinton called “the craziest thing I’ve ever seen.”

* They have supported expanding the child tax credit.

* They have supported increasing the standard deduction.

I think this can be partially explained by unanimous Democratic opposition to everything President Trump says or does, irrespective of what it is. The Democratic base is rabid and demands absolute opposition.

But the deeper reasons for Democratic opposition to these legislative proposals come down to two things: government power and fear of the bill’s success.

First, Democrats strongly defend government power in nearly every instance, and that power directly comes from the size and scope of the federal government. Democrats oppose all spending cuts, no matter how marginal they are. Any cut reduces government power.

Second, Democrats have been loudly proclaiming that the tax reform bill will “raise taxes on the middle class” and “overwhelmingly favors the wealthy.” They were making these arguments before the bill was even released.

A recent analysis by Chris Edwards at the nonpartisan Cato Institute found that those making $40,000-$50,000 would see their income and corporate taxes reduced the most (51 percent) in 2019. The next biggest tax cut? Those making $50,000-$75,000 (24.4 percent). Middle income earners benefit most in the Senate’s version of the tax reform bill.

These Democratic class warfare arguments are nothing more than are tired talking points. But they do not truly explain their fierce opposition.

Supply side economics is the argument that lower tax rates improve private sector incentives, which leads to higher employment, productivity and economic output. It worked in the Kennedy and Reagan eras. Democrats oppose supply side economics because they need to confiscate the wealth of citizens to fund big government.

In my view, Democrats don’t truly fear that this tax cut plan will fail; they fear that it will succeed.

We have already had two consecutive quarters of 3 percent economic growth, a level that was never achieved on an annual basis for even one year of President Obama’s tenure. This positive economic environment has been caused by the Trump administration and the Republican Congress rolling back the regulatory state, reducing regulations by a ratio of 16 for every new regulation that is passed, according to American Commitment’s Phil Kerpen.

Democrats cannot politically afford to see the Republican tax reform package pass and then succeed in the eyes of working Americans. Undoubtedly, the results of the reform are what will matter. If they foster faster economic growth, job creation, and higher salaries, then they will succeed substantively and politically. If they don’t, then they will fail on both counts. The tax reform bill will ultimately meet President Trump’s three criteria:

* Reducing taxes for businesses of all sizes to help them grow, create jobs, increase wages and improve global competitiveness.

Democrats are playing a dangerous game. They cannot stop the tax reform bills legislatively, because the reconciliation procedure prevents a Senate filibuster and enables passage on a majority threshold in both houses.

Will they stand by and watch this bill pass and be signed into law before year’s end, beginning to result in larger take home pay for workers in January and greater quarterly economic growth in 2018, as the midterm elections draw near? Power and fear explain their opposition. I predict they will regret their political calculation.