Qandeel Baloch is history now and history is my favourite subject

They say “well behaved women seldom make history” and three days after the first death anniversary of Qandeel Baloch, I want to say yes, that’s true and yes Qandeel Baloch, you made history. You made history by not conforming to societal norms that define a woman by setting boundaries for her.

I don’t want to explain anything; the whole world knows by now who she was and what happened. Since her murder, a lot had already been said and written about her. Then why am I writing this? Because I still mourn her. My heart cringes with anger that QB is no more with us.

Patriarchy isn’t restricted to men only, just like feminism isn’t an ideology supported only by women. It takes a woman to make a man, a son, a husband and a father. In our society, a pervasive misogynistic culture is being cultivated to protect a toxic masculinity, for which someone said “masculinity is so fragile that a woman just needs to breathe to hurt it”. They think she is in hell, and I say “she left one”.

And to quote famous writer Saadat Hassan Manto “if you find my stories dirty, the society you are living in, I only expose the truth with my stories.”

Judging a person does not define who they are, it defines who you are. People destitute her of her life by slut-shaming her. Qandeel was an innocent girl who was craving for attention, don’t we all want attention? Don’t we all do stupid things just to get noticed by other people? We have failed her as a nation. We couldn’t accept her for who she was. Her lack of enforced shame to women seemed like a revolution. She was a feminist. 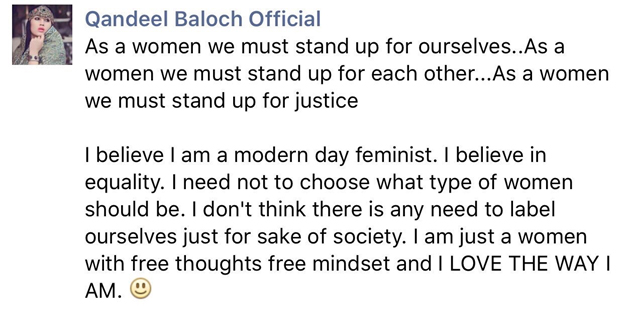 Qandeel Baloch once said “if I die, there won’t be another Qandeel Baloch for [a] hundred years”. Exactly, there will never be another Qandeel Baloch, because every time there is one, we kill them. We kill them in the name of honour, Islam and misogyny. An unchained free thinker like Qandeel Baloch deserved to live. Acceptance of her death is chilling, because she was an internet sensation trying to break the norm. Did anyone ever try to kill Madonna; she has been breaking the norms since 1980s. Did anyone ever try to kill Lady Gaga who is outrageous? Kim Kardashian is being hated by millions, why she wasn’t killed? Rakhi Sawant and Poonam Panday are despised by many, no one ever tried to kill them. It’s all these hyper-macho males appreciating this cold blooded murder are not to be called humans even. Fault of Qandeel was being in Pakistan. I’m ashamed to be a Pakistani.

Sometimes, I really want this to be a dream and I expect a new video with heavily kohled eyes and a spoilt accent. Depth of this grievance increases with full intensity every time I see her name on social media. She made it to international headlines. But with her death, she was topic of documentaries and there is a TV show based on her life by the name of ‘Baaghi’. That’s all she always wanted but when she got it all she is nowhere to witness it, and it breaks my heart to pieces. I hope one day there are enough Qandeels to scare the entitled blood thirsty vultures in turn. Until then I will miss this one.

“You will not ‘get over’ the loss of a loved one; you will learn to live with it” – Elisabeth Kübler-Ross

The author tweets at @Saadispunk