We must invoke the four Ps of security: Physical Security; Protective Intelligence; People-to-People Contact; as well as Press and Media Power

CPEC has been touted as a game-changer for Pakistan. This ambitious $60 billion venture includes connectivity, energy, and infrastructure projects. Thus it not only offers great opportunities for the long-term economic prosperity of China and Pakistan — it is also expected to afford both a tremendous geo-strategic boost. Indeed, the Corridor is the flagship project of the ambitious One Belt, One Road initiative, which will connect Beijing to markets in Asia, Europe and beyond.

Thus CPEC has tremendous vast potential to rapidly transform regional dynamics in terms of trade, development and politics. This is to say nothing of the new era of reinvigorated Sino-Pak friendship. Nevertheless, all this is unfolding against the backdrop of looming security threats. Internally, the risk comes from the Tehreek-e-Taliban Pakistan (TTP) and its affiliates in Khyber Pakhtunkhwa as well as the tribal areas. Externally, foreign agencies like India’s RAW are said to be actively trying to sabotage the Corridor.

These threats are real and have been around for some time. After all, back in March 2014, the vast network of CPEC highways has been subjected to more than a hundred security-related incidents; with nearly two dozen civilians and military men losing their lives in the process.

The challenge for our military establishment, therefore, becomes immense. Especially when it comes to safeguarding the thousands of additional Chinese workers that are flying in to oversee the linking of Kashgar to Pakistan at Khunjerab; the point from which China wants to connect Gwadar Port in the Arabian Sea.

The proposed Security Division needs to be realised; comprising the Army, police, paramilitary forces and private security. It should then be deployed to secure Chinese manpower and assets against threats of kidnapping, theft and terrorist attacks

Home-grown militant groups have targeted Chinese citizens — construction workers and engineers — in the past. In Balochistan, insurgent groups like the Balochistan Liberation Army (BLA) and the Balochistan Liberation Front (BLF) are known for engaging in anti-state activities. Bluntly put, these outfits pose a grave threat to the mega development projects in the province, including Gwadar. And even though their capacity to do harm has been curtailed somewhat by sustained security operations — the potential to carry out terrorist attacks still remains. 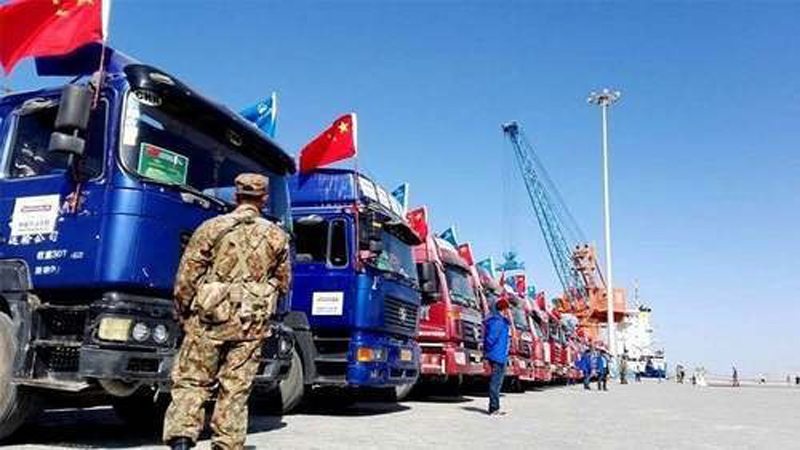 The militant-criminal nexus in certain areas also endangers the safety of Chinese workers, whom are largely seen as lucrative targets when it comes to kidnapping-for-ransom and robberies. Indeed, some have been killed while working in these areas.

As for our eastern neighbour, India vehemently opposes CPEC for the simple reason that it doesn’t want to see Pakistan become an economically strong and viable nation. In short, New Delhi fears that the Corridor will become a fate-changer for us; thereby recasting this country as a powerful regional player. With Prime Minister Narenda Modi last year publicly vowing to mount a global campaign to isolate Pakistan internationally. For our part, our intelligence agencies have been collecting evidence against RAW. What they have found is that the latter is trying to disrupt CPEC by way of fomenting unrest in the already restive province of Balochistan. Fortunately, Beijing understands these constraints. Thus it has been working closely with Islamabad towards providing foolproof security to its personnel across Pakistan. Certainly, we have been doing our bit. We have established special Chinese security cells; with the Special Branch Punjab Police taking the lead back in 2010. Here, both on-site and residential security arrangements are assessed. Following this, a ‘Daily Report’ is shared with the Home Department as well as the Chief Minister Punjab.

The need of the hour is to formulate a comprehensive strategy to keep the CPEC investment safe. And this must focus on the four Ps of security: Physical Security; Protective Intelligence; People-to-People Contact; as well as Press and Media Power. It must be noted here that greater social interaction is essential to fostering mutual understanding in terms of culture and aspirations. Naturally, the media can play a positive role when it comes to deflecting the deliberately orchestrated CPEC-negative propaganda aimed at undermining the Sino-Pak bilateral relationship. And of course, our intelligence agencies must engage in fully coordinated efforts towards all these ends.

The first priority has to be the realisation of the proposed Security Division, comprising the Army, police, paramilitary forces and private security. Once it is up and running, its forces should be deployed with a view to physically securing both Chinese manpower and assets to avert the threat of kidnapping or theft; or, indeed, all-out terrorist attacks. As per the aforementioned proposal: nine Army battalions consisting of more than 8, 000 military personnel; six paramilitary wings; and civil forces with a 9,000-strong security personnel — comprising Rangers, Levies, police and scouts — will assist the military to guard more than 15,000 Chinese workers along the Highway Network route. In addition, a 5,000-strong force will come from the Pakistan Army’s Special Services Group (SSG) — which has special counter-terrorism training. To supplement the above, it is imperative that the state apparatus rigorously implement the National Action Plan. This should involve activating the National Counter Terrorism Authority (NACTA) to monitor security arrangements for the Chinese as well as to advise the provincial authorities regarding appropriate responses.

And then, finally, legislation should be introduced to empower PEMRA; to give the latter some bite when it comes to dealing with certain fifth columnists and ‘agents’ whose only aim is the business of spreading disinformation about CPEC with a view to casting suspicion over the ‘real’ intentions of both the Pakistani and Chinese governments. Therefore, only those programmes outlining the positives of the Corridor should be given air-time. Print media, for its part, should set up special information gathering cells so that updates about CPEC’s development work are not interrupted.

Despite being close neighbours the Chinese and Pakistani citizenries are not particularly familiar with the other’s cultural traditions or distinct lifestyles. A good way of bridging this gap is to have our students learn Mandarin. Thus our universities and colleges must sign MOUs for student exchanges and scholarships. But such reciprocity should also extend to the realm of culture itself.

Meaning that we should be broadcasting each other’s television dramas and films; stocking our bookshops and libraries with each other’s literature; and inviting each other’s cultural troupes to perform. In reality, moves towards this end have already begun. Yet this process needs to be institutionalised. Pakistan-China Peoples’ Centres (PCPC) should be established across urban areas of the country — large and small cities alike — to create cultural harmony between the two sides. All of which will serve to effect a more secure environment for CPEC projects, given that the people of Pakistan will have gained a deeper understanding of the latter’s benefits.