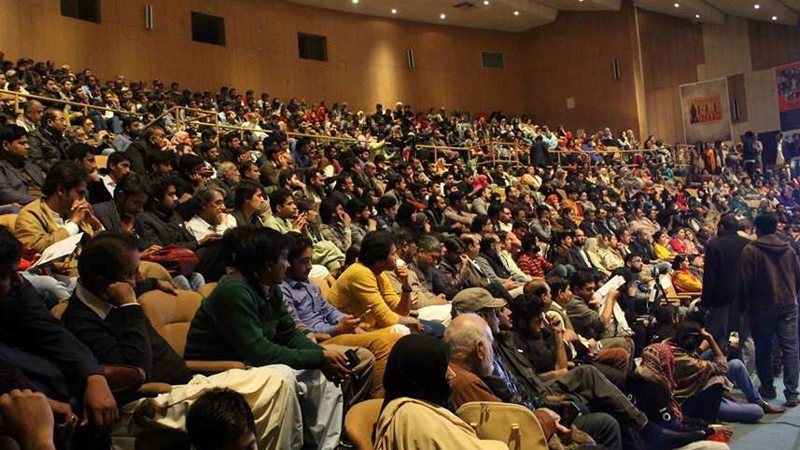 Amid a vocal raging Islamic militancy the nation is regaining its strong cultural heritage and the most recent city to attract packs of crowds and see a houseful auditorium at a literary festival is the city of Faisalabad, where the fourth annual Faisalabad Literary Festival was held at Nusrat Fateh Ali Khan Auditorium.

Faisalabad, formerly known as Lyallpur, was named after its founder British Lieutenant Governor of the Punjab, Sir Charles James Lyall. Lyallpur realized it had great potential in the commercial side and within years, the Industrial boom witnessed a new socio-cultural uniformity – the city was considered a liberal cosmopolitan city often described as the “Manchester of Pakistan,” however, slowly it lost its liberation to radical Islamisation. The city used to form part of the Jhang district and fall in the region of Sandal Bar. The region was the epitome of Literature, Sufiism, Art and Folklore. It gave birth to the likes of Sultan Bahoo, Dulla Bhatti, great revolutionaries such as Bhagat Singh and Rai Ahmed Kharal. It is where the popular tragic love story of Heer Ranjha was composed and famous folklore melodic stories such as Jagga Jutt were told. In recent times the region has seen the rise of notable personalities such as Amanat Ali, Dildar Hussain and the qawali King Ustad Nusrat Fateh Ali Khan.

Somewhere between becoming a booming industrial and metropolitan city of Pakistan and a widespread terror joint for Talibanisation, the city lost its multiculturalism and love for literature. The Faisalabad Literary Festival is not the initiation of literature in the city but a revival of a diamond lost in the dirt.

I entered the fourth annual Faisalabad Literary Festival at approximately 3:00 PM, fashionably late as Faisalabadis often are and to my surprise the auditorium that has a capacity of up to 550 people, was already full. One-third of the hall had empty seats and I clumped around trying to locate a vacant one, however amongst the one-third empty seats in the vicinity, the best were already reserved by management, sponsors and other “important” people. Feeling like a second class citizen I wondered to the opposite side of the auditorium only to realize that I had broken the ardent city segregation and had found myself at the “mardana” end of the hall. For a while the spectators seemed like they had seen a ghost but eventually got used to the idea of a different species sitting amongst them. 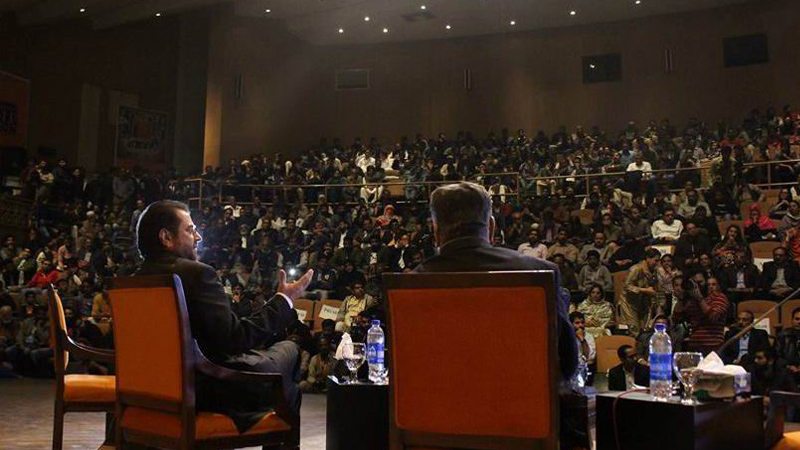 The show was initiated by the soulful voice of Asghar Nadeem Syed: “I sense a breeze of fondness towards literature in the city,” he said, further shedding light on how far literature had evolved since seventy years of Pakistan’s existence.

Sheeba Alam was the host of the show. Her Urdu was like an orchestral playing of great finesse.

As expected, Aitezaz Ahsan left the audience spellbound as he reminisced about his childhood spent in Faisalabad, then known as Lyallpur. He then narrated his chronicle of perseverance against dictator Zia-ul-Haq and his wearying time spent in Central Jail, Faisalabad. He concluded his speech by urging the youth to question indictable, delinquent behaviour. “Uthain gai magar dher se is sher k basi ye khitai Punjab hai Iran tou nahein.”

I.R Rehman mentioned the likes of Dr.Taseer in his speech and discussed his progressive movement for Urdu literature.

Zehra Nigah, the president of this year’s Literary Festival shared a witty encounter that she had with  Ayub Khan and reinstated an essence of hope in the youth. “Pakistan! Acha waqt anay wala hai,” she exclaimed.

The evening concluded with an entrancing performance by Ustad Hussain Baksh Gullu.

Faisalabad’s literary lovers delved into a World of words for the two-day event and I definitely hope for more to come.

The writer is a law graduate, a translator at Lok Virsa Heritage Museum and a women’s rights director at an NGO. She can be reached at zahra.ali.khan786@gmail.com