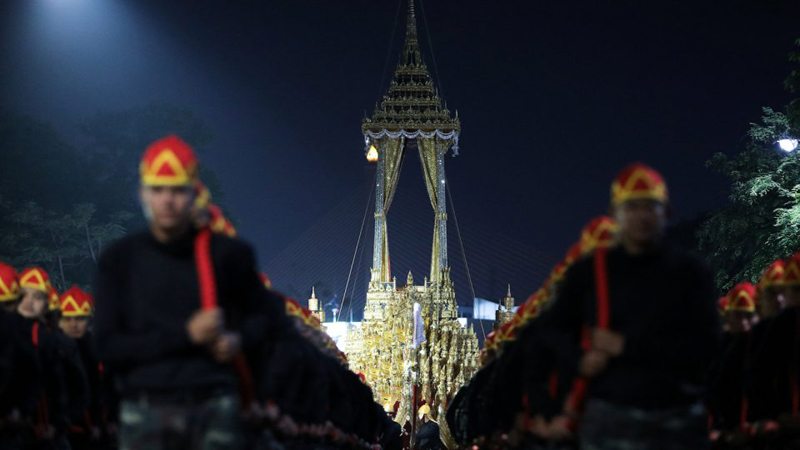 While Thailand officially mourns, its stock market has started to rejoice. The Stock Exchange of Thailand (SET) index hit its highest level in 24 years earlier this month, breaking through a psychological barrier dating back to the country’s pre-1997-98 Asian financial crisis boom, though still below the market’s all-time high of 1,789 hit in January 1994. The market has surged nearly 10% over the last six weeks.

That’s sparked a local debate about how much the country’s ruling military junta can take credit for the recent gains. Through the first seven months of this year, the SET was flat while other regional markets soared, many of which have hit new historic highs in recent weeks. The SET was among Asia’s best performers, up over 20%, in 2016.

But slow economic growth of 3.5%, high household debts, industrial overhang and slower than expected infrastructure spending – not to mention a nationwide period of mourning for last year’s death of long-reigning monarch Bhumibol Adulyadej – had until recently contributed to this year’s subdued market spirits.

The SET has risen with the lifting of certain political clouds. The bourse’s bounce began near the time coup-ousted ex-premier Yingluck Shinawatra fled into self-exile ahead of an anticipated August 25 court verdict on criminal negligence charges; she was sentenced in absentia in September to five years in jail for the crime.

Some had feared a guilty decision might ignite anti-coup instability, but there was barely a peep of dissent against the decision. Premier Prayuth Chan-ocha has since vowed to hold democracy-restoring elections by November 2018, a market-friendly scenario, though it wouldn’t be the first time the ex-army commander has promised then withheld new polls.

What is clearer is the junta’s intent to manufacture an economic upswing coincident with the transition from lamenting Bhumibol’s death, which will come to an official close on October 26, to celebrating new King Vajiralongkorn Bodindradebayavarangkun’s crowning, expected in either December or January.

Next year’s fiscal budget aims to pump up public investment through big outlays on rails, roads and airports in a feel-good state spending spree. Local investors, including big state funds, have by some market readings bought into that upbeat narrative, despite three years of disappointing budget disbursal rates under military rule.

Local investors poured US$1.8 billion into the bourse this year through the first week of October; net foreign inflows were only US$279 million over that period. Locals have bought in partly due to a lack of better financial options, with bank lending muted amid low factory usage rates stuck at 60% and household debt levels the third highest in Asia at 80%, according to central bank statistics. Lacking local growth and import demand combined with a recent recovery in exports have ballooned the country’s current account surplus to 10% of gross domestic product (GDP). Those fast inflows, which the Bank of Thailand has only partially sterilized, have appreciated the baht, Asia’s best performing currency in this year’s first half.

The junta’s proponents claim the market’s recent rally has been underwritten by the political stability and strong governance imposed after the May 2014 coup. While some suspect the regime may have withheld certain stimulus measures this year out of subdued respect for the deceased Bhumibol, it’s still not clear the junta has the wherewithal to spur upbeat growth if and when it wants to. Former finance minister Korn Chatikavanij told Asia Times the market’s recent uptick had “nothing“ to do with the junta’s economic policies and has been driven mainly by a rebound in corporate earnings. “I know why I invest in the stock market,” he said, “and it has nothing to do with politics.” Other investment analysts concur the market’s new lift has little to nothing to do with the sectors of the economy over which the junta has command control and to date has been mostly export-driven. The International Monetary Fund recently recommended Thailand should use fiscal policy more to support demand and rebalance the economy. While the junta promises big spending in 2018, bureaucrats are still reluctant to sign off on projects that could be targeted as criminally corrupt with a change in government, a precedent the junta has firmly set with, some say, politicized purges.

While some Thais have punted on a post-mourning new era upside, the monarchy’s Crown Property Bureau (CPB) has shown a new willingness to diversify its rich holdings, estimated at around US$54 billion mainly allocated in huge local property holdings and Thai company stakes, including in Siam Cement Group, Siam Commercial Bank (SCB) and Deves Insurance PCL. Analysts familiar with the situation say CPB representatives, including new chief investment officer David Wheeler, have in recent weeks gone on roadshows to Hong Kong and New York in pursuit of a more internationally diverse portfolio; CPB last year earned a mere US$300 million on its US$52 billion in assets, equivalent to a .57% market return, the analysts said.