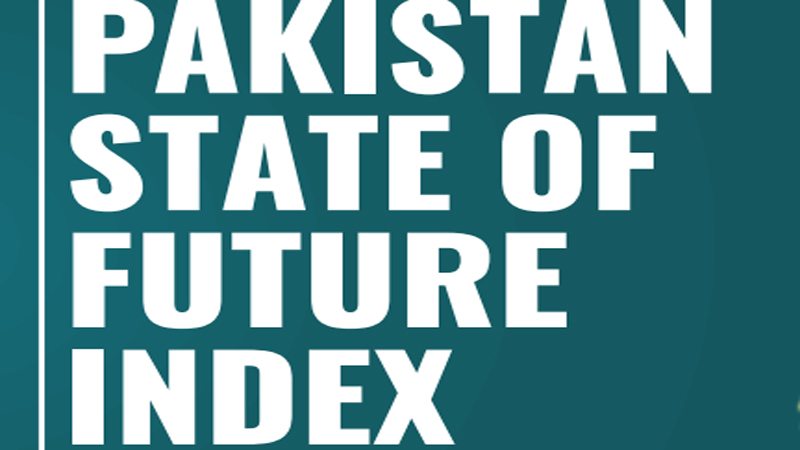 ISLAMABAD: The Pakistan State of the Future Index (PK-SOFI) inaugural study was launched by Foresight Lab, a facilitative platform for communities of interest, on Saturday. Pakistan State of Future Index is a 10-year future index composed of 30 variables that indicate if the future is getting better or worse. It shows 30-year trends of improvement and decline, each variable is forecasted based on 20 years of past data which are then further assessed for the best possible and worst possible values in 10 years.

Foresight Lab Founder & AGAHI Founding President Puruesh Chaudhary said, “With this national study, Pakistan leads the region in futures research in public space. This is where this nation is winning. The dominating trend in the inaugural report indicates that the growth potential of the internet is significant. This index gradually builds confidence, which can help the decision-makers draft policy frameworks where technology could become the core element in ensuring the well-being of the people”.

The State of Future Index was developed by the Millennium Project as an effort to measure the changing state of the future. The index shows whether the conditions, globally and nationally, promise to get better or worse. In 2000, 15 global challenges identified were incorporated for the study to form the statistical foundation. China, South Korea, South Africa, Kuwait, Azerbaijan and Turkey are among the countries with national SOFIs along with some in Latin America, Central Europe and North America, Chaudhary said. Foresight Lab Co-founder & Interactive Group of Companies CEO and Chairman Dr. Shahid Mahmud highlighted that PK-SOFI has the potential of becoming a very useful tool for objectively evaluating the direction Pakistan is heading towards. “This tool intelligently supports the decision-making process of key stakeholders, in order to make informed decisions and achieve optimal results”, he said. Further adding that “a government with a detailed insight concerning what is happening and what is going to happen in their country is able to make effective plans and deploy solutions to improve the quality of life of the population, and therefore can objectively assess the impact of these solutions. This also opens tremendous investment opportunities”.

Foresight Lab in collaboration with its partnering organizations and individuals came together for the compilation of the 2017 inaugural report. More than a hundred Pakistanis participated in the real-time Delphi study; and over 20 academics provided their expert judgment on the variables selected. The study had been scaled between sentiment and sensitivity benchmarks. The variables included in the study were further classified using the STEEP technique which covered the social, technological, economic, environmental and political sphere.

PK-SOFI indicated some improvement in future for the people of Pakistan. The index was computed in consultation with global futures professionals from the Millennium Project and in coordination with local experts from the academic community which included more than 18 universities nationwide. As a result of this development, The Millennium Project CEO and Co-Founder Jerome C. Glenn said, “PK-SOFI is now incorporated in to Chapter 2 of the Millennium Project’s major publication State of Future 19.0 which brings together an extraordinary set of data, information, intelligence and collective wisdom to the decision-makers, opinion leaders, researchers, and analysts”.

UNESCO Futures Chair Sohail Inayatullah stressed how politics in Pakistan had remained past-based; focused on the pendulum between rule of the military and rule of the landlords. He said, “The state of the future index asks different questions: Can Pakistan become futures focused? Can a collective purposeful based vision be created? Can politics be based on where the country wishes to be in 2048 not where it was in 1948? Can today’s decisions be based on where we wish to go, futures we wish to avoid, and the first and second order unintended consequences of these actions. In a nutshell -can Pakistan create tomorrow, today?”

During the inauguration it was said the ecosystem of the new connected world does not have a separate space for nonprofit or public platforms, fenced off from commercial space. Today, the government, private sector, academia, media and the civil society are required to be not only strategic but also human-centric, well coordinated and prompt in service delivery, it was said.

The objective of the lab is to create and foster ecology of foresight perspectives in Pakistan and enable decision-makers to opt for appropriate policy choices and establish strategic narrative in support. AGAHI in collaboration with its local partner Interactive E-Solutions is devising a customized model for computing Pakistan’s futures discourse which will have the ability to track the expected state of the future over time at national, provincial and district levels. Eikon7, AGAHI’s design partner is developing the interface for the end-user, it was said.