Collective responsibility refers to the shared responsibility of a community where each individual participates responsibly for a healthy society. Hillary Clinton once said “Our responsibility as citizens is to keep doing our part”. The woeful incident of an oil tanker leakage and blast in Bahawalpur reinforces the realisation of collective responsibility in the community. The incident took the lives of more than a hundred people who were collecting the spilled oil for little benefit. This tragic incident poses a question to all of us regarding who is responsible in such cases.

Is it the government, local law enforcement departments, or the people, who were unlawfully attempting to collect spilled oil to earn some money? Primarily, the government polices to eradicate poverty do not seem to be effective, as the act of people collecting oil for little money has cost them their lives. Furthermore, the slow response of law enforcement departments to control the situation by sealing off the area, and the people’s greed for money is also to be blamed. The spirit of collective responsibility from all sides to handle such a situation can save innocent people from painful death.

In our daily life, we take medicines with the belief that their development from the relevant companies /people has resulted only after following the standard protocols with complete collective responsibility.

Drug development processes involve a multitude of scientists, manufacturers and distributors who put forward their best efforts to ensure the production of quality drugs by strictly adhering to the standard manufacturing protocols. People in every domain are performing their duties with utmost responsibility to benefit humanity.

Let us take the example of Artemisinin, a recently marketed new antimalarial drug which was discovered by a Chinese scientist TuYouyou, for which she won the Noble Prize in 2015.

Professor TuYouyou led a joint project of Chinese and Vietnamese governments to help in malarial treatment. After screening thousands of recipes, the compound arteminsine was found to be an effect cure for malaria.

The burnt people could not be treated on time due to lack of burn treatment facilities which led to a rise in the death toll. Overall, poor management, lackadaisical handling from local authorities and lack of collective responsibility led to the tragedy being exacerbated

The team involved in its development did their work with complete dedication and responsibility in finding this new effective antimalarial drug. There are many other examples from history of collective contribution that led to extraordinary benefit for mankind.

The occurrence of such incidents is not uncommon, such incidents happen around the world during oil transportation. In developed countries, such incidents are handled with full coordination and responsibility. The area of incident is cordoned off by a local law enforcement department, and at the same time other relevant departments like local municipal council and medical departments play an active role in tackling the situation, sending injured people to hospitals and cleaning the affected area before re-opening it to the public. Through various information sources and websites, while learning about similar incidents of oil tanker spillage in the world, one hardly comes across any reported casualties. This makes us realise us that local people around in affected areas behave responsibly and sensibly to avoid worsening the situation. 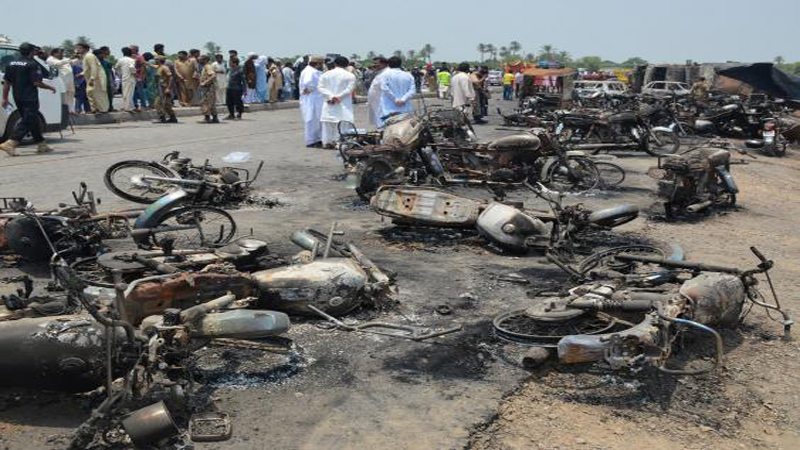 It might be due to fact that the relevant department/authorities handled the issue with responsibility and standard protocols. The data of ITOPF also reports four more incidents of oil spillage in 2016; one in South America, others in Malaysia and two in the US and China. Though there is major financial loss in such incidents, there are never any major casualties.

Oil tanker accidents occur around the world, but they rarely lead to casualties as in the Bahawalpur incident. In the recent incident, the sharing of collective responsibility between concerned departments and local people did not take place at all resulting in death of people who were collecting spilled oil for little gain. The medical facilities for burn victims in local hospitals were inadequate, this was a major factor which led to more casualties.

The burnt people could not be treated on time due to lack of burn treatment facilities which led to a rise in the death toll. Overall, poor management lackadaisical handling from local authorities and lack of collective responsibility led to the tragedy being exacerbated.

Such eye-opening incidents are eye-opening require serious attention from government, relevant departments and from the local community.

The responsible departments should be trained through structured programs, involving proper training of the response teams. Different awareness programs should be launched to educate people about how they should respond when such incidents happen instead of displaying irresponsible behavior and putting the lives of other people at risk. As Winston Churchill once said, “The price of greatness is responsibility”.

The writer can be reached at abdul_hameed8@hotmail.com