The majority of South Asia’s home-based workers are said to have experienced, over the past few years, various occupation problems linked to health

Given its multi-dimensional context, women’s empowerment within the South Asia context is perhaps best defined thus: the power to effect socio-economic change provided that structures dictating social, political and economic decision-making are transformed. Because economic empowerment is intertwined with gender equality and equity, changes in policy and social structures — such as mainstreaming women agendas, labour reforms, educational, business development opportunities, and autonomous decision-making for women — are fundamental to any intended change.

Home-based workers represent a large chunk of South Asia’s informal economy, and were said to comprise 19 percent of this sector in 2009-10. Their share in urban areas was put at around 20 percent over the same period. It is estimated that, on a global scale, this group comprises more than 100 million. South Asia is home to more than half of this number; with nearly 80 percent being women.

Across the region, home-based workers are primarily found in almost every low-income urban locality as well as rural areas. This group finds itself largely exploited given its marginal status. Due to the invisibility factor, contribution to the informal economy is often overlooked. The majority of home-based workers are low income earning and enjoy minimal or no labour rights or, indeed, social protection; meaning that most live and work in the most dismal conditions. Daily tasks may range from anything to sewing garments, assembling electronic components to the simple job of sorting, packaging and labelling goods. This group remains dispersed, illiterate, un-represented and off the radar in terms of national data.

Home-based work has proved to be a conceptually ambiguous term. Not least due to the reluctance of national governments to mainstream labour. Indeed, it is only recently that both India and Pakistan have formally recognised home-based work as part of the informal economy; with Sindh and Punjab having approved polices aimed at protecting the rights of this group. Globally, the informal labour force continues to expand as a result of new market forces and technology. This holds similarly true for high income countries. Here, there is an ever increasing percentage of what the social-feminist economist Naila Kabeer describes as “part-time, irregular and unstable forms of work with little or no social protection”, whereas the scope of the regular, stable workforce is reducing.

For the home-based worker, medical treatment eats up a major chunk of an already low income. With barely any savings and little if any access to social security schemes — this group becomes heavily dependent on different sources of borrowing. Thus the state of their finances, health and productivity become intrinsically intertwined

However, due to the nature of their labour and also work space — home-based workers cannot easily be identified by occupation, industry or activity. This led to general unwillingness to include them under the broad-based category of workers. Yet this all changed with the passing of the International Labour Organisation (ILO) Home Work Convention of 1996, which formally recognised this group and its labour. The 2000 Kathmandu Declaration represented a significant step towards securing commitment from the different governments within South Asia to support policies to protect home-based workers.

This is imperative given the prevailing occupational health hazards that come with specific means of production. These include, but are not restricted to, lung problems as well as asthma endured by garment workers who are constantly exposed to cotton dust.

And then there is the matter of long hours spent working with needle and thread leading to eye problems, particularly when it comes to embellishment workers, and other occupational overuse injuries. Like other women, many home-based workers suffer the stress of a double work day, with the demands of their domestic and waged labour largely contributing to health and safety concerns; the same goes for extreme physical stress. The majority of South Asia’s home-based workers are said to have experienced, over the past few years, various occupation problems linked to health. 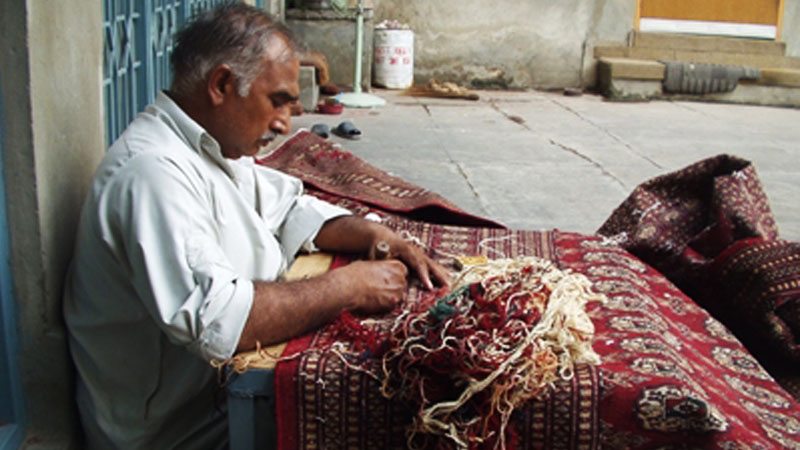 When one disaggregates the above by trade, it becomes apparent that issues pertaining to posture, joint pain, eye strain and the respiratory tract are commonly suffered by all home-based workers. Moreover, those working with incense sticks anywhere in the world complain of breathing difficulties (due to irritation from the incense powder) and headaches. Those working in the pottery and paper industries all suffer from posture-related issues.

While those tied to the knitting and wool industries suffer respiratory and chest problems, due to dust from raw wool. Block printing boutique workers are exposed to harmful chemicals, which can be inadvertently inhaled causing hepatitis. In addition, they may find their eyes and other body parts pierced by very small particles of tin. The dust from these thin tin sheets increases the possibility of TB and cancer in the long-term. In some countries incidences of occupational health hazards are even higher given living space conditions.

Thus for the home-based worker, medical treatment eats up a major chunk of an already low income. With barely any savings and little if any access to social security schemes — this group becomes heavily dependent on different sources of borrowing. Thus the state of their finances, health and productivity become intrinsically intertwined. The time has come to afford this group the full visibility it deserves. Only then will it be afforded social protection.

The writer is a Development Manager and can be contacted at lailazharali@gmail.com