Extermination of history in BJP’s India

According to George Orwell, the most effective way to destroy a people is to deny and obliterate their own understanding of their history. Many attempts have been made by the Rashtriya Swayamsevak Sangh (RSS) to ‘Hinduise’ the educational system, root out liberal influences and in several cases, to re-write history.

Critics are lashing out at the ruling Bhartiya Janata Party (BJP) which encourages distorting history to promote the extremist Hindu agenda in India.“Do you have any idea that the Taj Mahal was once a temple to the Hindu god Shiva?” These views are not of academic historians but the RSS in India. Sangh Parivar refers to the family of Hindu nationalist organisations that was created in 1926 with the founding RSS. In 1964 the cultural and religious branch of the movement, Vishwa Hindu Parishad, was founded.

That movement founded its political arm as the Jana Sangh in 1956, but reorganised as the Indian People’s Party or Bharatiya Janata Party (BJP) in 1980. Members of RSS have been involved in many incidents of mass violence against Muslim and Christian minorities in India. Mahatma Gandhi was also assassinated by a former RSS member in 1948. “No literature of the RSS advocates discrimination against minorities or the formation of a theocratic state,” Welcome to the RSS post-truth narrative, as interpreted by Dr Rakesh Sinha in his article titled, ‘Of Swayamsevaks and intellectuals’.

Among the pearls of wisdom books introduced by the BJP impart is the astonishing fact that the first aeroplane was invented so that the Hindu god Ram, his wife Sita and his brother Laxman could fly from India to Sri Lanka

The RSS has sought to spread a Hindu-centric version of Indian history through its organisations and educational institutions such as the Saraswati Shishu Mandirs and Vidya Bharati primary and secondary schools. As Mridula Mukherjee and Aditya Mukherjee, in their article titled “The Communalisation of Education and the History Textbook Controversy put it, ‘some books for elementary school students portrayed all communities other than the Hindus as foreigners in India.’

These books, in the name of instilling patriotism and valour among Indians, spread falsehoods, treat mythological religious figures like actual historical figures and make absurd claims such as the struggle for India’s freedom became a ‘religious war’ against Muslims.’ RSS members in India have been taught these ‘facts’ for years in its 20,000 religious schools.

A highly derogatory description of Christian priests have been included in a Grade-VIII History textbook; “The accumulation of power and wealth in the hands of the priests resulted in a perversion of the religion. Some of the priests became pleasure loving and badly behaved.” It comes as no surprise that history has turned into a battlefield for religious identity. This has been an old priority of the BJP. 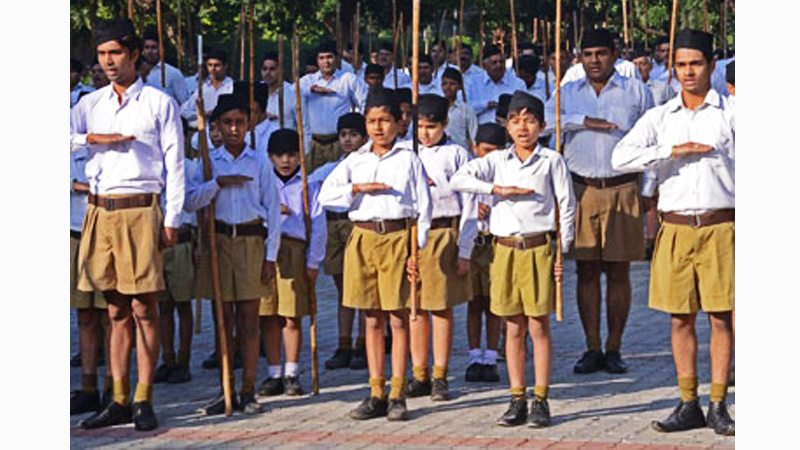 In fact, within four days of its federal election victory in 2014, plans were announced by the Hindu right-wing government to rewrite public school textbooks on a larger scale, known as saffronisation, because the Hindu priests always wore saffron-coloured robes. Drastic changes have been witnessed in the states where the BJP has its strongest foothold. For instance, nine new textbooks for Grades 1 to 12, written by Hindu ideologues have been introduced in Gujarat. Among the pearls of wisdom these books impart is an astonishing fact that the first aeroplane was invented so that the Hindu god Ram, his wife Sita and his brother Laxman could fly from India to Sri Lanka. The Hindutva brigade is using history as a tool for mythmaking and promoting Hindu nationalism.

In Rajasthan, Gandhi and former Indian PM Jawaharlal Nehru have been excluded from history books. The revised books will now teach Indian students that Emperor Akbar got conclusively defeated by Maharana Pratap in the Battle of Haldighati (1576); whereas the historical fact is that the Mughals came out victorious in this battle and inflicted significant casualties among the Mewaris but failed to capture Pratap, who escaped.

A hidden agenda is being incorporated through moral education and history text books, which aim to promote Hindu consciousness and pride in being a Hindu. The BJP government and the Sangh Parivar are promoting the instrumentalist role of history writing for defining the nation as Hindu, which is against the integrity of this discipline.

The writer is currently serving as a lecturer in the department of Political Science and Pakistan Studies at Kinnaird College for Women, Lahore. She can be accessed at sabahshah82@gmail.com or sabah.mushtaq@kinnaird.edu.pk