The news that the leader of the Baloch Republican Party (BRP), Nawabzada Brahmdagh Bugti, has arrived in Switzerland and applied for political asylum may come as a surprise to our officialdom. According to the spokesperson of the BRP, Mir Sher Muhammad Bugti, Brahmdagh “will continue to remain in contact with the UN and other officials, exposing the massive human rights violations in Balochistan”.

Pakistani officials have repeatedly claimed that Brahmdagh Bugti was leading the Baloch insurgency from Afghanistan. Although these claims were never backed up by any proof, government leaders, particularly Interior Minister Rehman Malik, have not only persisted in repeating these claims, but gone further in accusing India of supporting the Baloch insurgents from Afghan soil, an issue that was even raised with Afghan President Karzai. With these latest revelations that Brahmdagh is in Switzerland having his asylum application processed, hopefully those dubious claims will be laid to rest.

However, the issue of Balochistan still remains. The number of Baloch who are ‘missing’ is increasing on a daily basis. Tortured, bullet-riddled bodies are dumped all over the province regularly and incrementally. Our military establishment, the Frontier Corps (FC) in particular, have frequently committed human rights violations in Balochistan. The province has been at the receiving end of the latest heavy-handed military operation since 2006. The military establishment has adopted a policy of systematically killing the Baloch nationalists, which shows the authorities’ short-sighted approach to the severe political problems afflicting Balochistan. Those leaders who have managed to survive the severe repression in the province are underground or in exile abroad. Hairbyar Marri, a former member of the Balochistan Assembly and a son of veteran Baloch nationalist-progressive leader Nawab Khair Baksh Marri, has managed to get political asylum in the United Kingdom (UK) after successfully defending himself against the charge of indulging in terrorist activities.

If the government and military establishment do not put an end to their cruel repression of the Baloch, the situation will only get worse in the province. Blaming other countries for the just grievances of the Baloch will not help either. The illegal transgressions, kidnappings of the ‘missing’, torture and extra-judicial killings of the FC must be stopped. The problem in Balochistan is political. It must be dealt with through political means and not at the point of a bayonet. A political solution is not just critical for Balochistan, but indeed also for Pakistan. * 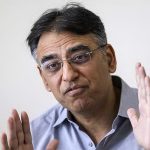