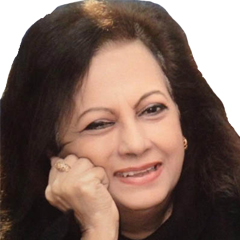 I was keen to find out more about Dr Khalid Aftab, vice chancellor Government College University, Lahore, who was successful during his tenure that lasted for more than a decade in not only arresting the rapid decline the college had suffered in its reputation and standards in the last few decades due to politics and mismanagement, but in turning it around as the premier national university reminiscent of its glorious history. I had met him only briefly in Aga Khan University in Karachi where he had been invited as the keynote speaker on the launch of my book by Ameena Saiyid, managing director of Oxford University Press. I was intrigued when he politely declined the dinner invitation arranged for the speakers. His commitment to academics became quite evident at an early stage and manifested itself gradually in numerous ways that were illustrated in my interview with him on his last day in office.

Government College University has a long history of a century and a half, spilling over with legendary poets, musicians, literary artists, jurists, philanthropists, political leaders, economists and scientists, and their exciting innovations and discoveries in multiple fields. As Dr Khalid Aftab took me for a round of its magnificent buildings of the neo-gothic style, he proudly drew my attention to the plaques and portraits of its distinguished alumni displayed on the walls that included two Nobel laureates, Dr Abdus Salaam and Hargobind Khorana, national poets Allama Iqbal, Faiz Ahmed Faiz, Nasir Kazmi and N M Rashid, internationally acclaimed personas such as Sir Zafarullah, actors like Dev Anand and his brother Chetan Anand, music composers like Khurshid Anwar, and philantropists like Ganga Ram to name a few. With a record of outstanding academic leadership such as Principal G D Sondhi and Professor Bokhari, it was not difficult o understand what a heavy burden rested on the shoulders of Dr Khalid Aftab to carry forward the glorious traditions of excellence in liberal arts and the sciences, as he took charge of Government College in 1993 and became its first vice chancellor in 2002. Through his wise and timely decisions and untiring efforts, he eased the way for Government College to first earn a degree awarding status and later to gain recognition as a leading university of Pakistan.

The challenges that Dr Khalid Aftab faced were formidable. Government College in the early 1980s had become a hotbed of politics with armed gangs of students led by notorious local criminals. The atmosphere was polluted by intolerance, indiscipline, and violence. It required a great deal of courage for the man in charge to get his house in order. Soon after he took over, a surgical operation was undertaken by him and all the unwanted elements were weeded out, including six students who were expelled. Students were banned from dabbling in politics on campus. Despite heavy political and bureaucratic pressure, he refused to succumb to any threat. From then onwards, his leadership was established as it became clear to all that he was a man of integrity and would not do anything that was against the law and the dictates of his conscience.

Dr Khalid Aftab displayed through his leadership that he was a visionary with a firm belief, that the mission of Government College was to offer high quality education so that its graduates could assume leadership roles in multiple fields and serve Pakistan and humanity at large by being tolerant, mature, and responsible citizens. During his tenure, he focused on upgrading the quality of education, rather than multiplying enrollment of the college, by providing professional development opportunities to faculty and strengthening the M Phil and PhD programmes, especially in the sciences, as well as by honing the talents of students through extra-curricular activities in debates, drama, sports, and literary activities. He, as a liberal and forward-looking academic, took concrete steps to enhance human rights and gender parity as well as to channelise the study of Islamiat towards character building so that students could flourish in a tolerant and peaceful academic environment and partake fully in the Ravian fraternity in keeping with its legacy. Dr Khalid Aftab practised what he preached and despite immense pressure from radical religious groups, set up the Abdus Salaam Chair to pay tribute to the Nobel laureate and former student.

The vice chancellor was open and frank in acknowledging the critical role of his parents and teachers in forming his character and shaping his personality, and narrated how one day his mother rebuked him for admonishing a cleaning woman in their home, asking him to apologise for his rudeness. His love for poetry became evident in our discussion on the status of regional languages, especially Punjabi, as he recited long verses of Faiz in his poem ‘Rab Sucha’, and Waris Shah’s ‘Heer Ranjha’, thus displaying his soft side. He also appreciated the support of his wife Roohi, who is a distinguished academic, in helping him give his time and sole attention to his work.

Academics such as Dr Khalid Aftab are national treasures and need to be valued by the state and the Higher Education Commission. As I was going back I could not but wonder what the future of GCU would be after him and contemplated on the dire need of an educational leader with vision, courage, and integrity to take his mission forward.

The writer is Professor and Dean, School of Education, Beaconhouse National University, and a former Woodrow Wilson Pakistan Scholar. She can be contacted drsabihamansoor@gmail.com