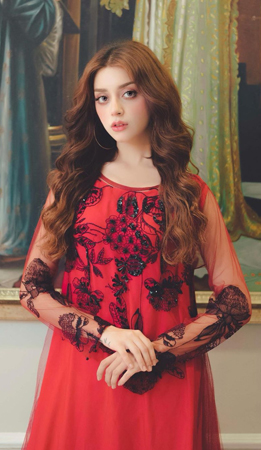 Showbiz starlet Alizeh Shah bid farewell to her latest project ‘Taqdeer’ with a new video going viral on social media. The celebrity turned to her account on the photo and video sharing application in the early hours of Tuesday and reposted a fan edit, to officially bid adieu to the much-loved character of Roomi from the serial.

A fan made a montage of several cute moments of the actor from the show and put an audio mashup in the background. Sharing the clip on her Insta feed, Shah captioned, “thankyou so much for giving roomi all the love” The viral video was played thousands of times within hours and received countless praising comments for the character on the gram. About the drama serial ‘Taqdeer’, Alizeh Shah essayed the protagonist Romaisa aka Roomi, wife of Asad in the play. The ensemble supporting cast of the play included Sami Khan, Zain Afzal, Asim Mehmood, Javed Sheikh, Bahroz Sabzwari, Maryam Noor, Aliya Ali and Khalid Anam.

‘Taqdeer’ – written by Doorway Entertainment and directed by Mohsin Talat – aired its final episode 56 earlier this month, on ARY Digital.