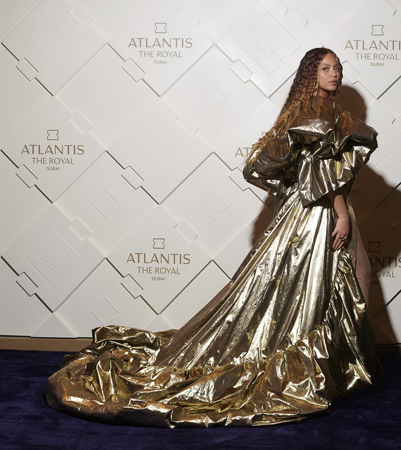 Beyonce sparked reactions after she accepted $24 million to perform in Dubai because of the anti-LGBTQ policies of United Arab Emirates.

After dedicating her album Renaissance to her late uncle Johnny and the LGBTQ+ community, the singer “disappointed” her gay fans with her latest gig.

Bev Jackson, the co-founder of the British advocacy group LGB Alliance, said that Crazy in Love singer’s concert in the city “casts a shadow over her support for lesbians and gay people.”

“Beyonce? is a huge icon for many gay people,” Jackson told The Telegraph Sunday. “LGB Alliance is deeply therefore disappointed that Beyoncé has agreed to give a lucrative concert in Dubai, where same-sex sex acts are a criminal offense, potentially punishable by death.”

Fans of the Grammy winner also took to Twitter to express their disappointment over the fact that Beyonce? forget about the LGBTQ community while accepting whopping sum of money for the concert.

“When you’re that rich.. largely, if not entirely, through the fierce loyalty of LGBTQ+ fans – what amount of money is simply too much to turn down to perform in a homophobic country?” one tweet read.

Another fan wrote, “Beyoncé isn’t a LGBTQ+ ally when she’s performing for money in Dubai and she literally doesn’t need a penny of it.”

“So wait, lemme get this straight,” one user said. “@Beyonce comes out with a whole album dedicated to the LGBTQ community and then goes to perform for the first time in years in Dubai?! The same Dubai that’s vehemently homophobic…?”

Another chimed in, “You cannot say you’re an ally to the LGBTQ+ community when you take money from a country that KILLS people for being gay. (Expletive) doesn’t work like that. I am talking about Beyoncé.”

“Let’s be honest now beyonce doesn’t give a about lgbtq+ rights, she saw a fat cheque and took it,” one angry user commented. “It’s a shame that so many gay male fans of hers are so delirious that they’re defending her performing there too.”