The Council of Pakistan Newspaper Editors (CPNE) has issued the “Pakistan Press Freedom Report 2022”.
According to CPNE’s “Pakistan Media Freedom Report 2022”, four media persons were killed during the performance of their duties.
According to the report, freedom of media in Pakistan faced exacerbating scenarios of jeopardy in 2022 whereas freedom of speech was continuously suppressed and sabotaged. 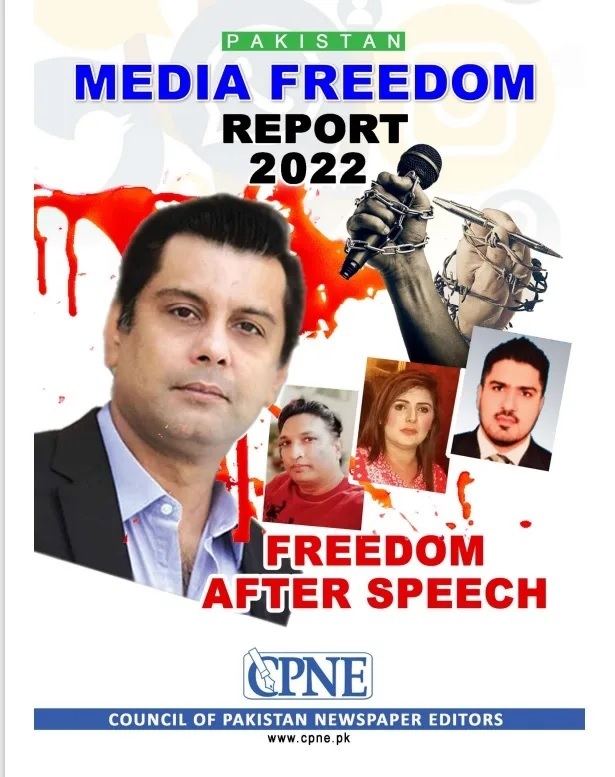 KARACHI – January 22, 2023: The Council of Pakistan Newspaper Editors (CPNE) has issued the “Pakistan Press Freedom Report 2022”. According to the report, freedom of media in Pakistan faced exacerbating scenarios of jeopardy in 2022 whereas freedom of speech was continuously suppressed and sabotaged. According to CPNE’s “Pakistan Media Freedom Report 2022”, four media persons were killed during the performance of their duties.

The inhumane murder of well-known anchor and journalist, Arshad Sharif, Athar Mateen, and Zia-ur-Rehman Farooqi has exposed the mendacious claims of media freedom by the government and authorities whereas the death of Sadaf Naeem, a female reporter, and journalists, during the performance of her duty as consequences of substandard safety measures.

The Federal, a coalition-led government, further advanced the anti-media policies of the PTI Government, and infringe their claims of media freedom. It further continued revengeful and retaliative practices as per the previous government of PTI. According to the report, freedom of media and freedom of expression in Pakistan on the latest world index ranked 157th which is 12 points worse off, compared to the year 2022.

Despite the ruling of a new government in 2022, the malicious intimidation tactics to oppress media freedom, freedom of expression, and information accessibility remained unchanged. These statistics and stated incidents in the issued report, are derived from Media Monitoring Desk set up at CPNE Secretariat, gathered from first-hand information, various media sources, newspapers, and news websites, and carefully composed after thorough investigation by CPNE’s Press Freedom and Monitoring Committee.

As indicated in the report, the most gruesome murder case on the line of duty is of Anchor & Journalist Arshad Sharif in Kenya, of which accusations are allegedly being pinned on certain people in Pakistan. Wherefore dreadful murder of Arshad Sharif does not only threaten the Pakistani Journalists carrying out international-level investigative journalism but also inculcated fear in prospected candidates and those willing to join the media profession. The influential and authoritative people manipulated, threatened, and harassed professional journalists by wrongfully imposing their power, hither and thither.

Undemocratic black law, enacted by PECA (Prevention of Electronic Crime) is still forcibly being implemented and some of the clauses are negatively impacting the freedom of journalism and freedom of expression. During the past year, threats and attacks faced by media personnel in the context of freedom of expression, have contradicted the claims of democratic government in Pakistan and reflected the authoritarianism system.

According to CPNE’s report, in 2022 journalists, media employees, and media organizations were subjected to anti-media activities as a result of intolerance and prejudice against media. In more than 28 incidents, 13 journalists faced violence, households of 2 journalists were attacked, 10 journalists were arrested and cases were lodged against them, and 3 female journalists were harassed. In remuneration of factful and truthful reporting about floods and affectees in Sindh, along with Ilyas Samoo, the journalist from Keti Bandar, many journalists from different areas of Sindh were arrested on false allegations under Anti-terrorisms Act.

The case based on false allegations against Waqar Satti, an Islamabad-based journalist, under Blasphemy Act is still pending irrespective of clear instruction by High Court. Moreover, journalists also face self-censorship and other restrictions. Also, in 2022, online harassment against journalists continued. Various defamatory trends were run against journalists and media organizations. Social media trends backed by some religious and political groups triggered serious life and safety threats for journalists. Some journalists, did not tolerate persistent oppression by powerful groups, moved abroad and even there they kept their identity hidden so that they do not meet the same end as Arshad Sharif. To combat this situation, there is no sufficient, transparent, and unbiased system available to keep data records of attacks against journalists.

Online trolling was carried out against numerous male and female journalists including Shifa Yousafzai, Ghareeda Farooqi, and others. Similarly, walking on the same path as the previous government, the current coalited government persisted in using advertisements as a deterrent against journalists.

Journalists and employees of media organizations faced nonpayment of salaries in addition to several other issues. However, continued efforts by CPNE resulted in the implementation of media policy by the PTI-led previous federal government for direct payments to media organizations instead of payment through advertising agencies improvement. Although, Punjab Government is still disinclined to implement a system of direct payment to media organizations while in Sindh Government, unjust distribution of advertisements and prolonged outstanding amounts, and lethargic behavior, newspapers, and magazines underwent extreme financial turmoil and were shut down.

It depicts that for freedom of expression, federal and provincial authorities are non-serious. As mentioned in the report, legislation for the protection of journalists and the establishment of the Journalist Protection Commission under the headship of the Retired Justice Rasheed A. Rizvi is considered to be a prospective act but still waiting for implementation.

The Council of Pakistan Newspaper Editors (CPNE) has warned in its report that history is the witness of major incidents and downfalls like Sakoot-e-Dhaka (Fall of Dhaka), under the consequences of sabotaging media freedom. Subsequently, patriotism calls for policies as per media suggestions so that democracy prospers, and freedom of expression revives for the betterment of society. We hope that the current government, along with strengthening democracy and the economy, respects the freedom of media considering it an important pillar of democracy. Instead of subjugating and harassing journalists and media organizations, work on policies and interventions for their protection. CPNE pledges to confront any oppression and will never compromise on freedom of speech and freedom of expression.