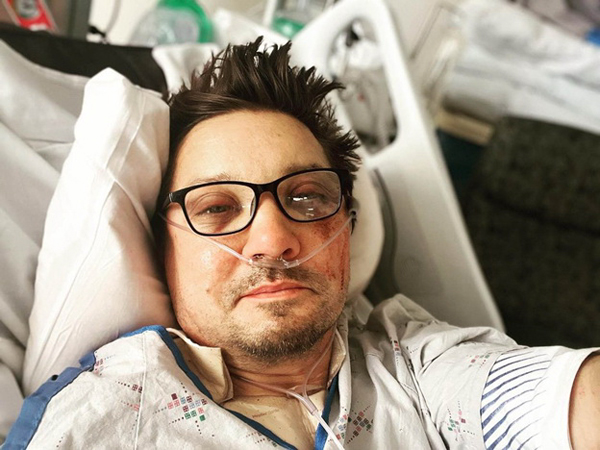 Thirty. That’s how many bones Jeremy Renner broke when he was run over by a snowplow. The Avengers star has been documenting his journey to recovery from his New Year’s Day accident on social media and recently revealed that he returned home from the hospital. On Jan. 21, he offered more details about his horrific injury while thanking his fans for their support.

“Morning workouts, resolutions all changed this particular new years,” he wrote on Instagram, alongside a photo of himself lying on a hospital bed in a private residence and appearing to receive physical therapy. “Spawned from tragedy for my entire family, and quickly focused into uniting actionable love.”

The Mayor of Kingstown actor continued, “I want to thank EVERYONE for their messages and thoughtfulness for my family and I …. Much love and appreciation to you all. These 30 plus broken bones will mend, grow stronger, just like the love and bond with family and friends deepens. Love and blessings to you all.”

On Jan. 1, Renner was run over by a 14,000-pound PistenBully snowplow he had used on his property in Reno, Nevada, and was rushed to a hospital.

Washoe County Sheriff Darin Balaam told reporters the vehicle began rolling on its own after Renner used it to extract his car, driven by a family member, out of the snow. “In an effort to stop the rolling PistenBully, Mr. Renner attempted to get back into the driver’s seat,” Balaam said. “It’s at this point that Mr. Renner was run over.”

The actor suffered blunt chest trauma and orthopedic injuries as a result of the accident and underwent surgery. Days later, Renner spent his 52nd birthday in the hospital.

On Jan. 16, Renner tweeted that he was “very excited to watch” the season two premiere of Mayor of Kingstown “with my family at home.”