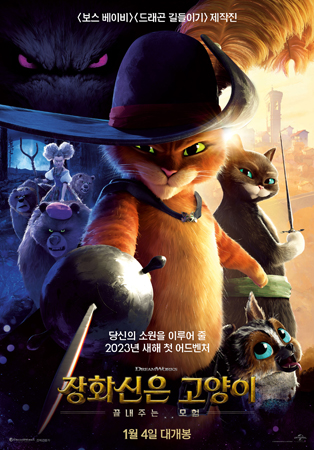 We’re reminded, as the movie opens, that we’re in a fairytale – a world full of familiar characters and magic. And so the sequel for the spinoff to the ‘Shrek’ franchise reintroduces us to the world of characters that we’d all most likely heard of growing up in a fable or rhyme.

Puss in Boots is the life of the party until he is interrupted by the governor, unhappy with the uninvited guests in his mansion. Puss deftly takes his enemies’ blades and the party explodes in another round of cheer for their dashing, fearless hero. The Sleeping Giant of Delmar awakens in the Dark Forest, furious at being disturbed and unleashes havoc on its path. In a sequence that looks straight out of ‘Attack on Titan’, Puss goes in for the tackle and nails it – flawless execution and all. Then, Puss meets his end. 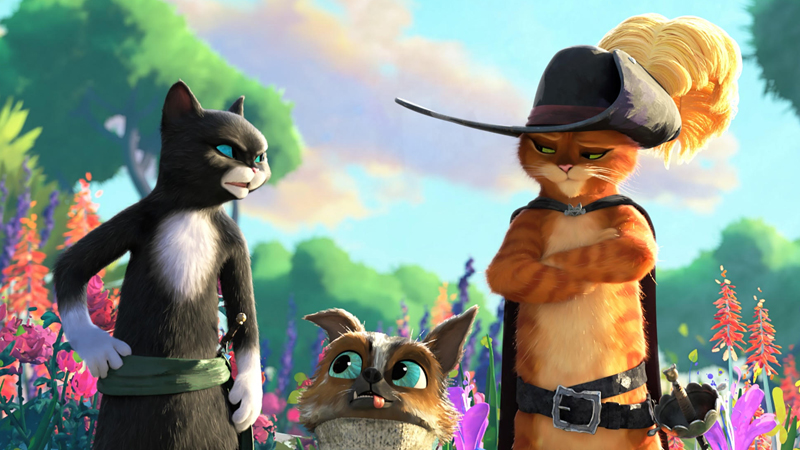 Waking up in the village doctor’s office, Puss gets bad news. Down to his final life, the village doctor/barber recommends that Puss finally hang up his feather hat for good. Puss refuses, but a new, fearsome nemesis appears – beating him within an inch of his life, forcing Puss into hiding for good. Puss’s life of quiet solitude doesn’t last too long when Goldilocks and the Grizzly Crime Family – Mama Bear, Mama Bear and Sonny Bear come looking for him, forcing him out of solitude and his own quest. Followed by the perennially optimistic stray, Dog and reuniting with Kitty Softpaws as they steal the map from the ever so unhinged Jack Horner, the odd trio make their way to the Wishing Star. The movie relishes in its nods to other fairy tales, with the ‘Magic Carpet’, the ‘Lilliputians’, to the ‘Mythological Phoenix’ featured in key cameos. Packed to the brim with sympathetic characters and surprising depth to the storyline, the movie is as likely to tug at your heartstrings as it is to immerse you in its slickly animated world. An artful mix of 2D and 3D animation styles delivers aesthetically pleasing, extremely fluid animation. The movie misses no opportunities to pay homage to its titular character and inspirations. The movie provides us with enough opportunities to appreciate Banderas’ charm as the embodiment of both “Puss” and “Zorro” shining in those moments. Touching on some genuine emotional range, Puss’ fear runs authentic as he is stalked by the Big Bad Wolf, circling around him like a predator toying with his prey. The impressive voice acting by Wagner Moura as the Wolf poses a darker, more sinister threat; and adds a touch of depth and substance to Puss’s purpose, inspiring genuine fear for his fate. At moments it seems like the plot tries to take on too much with its branching subplots and plot devices. Ultimately, the final showdown is absolutely tense and the film juggles its many, many characters – managing to somehow land successful payoffs of all those setups that had been carefully seeded within the story. Suave, humorous and vivacious, ‘Puss in the Boots: The Last Wish’ makes for a strong contender for the best film in the franchise. Guaranteed to be a fun weekend family outing, it is also a poignant, beautifully rendered tale that could be an excellent introduction to the charm of old fairy tales to children.