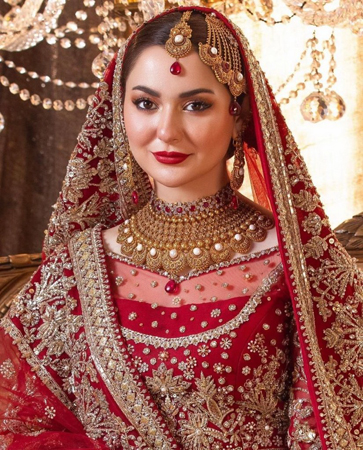 Hania Aamir is a brilliant Pakistani television and film actress. Her recent popular drama Mujhe Pyaar Hua Tha is getting a lot of praise. Fans are loving the triangle love story of Maheer, Areeb and Saad. In the latest episodes, Maheer will get married to Areeb. Saad is betrayed and fans are with him. The drama has been directed by Badar Mehmood. It’s a Big Bang Productions presentation.

Hania Aamir’s bridal look from the drama is getting viral. A sad scene of Hania Aamir is making waves on social media in which she is crying in her beautiful red bridal dress which is backless and it also has a very short top. In the drama, Maheer is shown as a middle class girl whose family is quite conservative but she is wearing a see-through dress. Facebook users especially girls are saying that if we will wear such a dress on our wedding or at any function our mothers will deal strictly with us and we won’t be allowed to wear. Everyone said that the dramas’ concept of middle class is quite near to the upper and modern elite class. Many other trolls Hania Aamir on her personal pictures as well. Fans were sad over the small detailings in the drama which are missed by the drama makers.