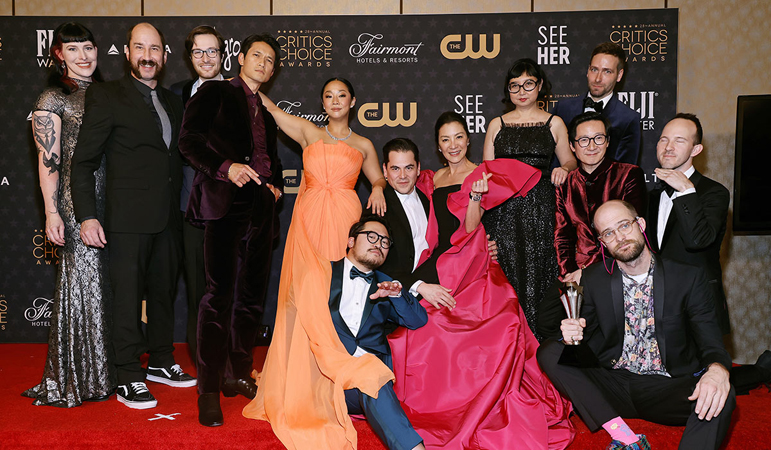 The time-and-space-twisting film “Everything Everywhere All at Once” was a big winner at the 28th annual Critics Choice Awards, presented on Sunday at the Fairmont Century Plaza and broadcast live on The CW. Nominated in 14 categories, the most of any movie, “Everything Everywhere” won the following honours: Best Picture: The cast and crew of “Everything Everywhere” gathered on the stage after emerging victorious from a crowded field: “Avatar: The Way of Water,” “Babylon,” “The Banshees of Inisherin,” “Elvis,” “Glass Onion: A Knives Out Mystery,” “RRR,” “Tár,” “Top Gun: Maverick” and “Women Talking.”

Best Supporting Actor: Ke Huy Quan won for playing Waymond Wang in “Everything Everywhere.” He previously won a Golden Globe. The ceremony reunited him with his co-star from “Encino Man”, Brendan Fraser, who was named best actor for “The Whale.” Also nominated for best supporting actor: Brendan Gleeson, “The Banshees of Inisherin”; Paul Dano, “The Fabelmans”; Judd Hirsch, “The Fabelmans”; Brian Tyree Henry, “Causeway”; Barry Keoghan, “The Banshees of Inisherin.”

Best Production Design: Jason Kisvarday and Kelsi Ephraim were nominated for “Everything Everywhere,” one of six films in the running. The award went to Florencia Martin and Anthony Carlino for “Babylon.”