Pakistan to make progress under flag of Imran Khan: Elahi 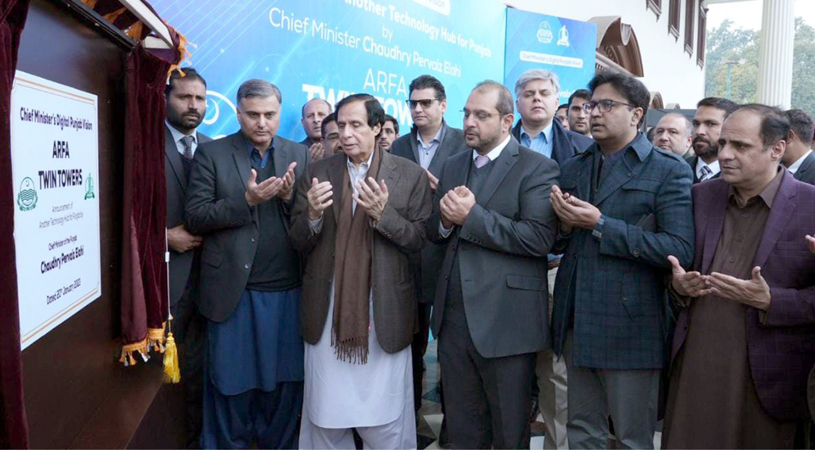 Chief Minister Punjab Chaudhry Parvez Elahi said that Pakistan will make great progress under the flag of Imran Khan. CM apprised that more than five years work has been done in the last more than five months. Time has arrived to strengthen the hands of Imran Khan. Imran Khan all the time thinks to bring a positive change in the life of a common man. We all should pray for the health and long life of Imran Khan adding that leadership is in the strong hands of Imran Khan. Imran Khan prepared an excellent team in every sector including overseas. CM Parvez Elahi while addressing the cheque distribution ceremony among the Bar Associations stated that the Sharif family ruled over the country for such a long period of time but can not buy a vegetable by visiting alone. CM maintained that service to the religion was the vision of Imran Khan on which we vigorously worked. According to the vision of Imran Khan the Punjab government incorporated Aqeeda-e- Khatam-e-Nabuwat (SAW) in the marriage certificate and also established Khatamun Nabiyeen (SAW) University. Nazra and Quranic translation was declared mandatory for the students and without reciting no one can become a doctor, engineer or a lawyer. CM said that through Quran-e-Kareem Portal perversion and disgrace to the Quran Kareem will be eliminated through an automated mechanism. The book on which Khatamun Nabiyeen (SAW) is not written before the Holy Name of Hazrat Muhammad (SAW) will be confiscated. He said that if the grievances of a common man are not timely redressed then the question is raised on the system. The respect to the judiciary is highly essential as after Allah Almighty only courts can grant justice. CM highlighted that since 2002 to date whenever he was given an opportunity then he always worked for the well- being of the lawyers community. Offices of Advocate General and Prosecution were being established. Public Defender Act was being presented to redress and advocate the problems of a common man. The lawyers are being provided health facilities through the health cards. CM Parvez Elahi informed that cancer disease is also treated free of cost through Imran Khan’s health card programme. He said that latest medical machinery like CyberKnife and linear accelerator are being provided in the divisions. Emergency1122 made a record of quick response in minimum possible time. Cheques amounting to Rs.20 crores were being distributed on behalf of the Punjab government to the Supreme Court Bar, Punjab Bar, High Court Bar,District and Tehsil Bars. Khurram Shahzad Virk, Amir Saeed Raan, Barristor Ali Zafar, Hassan Niazi, Ahmed Awais, Jaffar Bukhari, Akhtar Javed and others participated in the ceremony.

Chief Minister Punjab Chaudhry Parvez Elahi chaired a consultative meeting at his office in which Speaker Punjab Assembly Muhammad Sibtain Khan, Sen. Shibli Faraz, Raja Basharat, Hashim Jawan Bakht and Mehmood-ul-Hassan were present. The participants exchanged views about the nomination of the caretaker chief minister and the political situation. The committee set up for the caretaker CM informed about the lack of cooperation from the opposition.

The chief minister expressed disappointment over the opposition’s non-serious stance on the nomination of the caretaker CM and the controversy it has caused. He deemed the opposition’s stance incomprehensible and a reflection of political incompetence. He urged those who are using the nomination for political gain to be ashamed of their actions. The chief minister emphasized that the nomination was made with an open heart, in the best interest of the nation, and that the opposition’s negative attitude is delaying the process for no valid reason. He praised the committee members, Raja Basharat, Mian Aslam Iqbal and Hashim Jawan Bakht, as seasoned politicians who sincerely want negotiations but, unfortunately, the opposition has not reciprocated the same. Parvez Elahi emphasized the need for a caretaker chief minister who can handle the affairs of the caretaker government transparently and effectively.