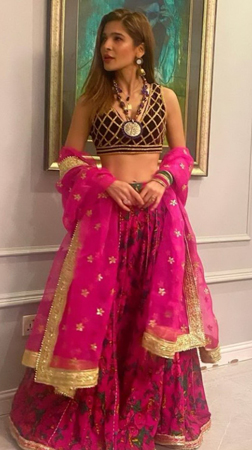 In the viral video, she recited the lines “Har Koi Yaar Naheen Honda Bhalliya..Kaddi Kalliya Beh Ke Soch teh Sahi”. She recited the English translation that was “Not everyone’s your friend..Sometimes sit by yourself and ponder over that”

The ‘Bulbulay’ star said the meaningful verse is not remembered and we realise it later in life. The clip of the actor got thousands of views. She has garnered millions of fans on the social media application Instagram. She treats stunning pictures and videos of her and her projects. Moreover, she also gets her points on social or political issues through the platform. In her latest Instagram post, she posted a picture of her to highlight society’s role in forming a person’s most private thoughts and emotions.

“We seldom realise for example, that our most private thoughts and emotions are not our own, for we think in terms of languages and images which we did not invent, but which were given to us by society,” the quote read.

On the other hand, the actor had hinted at getting married and starting a family soon.

The ‘Habs’ star opened up about her personal life, plans to get married, have children – of herself and adopt. She also confessed that she is now ‘ready’ to be a mother and have a family.

“I think now I’m ready to be a mother and I want to start a family soon,” Omar told the host.

The celebrity said, “I want to get married and adopt two children and somewhere along the way, I’d love to have a baby of my own too.”

She added: “Until now I wasn’t ready but now that I am, things will start happening.”