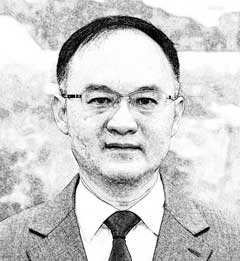 Unswerving Contribution to China-Pakistan Friendship for a Shared Future

• I sincerely wish Pakistan prosperity and its people happiness and health. May the iron-clad friendship between China and Pakistan last forever. May the cooperation between the two countries more prosperous. May China and Pakistan continue to write new legends.

In October 2020, I flew over the towering Karakorum Mountains and arrived in the beautiful city of Islamabad with joy and expectation. Now I feel so reluctant to leave this beloved country to end my tenure as the Chinese ambassador.

Over the past two years, I have been making friends sincerely, promoting cooperation devotedly, seeking development whole-heartedly. I truly felt the iron-clad friendship between China and Pakistan is higher than the mountains and deeper than the sea. I visited four provinces of Pakistan, witnessed the ongoing development of CPEC, facilitated the interaction between the leaders, and enjoyed the enhanced cooperation of various fields.

Looking back on the past two years, the evolution of the international situation has become more profound and complex, the COVID-19 pandemic together with the Ukraine crisis, has brought severe negative impact and much uncertainties to the world, and human society is faced with unprecedented challenges. Under the strong leadership of the Communist Party of China Central Committee with Comrade Xi Jinping at the core, China has continuously made new and great achievements. In 2022, the CPC successfully convened the 20th National Congress, drawing up a grand blueprint for advancing the great rejuvenation of the Chinese nation on all fronts through a Chinese path to modernization, and the solemn mission of building a community with a shared future for mankind. China will act as a responsible major country to promote cooperation and friendship, and inject new dynamics of development for its neighbors, including Pakistan, and the world as a whole.

Against this backdrop, I am pleased to see the high-level interactions between China and Pakistan. The leaders of the two sides have maintained close exchanges through various ways. Last year, President Xi Jinping met with the Prime Ministers of Pakistan three times. Prime Minister Shehbaz paid a successful visit to China in November, becoming the first head of government to visit China after the 20th CPC National Congress. The two sides issued a joint statement and signed 21 cooperation documents. Not long ago, Premier Li Keqiang spoke with Prime Minister Shehbaz, and the new Chinese Foreign Minister Qin Gang had a telephone call with Foreign Minister Bilawal immediately after taking office. The two sides reiterated to promote practical cooperation in key areas and expedite the development of China-Pakistan relations. With the strong guidance of the leaders, China and Pakistan are making great strides towards building a closer China-Pakistan community with a shared future in the new era.

I am pleased to see that China and Pakistan have continued to deepen their political trust. Friendship with China has always been a cross-party consensus in Pakistan. During the 20th CPC Congress, China received 58 congratulatory letters from more than 20 political parties and organizations in Pakistan. The two countries support each other on issues of core interests and major concerns. The Pakistani side firmly adheres to the one-China policy. China supports Pakistan’s sovereignty, territorial integrity, security, and promotes its social-economic development and prosperity. Actions have proved that no matter how the international situation changes, the friendship between China and Pakistan remains unbreakable.

I am pleased to see that the building of CPEC has achieved many fruitful results. From the initial layout focusing on Gwadar port, transport infrastructure, energy and industry, and gradually adding JWGs on social-economic development, agriculture, science and information technology, and international cooperation and coordination etc. CPEC has become an important platform for all-round cooperation between China and Pakistan. Just name some progress for recent two years, as Gwadar East Bay Expressway has been opened to traffic, the construction of the new Gwadar airport has been accelerated, the Technical and Vocational Institute has been handed over to Pakistan. Karot Hydropower Project has got its COD, and K3 Nuclear Power Plant together with TEL and Nova Power Plants all started operation. Both sides agreed to actively promote the ML-1 project and the KCR project.  As a landmark project of “Belt and Road Initiative”, CPEC has brought a total of $25.4 billion in direct investment, $17.55 billion in revenue, $2.12 billion in taxes, and created 192,000 jobs for Pakistan，helping Pakistan to add 6000 megawatts of electricity, 510km of highway and 886km of national core transmission network, laying a solid foundation for Pakistan’s economic and social development.

I am pleased to see that bilateral trade has a good momentum of development. The second phase of China–Pakistan Free Trade Agreement has shown its effectiveness. Supporting policies such as currency swaps have been continuously improved. Facilitation initiatives such as the export of high-quality agricultural products to China have been steadily promoted. The economic and trade cooperation between the two countries has maintained at high level. China has become Pakistan’s largest trading partner for eight years in a row. In particular, Pakistan’s agricultural exports to China are growing rapidly, with a trade surplus of 13 times increase in 2021, and total agricultural export volume is expected to exceed US $1 billion in 2022. During the meeting with President Xi Jinping, Prime Minister Shehbaz said that deepening cooperation in CPEC and other areas with China is the future direction and the only choice for Pakistan. China will join hands with Pakistan to better transform Pakistan’s geographical advantages, resource advantages and labor advantages into export competitiveness and economic growth.

I am pleased to see that cooperation in other fields also has been promoted in an all-round way. As an important pillar of our unique friendship, the relations between the armed forces have achieved fruitful progress, and will deepen cooperation in areas of training, joint exercises and military technology, contributing to the maintenance of regional peace and stability. People-to-people exchanges have overcome the difficulties of the COVID and remained active. More than 140 activities were held during the 70th anniversary of the diplomatic ties. With the easing of the relevant policies and the resumption of flights, the exchanges will surely increase in 2023, the China-Pakistan “Year of Tourism”.

I am pleased to see that the people of China and Pakistan keep assisting and supporting each other in times of difficulties and need. Since the outbreak of the COVID pandemic, China and Pakistan have joined hands and helped each other. When China faced shortage of medical supplies, Pakistan sent a special plane to deliver the medicines. Vice versa, the Chinese government assisted Pakistan with testing reagents and masks, and making Pakistan the first country to receive vaccines donated by Chinese government and army. Last year, Pakistan was hit by historic flood. China sent timely support to its iron-clad friend. Chinese government, military, enterprises, society and individuals provided more than $160 million in aid, ranking first among all countries. At the recent International Conference on Climate resilience Pakistan, China pledged another 100 million US dollars of aid. I myself went to the Bugti district of Balochistan to distribute Chinese relief supplies to the people affected by the flood. As Prime Minister Shabaz said, no country is as sincere as China in helping developing countries. As an old Chinese saying goes, amity between the people holds the key to sound state-to-state relations. The people of the two countries share great love with true sentiments and with concrete actions.

One special episode I would like to share is that in 1956, Geng Biao, then ambassador to Pakistan, planted a bamboo tree in Chinese Embassy in Karachi to commemorate Premier Zhou Enlai’s visit to Pakistan. In 2021, my embassy colleagues and I introduced this bamboo to the Embassy in Islamabad to inherit this good legacy. As time flies, now this bamboo has sprouted new branches, lush and vibrant, just like the friendship between China and Pakistan, which has been passed on from generation to generation.

A Chinese poem goes as “bosom friends could be closer than biological brothers.” I have regarded my Pakistani friends as my brothers and sisters, and Pakistan as my second hometown. The two-years time in Islamabad remains a lifetime of Pakistani friendship. I will leave with the best memories, and my heart will stay in Pakistan forever.

Allama Iqbal said that, many universes exist beyond the stars, more ordeals of love still awaiting. As good neighbor linked by fate, sincere friend sharing weal and woe, and true brother standing by each other, China and Pakistan are now at a new historical stage. We will take the important consensus of the leaders of the two countries as the guide to continuously deepen friendship, jointly promote the CPEC and build a closer China-Pakistan community with a shared future in the new era.

I sincerely wish Pakistan prosperity and its people happiness and health. May the iron-clad friendship between China and Pakistan last forever. May the cooperation between the two countries more prosperous. May China and Pakistan continue to write new legends.

The writer is the Ambassador of People’s Republic of China to Pakistan.