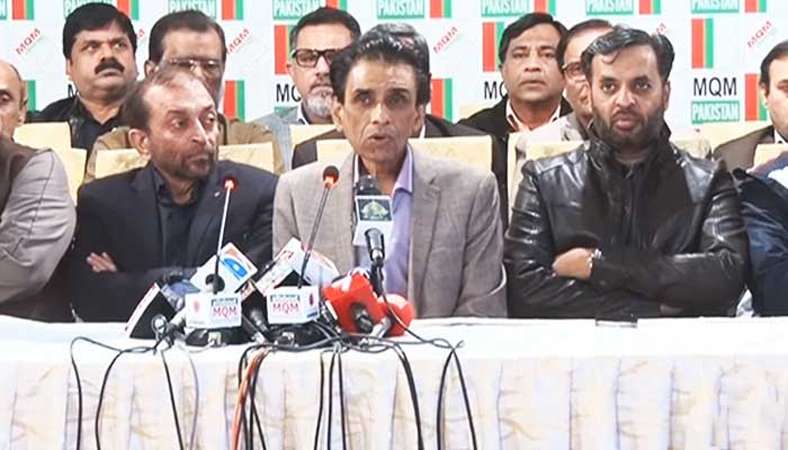 As polling for the second phase of local government elections in Sindh concluded, leaders of the newly-merged Muttahida Qaumi Movement-Pakistan (MQM-P) held a presser rejoicing the “low turnout” in polls on Sunday, terming it already “rigged” in the Karachi and Hyderabad divisions. The party, which boycotted the local body elections, expressed its reservations and concerns regarding the matter of delimitation across Sindh, particularly in the two cities of the province which are considered the MQM-P’s major vote banks. Following its merger with the Syed Mustafa Kamal-led Pak Sarzameen Party (PSP) and reconciliation with estranged leader Dr Farooq Sattar, the party has taken a stand against the allegedly disputed demarcation of constituencies in Karachi and Hyderabad which impacts the MQM-P vote bank in the two divisions. “Today, rigging in the city has lost and Karachi has won,” MQM-P Convener Dr Khalid Maqbool Siddiqui said while addressing a news conference at the party’s headquarters in Karachi’s Bahadurabad area. Leaders of the MQM-P’s Raabta Committee have rejected the local government elections while threatening to quit the Pakistan Democratic Movement-led coalition government in the Centre, demanding redressal of their concerns with regard to delimitation. “The MQM-P’s electoral politics is not dependent on assemblies. We live in the heart of people,” he added. Siddiqui, while claiming a low turnout and also rigging at polling stations, said people had given a referendum on the MQM-P’s decision by not stepping out to vote. “The nation has rejected the pre-poll rigging in Karachi and Hyderabad. They have dismissed the conspiracy to steal Karachi’s mandate,” the seasoned politician said.

Siddiqui also questioned if people would accept the elected mayor following the elections that his party had deemed “engineered”. The MQM-P convener added that the party did not even participate in the 2001 elections, saying that no one would accept these polls as well. “This election has no moral status.” He said, “The people of Karachi, Hyderabad and Tando Allahyar have given a decision in their own favour.” Addressing the Election Commission of Pakistan (ECP) and the government, Siddiqui said: “I ask the ECP and the government if the winning parties can be called the representatives of the people. Will the local representatives be able to represent the people?” Underlining his party’s significance in local body elections, the leader claimed that the turnout had always been high when the MQM-P participated in the poll. Karachi’s seats were reduced by 70 after the recent delimitation, Dr Sattar said. Lashing out at the JI and the PTI, he said that the political parties were with the court on the matter of delimitation of the constituencies.

Even, the PPP admitted that the new delimitation reduced the metropolis’s seats by 50, he added. The MQM-P leader also accused the ECP of showing bias. Referring to lower voter turnout, Sattar said that queues were not seen outside the polling stations today. He added that it would be rigging if votes were found in the ballot boxes. Responding to a question, MQM-P Convener Siddiqui said that his party had withdrawn a contract of saving and forming governments. “Streets are our house [assembly]. Now, we will settle and build it,” he added. The MQM-P leader vowed that they would do “political cleansing” as well as the city’s.