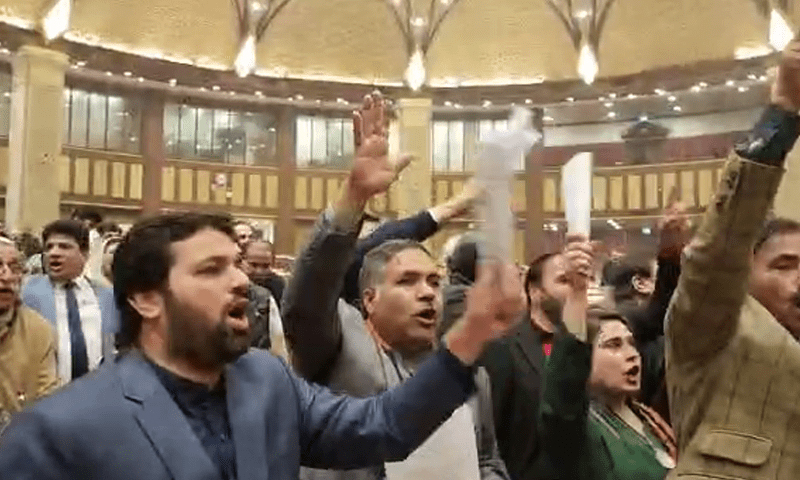 The Punjab Assembly session witnessed pandemonium for a second day in a row on Tuesday with opposition lawmakers raising slogans against Chief Minister Parvez Elahi.

Prior to the start of the session, the doors of the assembly were closed and security guards remained on high alert after yesterday’s session saw ruckus as the opposition challenged CM Elahi to prove he had the requisite numbers to secure a vote of confidence.

However, PML-N lawmakers – who accused Elahi and PA Speaker Sibtain Khan of instructing police to bar their entry – were able to force their way inside. During the session, which began after a three-hour delay, opposition lawmakers once again chanted slogans against Elahi, calling him a “dakoo” (robber) as Interior Minister Rana Sanaullah and PML-N leader Ata Tarar looked on from the visitor’s gallery.

PML-N’s Mashhood, speaking on the floor of the assembly, again challenged Elahi to prove he had the requisite numbers for securing a vote of confidence. “Taking the vote of confidence is your constitutional responsibility,” he said. “If you have the guts, do the voting right now and we will respond with whom the House is standing.” Taking aim at the Punjab government, Mashhood added that the public wanted accountability for “flour thieves”. The PA session was later adjourned till 3pm tomorrow (Wednesday).

Meanwhile, PTI Vice President Fawad Chaudhry said the Punjab government enjoyed the support of 188 lawmakers and had proved who the majority belonged to by passing 21 bills during Monday’s session. He added that the passing of the bills was also an “expression of trust” in CM Elahi.

The PTI leader said that the government had the requisite support for the chief minister’s vote of confidence and would announce its plan of action after the LHC’s verdict on Wednesday (tomorrow). “We want to move forward as soon as possible after dissolving the Punjab and KP assemblies.” Chaudhry alleged that MPAs from Muzaffargarh had told Imran that they were receiving calls from “unknown numbers” and being offered bribes. Addressing Chief of Army Staff General Asim Munir, Chaudhry said that it was important for such matters to be investigated. Earlier in the day, PML-N lawmakers forced their way inside the PA as Sanaullah accused Elahi and the PA speaker of instructing the police to not allow opposition members to enter the premises.

Prior to the proceedings, footage from outside the assembly showed PML-N lawmakers Peer Muhammad Ashraf Rasool and Mian Abdul Rauf clashing with police. Rasool can be seen pushing a policeman away and cursing at them as he forced his way inside the main gate. “Move back. Stop this nonsense,” an infuriated Rasool can be heard saying. After the clash, other opposition members, including Khalil Tahir Sindhu and Zeeshan Rafiq, opened the PA gate and entered the premises.

Meanwhile, Rangers personnel accompanied Tarar inside the assembly. “Today it was said that federal ministers will not be able to enter the PA and their entry is banned,” he told reporters outside the assembly. “I told them that even their fathers can’t stop me from entering [the assembly].” Earlier, Sanaullah had made similar claims, saying that Elahi had banned the entry of opposition lawmakers.

Tarar claimed that PTI and PML-Q did not have the required numbers to take the vote of confidence. He added that CM Elahi could not get the required numbers even if he resorted to rigging. “Yesterday Imran Khan had to face embarrassment because of Elahi’s corruption.” On the other hand, PA Speaker Sibtain Khan said he did not know anything about SAPM Tarar and Sanaullah’s car being stopped from entering the assembly premises.

“I don’t know. I, myself am coming right now. Let me check this first,” Sibtain said while speaking to the media at the PA entrance. “I’m saying whoever did this, it should not have happened.”