* According to reports, 'Hrithik and Saba are in an extremely great space and their families have happily and wholeheartedly accepted their relationship along with Hrithik's kids’ 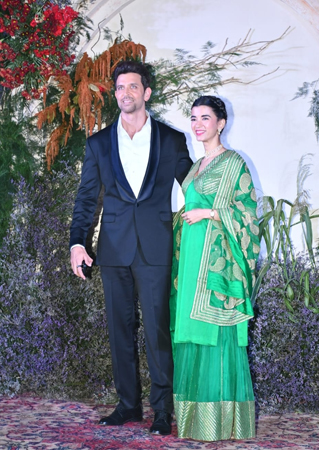 Hrithik Roshan and Saba Azad have expressed their fondness for each other at numerous events; taking it from lunches, dinner dates and exotic vacations the duo has often spotted together. Hrithik has often seen giving shout outs to Saba on social media openly. Now, reports have been circulating that the Hrithik is planning on taking his friendship with her to a next level and that his family is very happy for the two and thinks that Saba is the perfect choice for him.

According to the reports, “Hrithik and Saba are in an ‘extremely great space’ and their families have ‘happily’ and ‘wholeheartedly’ accepted their relationship along with Hrithik’s kids. However, the couple is ‘no rush’ and might come at a tentative date that is by the end of this year as Hrithik and Saba both are currently busy with prior work commitments.”

Reports claimed that their wedding ceremony will not be a grand one rather the lovebirds have decided to have an intimate ceremony with only their close friends and family members. So far, the couple has not released any official statement over the matter. In December, the War actor posted pictures of him spending Christmas with his kids and Azad in Switzerland. Actor’s cousin Pashmina Roshan also joined them on this vacation. Meanwhile, Hrithik Roshan will be next seen in film Fighter alongside Deepika Padukone. On the other hand, Saba Azad has just wrapped up the shoot of her upcoming season Rocket Boys 2, reports News18.