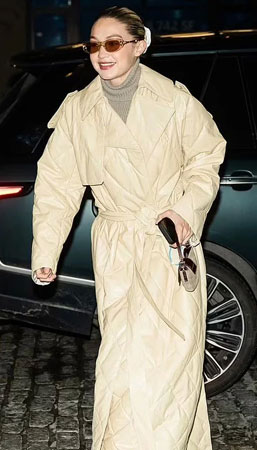 The supermodel turned heads with her gorgeous looks as she stepped out in New York City in quilted oversized tan trench coat.

Hadid exuded glamour as she wore the coat over a grey turtleneck sweater paired with loose white pants while her blonde tresses were styled in sleek bun.

The beauty’s winter fashion also consisted of brown boots and brown-tinted sunglasses. Completing her look, Hadid carried a small purse in her hand as she stepped out her car.

This comes after Page Six reported that Hadid has no issues with the Titanic star romancing other girls as the duo was never serious about each other. An insider also alleged to Entertainment Tonight that Hadid’s relationship with DiCaprio is not over, however, the pair’s romance is not “exclusive” either.