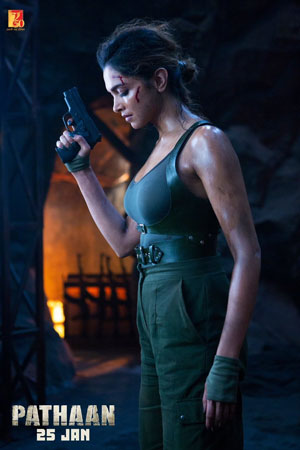 Shah Rukh Khan drops a new poster from his upcoming film Pathaan amid Deepika Padukone’s 37th birthday, also pens a lovely note for her. Taking it to his Twitter account, SRK shared the new poster that featured Deepika and wrote: “To my dearest @deepikapadukone- how you have evolved to own the screen in every avatar possible! Always proud and always wishing for you to scale new heights… happy birthday… lots of love.” It is significant to mention here that Padukone made her Bollywood debut alongside Khan in the film Om Shanti Om therefore he has witnessed her success from day 1. The poster was also shared by Yash Raj Films along with a caption that read: “She can do it all! Here’s presenting the fierce, action avatar of @deepikapadukone from #Pathaan on her birthday! #Pathaan releasing in theatres on 25th Jan in Hindi, Tamil & Telugu.”

Directed by Siddharth Anand, Pathaan is set to hit theatres on January 25. The film also stars John Abraham in as an antagonist. Salman Khan will also be playing a cameo in the film, reports IndiaToday.