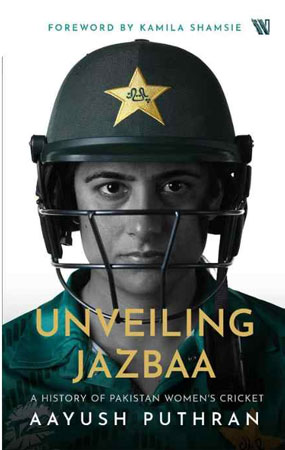 Most of us from the subcontinent are much too familiar with the smirk that accompanied any mention of women’s cricket not so long ago. Women who wanted to play cricket, especially a decade or two back, needed a lot of courage and passion, or jazbaa, as Aayush Puthran, author of Unveiling Jazbaa: A History of Pakistan Women’s Cricket, describes the quality. Apart from overt societal sanction and ridicule, women cricketers had to deal with poor administration, no amenities, no money, no support from the media or the Board (or from men cricketers) and worst of all, no support from their families. In conservative societies like Pakistan where it was sometimes considered un-Islamic for women to play in public, they faced death threats. Puthran’s book documents 25 years of Pakistani women’s cricket, from Shaiza Khan who built it from scratch and Sana Mir who led the Pakistan women’s cricket team to greater heights to today’s superstar female cricketers like Bismah Maroof, Fatima Sana and Javeria Khan among others, and in so doing, pays a tribute to the feisty and courageous women who would not step back despite the many obstacles. It is they who have thus paved a path for women not just in cricket, but in many more ways.

The fact that Pakistan had a tumultuous socio-economic and political background influenced by fundamentalist ideologies meant that women were treated as second class citizens for the most part. Though women from major cities had the freedom to pursue higher education and play cricket thanks to their social and political standing, the vast majority could not aspire to an education beyond schooling or pursue their vision, least of all play sports in public. In this background, two sisters from an affluent business family in Karachi, Shaiza and Sharmeen Khan, who played cricket in England in the early 1980s as schoolgirls, fell in love with the game. When Benazir Bhutto became the Prime Minister of Pakistan in 1988, after ten years of dictatorship and conservative rule, Shaiza Khan decided that if a woman can become the Prime Minister of Pakistan, a women’s team from Pakistan could surely play Test cricket.

Shaiza returned to Pakistan, selected teams, organised matches, negotiated with religious groups that threatened to stop their games and got Pakistan women’s cricket an IWCC membership. In 1997, a smart, elegant and ambitious Pak women’s team showed up to play in the Women’s World Cup in India and, thereafter, played Test matches against Sri Lanka and West Indies. Record-breaking performances by Kiran Baluch who scored a double hundred and Shaiza Khan whose 13-wicket haul in a Test match against the West Indies in 2004 put Pakistani women’s cricket on the world map. Soon more girls wanted to play cricket. Fathers began to bring their daughters to play cricket instead of punishing them.

Having made a beginning against tremendous odds within and without, the story continued. Under Sana Mir’s leadership the new-look team tasted success; they won the Asian Games gold medal twice and beat India twice at the World Cup. Girls like Saba Nazir from Muridke and Nahida Khan from Balochistan, who had to play in secrecy for years, found their passion paying off with social recognition, money and fame. Today Pakistan women’s cricket has the Pakistan Cricket Board’s support with central contracts and cricketer-friendly policies.

Unveiling Jazbaa is a fascinating, inspiring tale of how a game can change society. With little recorded material at his disposal, Puthran, a cricket journalist from Mumbai, diligently researched and compiled a gripping analysis of how Pakistani women’s cricket rose, survived and blossomed, taking care to put it into the context of the socio-politico-economic situation of Pakistan.