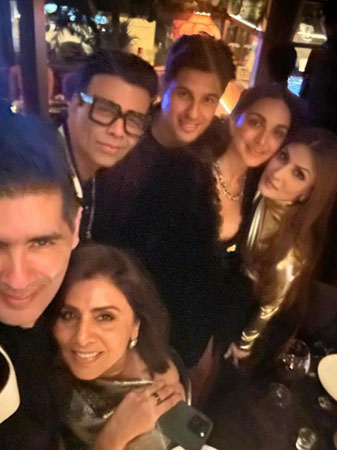 The couple were joined by Neetu Kapoor and Karan Johar at the party in Dubai. Riddhima Kapoor confirmed that the couple is in Dubai and joined them for a party at night.

Riddhima shared a selfie from the party on her Instagram stories. In the picture, Kiara and Malhotra are seen twinning in black and posing together with Karan Johar, Riddhima, Neetu and Manish Malhotra. Neetu wrote, “Quite a starry night.”

Designer Manish launched his store in Dubai and it seems they all gathered to celebrate the occasion.

The second picture shows only Kiara posing with Riddhima, Neetu and Manish. While the mother-daughter duo is seen twinning in golden outfits.

There are speculations that both Advani and Malhotra will be getting married next year even though the couple has not made any confirmation over the news.