* What was earlier touted to be a documentary on the Operation Swift Retort of 2019, will now have a love angle between an Indian journalist and a Squadron Leader 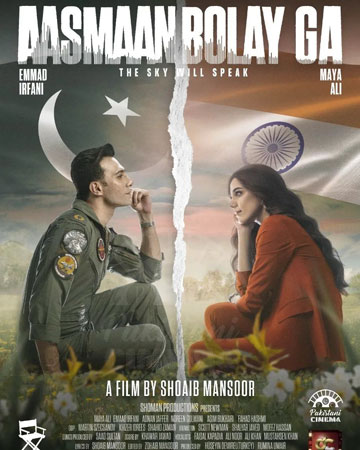 Shoaib Mansoor dropped the poster of his upcoming film Aasmaan Bolay Ga on Wednesday. The poster features Maya Ali and Emmad Irfani staring at each other while sitting on a land divided between Pakistan and India through a lightning bolt. As dramatic and romantic as it looks, it didn’t go too well with the audience.

What was earlier touted to be a documentary on the Operation Swift Retort of 2019 where the Pakistani military managed to shoot down an Indian fighter jet and capture pilot Abhinandan will now have a love angle between an Indian Journalist and a Squadron Leader.

Given the political chaos in the country, a user felt that 2023 is a particularly “bad time” to release anything about the armed forces.

Another felt that the operation was “cool enough” on its own and didn’t need a love affair to bring in an audience.

Another tweep was of the opinion that including a love story might just help the film’s business. “You can’t make people in a country like Pakistan bored with a documentary-style movie, where a single trip to the movies costs you around 2500. This is most likely the motivation behind including a love story in the film. People want to enjoy, they want entertainment,” read the tweet.

The bird app was full of excitement for the return of Khuda Ke Liye maker to the big screen. “Shoaib Mansoor is back, baby,” read a tweet.

Aasmaan Bolay Ga is slated to hit theatres in 2023. On the work front, Ali was last seen in Parey Hut Love alongside Sheheryar Munawar, while, Irfani made a cameo in 7 Din Mohabbat In. Mansoor’s last film was Haroon Shahid and Mahira Khan starrer Verna.