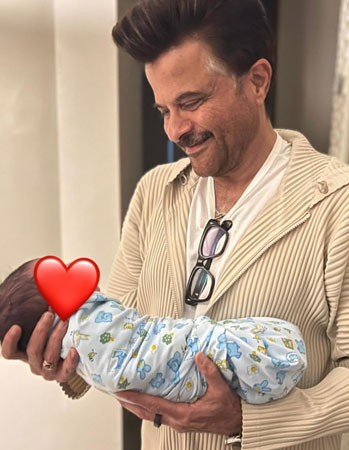 Anil Kapoor superstar of Bollywood celebrates his 66th birthday in the presence of his very dear friends and family members on December 24.
On Sunday, many prominent celebrities were spotted arriving at his bungalow to wish him on his special day.
Anil celebrated his birthday while cheering and dancing with friends and family. He also stepped out his house to meet the media stationed outside his home and also cut cake with them. Celebrities who attended the energetic birthday bash included his brother Sanjay Kapoor with wife Maheep Kapoor and kids Shanaya Kapoor and Jahaan. Moreover, Khushi Kapoor, David Dhawan, Jackie Shroff, Farah Khan, Bhumi Pednekar were also present at the party.
Meanwhile, Kapoor daughter Sonam, who could not attend the birthday party, took it to her Instagram to wish father. She wrote: “Happy happy birthday to the best dad in the whole world. I love you . You’re the greatest and the best. Everything you do you do for us, everyone should be this blessed. Love you Daddy So proud to be your daughter.”
On the work front, Anil Kapoor was last seen in film JugJugg Jeeyo alongside Varun Dhawan, Neetu Kapoor, Kiara Advani. He will be next seen in film Fighter with Deepika Padukone and Hrithik Roshan, reports Indian Express.