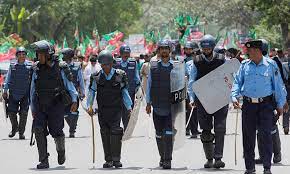 The Islamabad Police released a “special security plan” on Tuesday in response to a suicide attack that shook the nation’s capital.

The law enforcement organisation stated that at least 25 temporary security checkpoints have been set up at various areas throughout Islamabad while announcing the plan on Twitter.

Safe city cameras will be used by the authorities to capture Red Zone admissions, and video of the passengers using the metro bus service will also be taken.

Both locals and visitors were urged by the police to carry identification.

Additionally, the usage of number plates provided by the excise office was suggested to the locals.

The police issued a warning that illegitimate number plates and unregistered vehicles would be subject to legal action.

The locals have also been asked to register tenants and workers with the khidmat markaz or nearest police station. It further added that citizens who hire unregistered local or foreign labour will be subject to investigation.

Police advised people to call their helpline number, 15, to report any odd activities.

This was the first suicide attack in the federal capital in more than eight years, police officials and witnesses had said.

The bombing, claimed by the Tehreek-e-Taliban Pakistan (TTP), took place near the police headquarters on the main road leading to government buildings housing the parliament and other high offices.

Since then, Islamabad has been on high alert and security arrangements have been tightened.